Which two are TRUE of straight-through cable? (Choose two.)

All the other options are incorrect because they are the characteristics of a crossover cable.
Objective: Network Fundamentals
Sub-Objective: Select the appropriate cabling type based on implementation requirements

A. the Session layer
B. the Presentation layer
C. the Application layer
D. the Network layer

Which three statements are TRUE regarding a Local Area Network (LAN)? (Choose three.)

A. A LAN is confined to one building or campus.
B. A LAN can cover great distances.
C. A LAN provides fast data transmission.
D. A LAN is easily expandable.
E. LANs require the use of a router to communicate between local hosts.

The option stating that a LAN can cover great distances is incorrect. A Wide Area Network (WAN) is a network that does not have any geographical boundaries. The Internet is the best example of a WAN.
LANs do not require the use of a router to communicate (although they can be used to connect subnets) between local hosts. Hosts can communicate through a hub or switch.
Objective: Network Fundamentals
Sub-Objective: Compare and contrast network topologies

A router is running several routing protocols, and as a result has learned three routes to the 192.168.5.0 network. Below are the details about the three learned routes:

A router is running several routing protocols, and as a result has learned three routes to the 192.168.5.0 network.

Based on this information, which route will be placed in the routing table?

A. the RIP route
B. the OSPF route
C. the EIGRP route
D. all of the routes

Correct Answer:
C. the EIGRP route
Answer Description:
The EIGRP route will be placed in the routing table. When a router learns multiple routes to a network from different routing table population methods, which includes routes from routing protocols and static routes created by the administrator, it does so in two steps:

How will SwitchB handle the frame it just received?

How will SwitchB handle the frame it just received?

Which of the following features is used with the ip nat inside command to translate multiple devices in the internal network to the single address in the IP address pool?

Correct Answer:
C. overload
Answer Description:
The overload keyword, when specified with the ip nat inside command, translates multiple devices in the internal network to a single address in the IP address pool.
For example: ip nat pool test 172.28.15.1 172.28.15.1 prefix 24
In this example, the NAT pool named “test” only has a range of one address. Another variation of this command is as follows:
ip nat inside source list 3 interface serial 0 overload
This command configures NAT to overload on the address assigned to the serial 0 interface.
When this variation is used, the command uses a list named 3 to determine the addresses in the pool
With static NAT, translation mappings are created statically and are placed in the translation tables regardless of whether there is traffic flowing.
With dynamic NAT, the translation mappings table is populated as the required traffic flows through NATenabled devices.
Override is not a valid NAT option. There is no such option.
Objective: Infrastructure Services
Sub-Objective: Configure, verify, and troubleshoot inside source NAT

Which feature enables a host to obtain an IP address from a DHCP server on another subnet?

Correct Answer:
A. DHCP relay agent
Answer Description:
A Dynamic Host Configuration Protocol (DHCP) relay agent enables hosts to obtain IP addresses from a DHCP server on another subnet. Hosts use DHCPDISCOVER broadcast messages to locate the DHCP server because they don’t know the location of the DHCP server. Because routers are designed to filter broadcasts, the DHCPDISCOVER packet would be dropped unless the router is configured to forward such packets. Enabling a DHCP relay agent on a Cisco router allows it to receive certain types of broadcasts and forward them to special helper addresses.
The following sequence describes an IP address relay process:

The ip helper-address interface configuration command enables a DHCP relay agent on a Cisco router.
DHCP is an enhancement over Bootstrap Protocol (BOOTP) and is used to automate the distribution of IP address to clients from a central server. The BOOTP protocol was also used distribute IP addresses, but was inflexible to changes in the network. DHCP offers three advantages that also address the inflexibility of the BOOTP protocol:

When a DHCP relay is unnecessary, the following steps describe the address allocation process:

While DHCP is very useful in reducing the administrative burden of issuing IP configurations in a large network, Cisco best practices call for using static IP addressing in a small (6 or fewer hosts) network.
All other options are invalid devices or features.
Objective: Infrastructure Services
Sub-Objective: Troubleshoot client- and router-based DHCP connectivity issues

In the given exhibit, which combination shows the components of a bridge ID used for Spanning Tree Protocol (STP)? 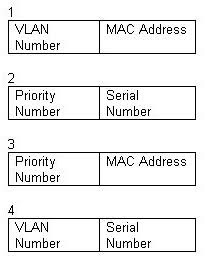 In the given exhibit, which combination shows the components of a bridge ID used for Spanning Tree Protocol (STP)?

Correct Answer:
C. 3
Answer Description:
The bridge ID, also known as the switch ID, is used to elect the root bridge in a redundant network topology. The bridge ID has two components:

Which of the following commands configures an SNMP host to authenticate a user by username and send clear text notifications, the receipt of which will be acknowledged by the receiver?

What configuration is needed to span a user defined Virtual LAN (VLAN) between two or more switches?

Correct Answer:
D. A trunk connection should be set up between the switches.
Answer Description:
To span a user defined VLAN between two or more switches, a trunk connection must be established. Trunk connections can carry frames for multiple VLANs. If the link between switches is not trunked, by default only VLAN 1 information will be switched across the link.
A VLAN trunking protocol (VTP) domain is not necessary to span VLANs across multiple switches. VTP is used to have consistent VLAN configuration throughout the domain.
VTP pruning is used to detect whether a trunk connection is carrying unnecessary traffic for VLANs that do not exist on downstream switches. By default, all trunk connections carry traffic from all VLANs in the management domain. However, a switch does not always need a local port configured for each VLAN. In such situations, it is not necessary to flood traffic from VLANs other than the ones supported by that switch. VTP pruning enables switching fabric to prevent flooding traffic on trunk ports that do not need it.
VTP server mode is not required for a server to span multiple switches. In VTP server mode of operation, VLANs can be created, modified, deleted, and other VLAN configuration parameters can be modified for the entire VTP domain. VTP messages are sent over all trunk links, and configuration changes are propagated to all switches in the VTP domain.
Objective: LAN Switching Fundamentals
Sub-Objective: Configure, verify, and troubleshoot VLANs (normal/extended range) spanning multiple switches