Question 411: A penetration tester has been tasked with reconnaissance to determine which ports are open on the network. Which of the following tasks should be done FIRST? (Choose two.)

Question 412: A technician is diagnosing an issue with a new T1 connection. The router is configured, the cable is connected, but the T1 is down. To verify the configuration of the router, which of the following tools should the technician use?

Question 413: A network administrator configures an email server to use secure protocols. When the upgrade is completed, which of the following ports on the firewall should be configured to allow for connectivity? (Choose three.)

Question 414: An ISP technician gets a call from a business that just changed equipment but can no longer connect to the Internet. The technician checks the ARP table on the ISP switch, and there is no corresponding MAC address present. Instead, the entry is “Incomplete”. Which of the following could cause this condition?

Question 415: Which of the following MUST be implemented to share metrics between routing protocols within the same router?

Question 416: A network security technician observes multiple attempts to scan network hosts and devices. All the attempts originate from a single host on the network. Which of the following threats is MOST likely involved?

Question 417: A user checks an IP address using an external website. The address is different than the one the user sees when opening a command prompt and typing in ipconfig/all. The user does not understand why the two tools show different IP addresses. This is BEST explained by the interworking of:

Question 418: A forensic first responder arrives at the scene where an employee is suspected to have committed a computer-based crime. Which of the following should the first responder do FIRST?

A. Document the scene
B. Take pictures upon arrival
C. Secure the area
D. Implement chain of custody

Question 419: A user reports difficulties connecting a PC to a wired network. The PC connects to an IP phone, which is working correctly. A network technician can verify that other devices successfully connect to the phone. At which of the following layers of the OSI model is the problem MOST likely located?

Question 420: Multiple users are reporting that they are unable to access the network. The ENTIRE network is shown in the diagram. PCs are not statically assigned IP addresses. The following devices will display settings: 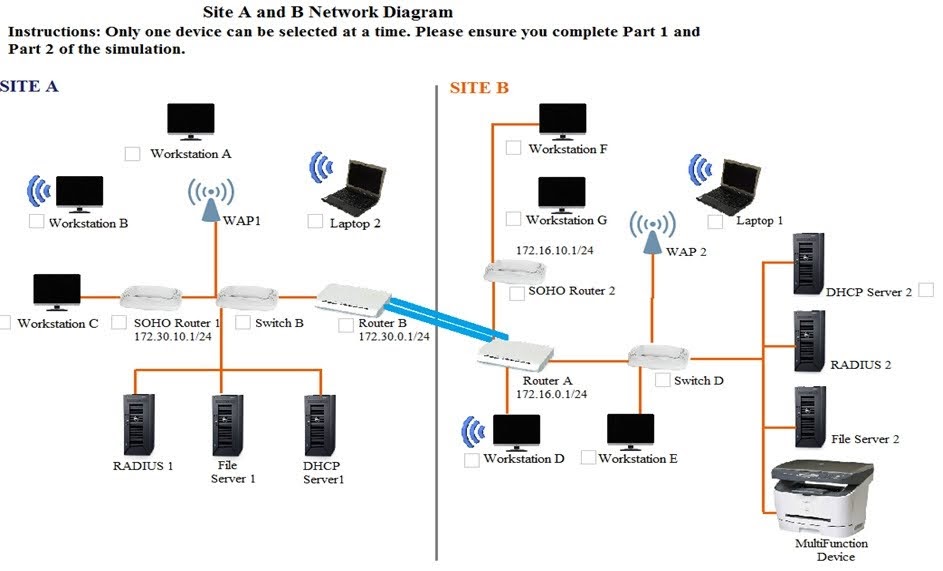 Part 2
Identify the reason as to why some users are unable to access the network.

A. Workstation(s) are plugged into switch ports configured with half duplex.
B. The site-to-site router was configured with the incorrect ACL.
C. DHCP server scope is full and is not providing IP addresses.
D. WAN and LAN ports are reversed on the router.
E. STP has disabled some of the ports on the switch.
F. The NIC driver is not installed.
G. A wireless client is unable to associate to the AP.