The new Fifth-Generation (5G) standard is a unified mobile communication framework for our connected, mobile society; it supports high data-speed applications as well as mission-critical communications with ultra-reliable and low-latency requirements, and it connects billions of devices that can communicate with each other autonomously. This is the vision the International Telecommunication Union Radiocommunication Sector (ITU-R) laid out in Recommendation M.2083, issued September 2015. Since then, standard-setting organizations have been racing to identify and develop the technology components necessary not only to support urgent short-term market needs, but also to meet the long-term objectives of 5G. 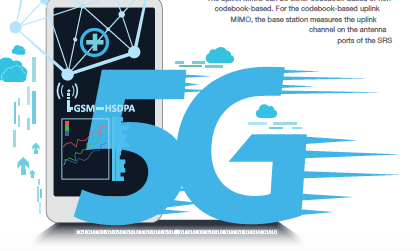 In late 2015, the 3rd Generation Partnership Project (3GPP™) embarked on a mission to define a new Radio Access Network standard—which came to be known as 5G New Radio (NR)—to meet ITU-R requirements. The standardization effort involved channel modeling of spectrum up to 100 gigahertz (GHz), with its vast potential for larger bandwidth allocation, higher throughput, and lower latencies. It also involved studying the scenarios and requirements for next-generation radio access technologies and the corresponding technology components. 3GPP follows a phased approach to standardization, with each phase referred to as a release. The first phase of 5G NR, which supports enhanced mobile broadband and basic ultra-reliable low-latency communications (URLLC) in spectrum up to 52.6GHz, is known as Release 15. The first version of the Release 15 specification became available in December 2017.

This article describes the spectra available in 5G NR and the physical layer enabling technologies developed for 5G NR.

Given the insatiable consumer demand for mobile data and higher throughput rates coupled with the vast amount of spectrum available in the 3 to 100GHz spectrum region, it seemed natural for regulators and standard organizations to consider opening and using spectrum in centimeter wave (cmWave) and millimeter wave (mmWave) regions for mobile communication, as well as to consider developing a framework for spectrum sharing with incumbent technologies.

Moving to mmWaves poses challenges in terms of the characteristics of the radio channel and the fact that small-wavelength waves experience a higher rate of attenuation, e.g., due to atmospheric conditions. However, by exploiting shorter wavelengths with smaller antenna array elements that can be packed together more tightly, it’s feasible to implement antenna arrays with tens or even hundreds of antenna elements in the mmWave band. This approach creates antenna systems with high antenna gains and narrow beams that not only compensate for the higher losses experienced by mmWaves but may reduce interference through their narrow beams.

Table 2 provides two examples for FR1 and FR2 and shows how the preceding techniques increase the throughput.

Table 2: Throughput Increase in NR for FR1 and FR2

5G NR is an orthogonal frequency-division multiplexing (OFDM)–based air interface, where the channels and signals in transmission are allocated to individual subcarriers that make up the composite radio signal. OFDM access is the multiple-access scheme that NR has adopted. For downlink and uplink transmissions, without multiuser multiple input, multiple output (MIMO), different users are allocated to different subcarriers.

The waveform of the transmitted signal in NR uses cyclic prefix (CP)-OFDM for downlink and uplink transmissions. In addition, a discrete Fourier transform-spread OFDM (DFT-S-OFDM) waveform is used in the uplink because of the DFT-S-OFDM waveform’s low peak-to-average power ratio (PAPR) for user equipment (UE) in power-limited regions. DFT-S-OFDM is used only with single-layer uplink transmissions. In the case of DFT-S-OFDM, a signal goes through a DFT precoder before reaching the subcarriers allocated for the transmission. After conversion back to the time domain, a CP appends to the OFDM symbol.

5G NR introduced new channel coding schemes for data and control channels with a payload of 12 or more bits:

5G NR uses massive MIMO, the latest extension of the MIMO techniques, to establish a larger set of antenna arrays with a larger number of elements, thus increasing the efficiency of the 5G network infrastructure. The purpose of massive MIMO is to enhance wireless capacity by improving spectral efficiency through higher order spatial multiplexing and to enhance coverage using beamforming. 5G NR developed a flexible and scalable framework for massive MIMO, which supports:

There are two mechanisms to enhance spatial multiplexing, which 5G NR employs to optimize its MIMO framework:

In downlink MIMO, for single-user MIMO (SU-MIMO), the framework supports eight layers per UE, with up to four layers per code word. For multiuser MIMO (MU-MIMO), up to 12 orthogonal demodulation reference signal (DM-RS) ports exist across all UEs.

Beam management defines a set of procedures that enable transmission and reception of beams in a certain direction within a cell, with narrower angular coverage than cell-wide transmission and reception. One key distinguishing feature of NR is its ability to support beam-based operations. Channels and signals that the base station and UE transmit and receive are beamformed to focus the transmitted energy in a certain direction and thus improve antenna gain. This capability is extremely beneficial for mmWaves, which suffer high propagation losses. It’s also a useful capability for sub-6GHz transmissions.

Release 15 is just the first step toward realizing the 5G vision. 3GPP is working at full speed toward completion of the second phase of 5G NR, known as Release 16. The organization is targeting the completion of Release 16 in two stages:

3GPP introduced a new series of specifications for NR—the 38 series. Each 3GPP Radio Access Network (RAN) Working Group (WG) handles a different set of these specifications. Release 15 specifications have a version number V(15.x.y), where a larger x and y value indicate a more recent specification. The full list of the 3GPP specifications can be found on the 3GPP website:

For RAN WG1, which deals with Radio Layer 1, the full list of specifications

For RAN WG2, which deals with Radio Layers 2 and 3, the full list of specifications

For RAN WG3, which deals with radio network architecture and interfaces, the full list of specifications

For RAN WG4, which deals with radio performance aspects, the full list of specifications

By Emad Farag for Mouser Electronics
Dr. Emad Farag is a senior 5G physical layer standards engineer at Nokia®. He has worked on the physical layer architecture, algorithms, and software of wireless base station modems. Dr. Farag is a subject matter expert in the 5G New Radio (NR) standard, developing techniques to build the 5G standards.