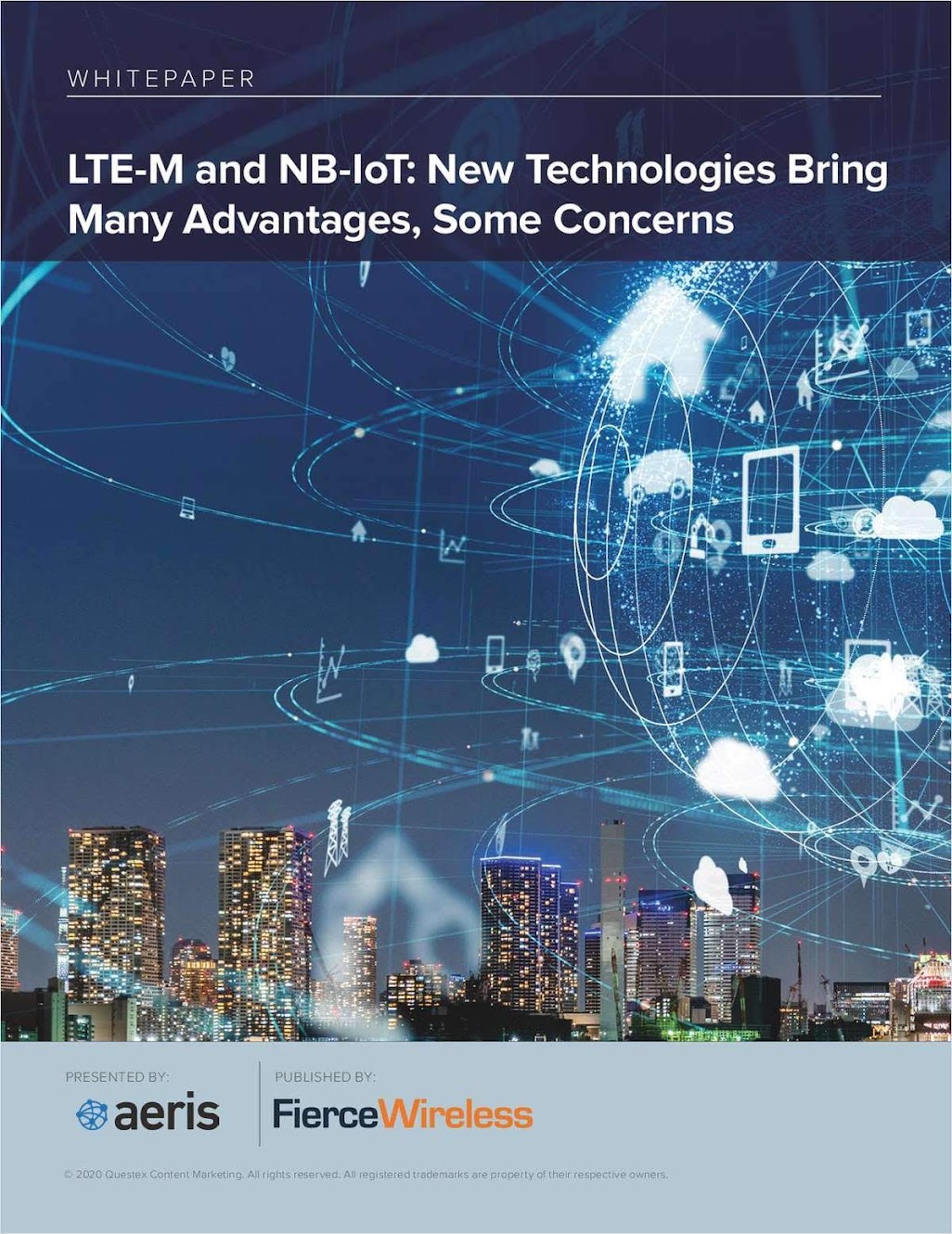 This article will help define the advantages of LTE-M over competing strategies, detail specific network nuances, talk to operational efficiencies, define reliable coverage, explain the necessity of security, and compare costs—all of which must be taken into consideration before initiating an IoT deployment. Finally, we will introduce the Aeris Fusion IoT Network, which was created for the sole purpose of connectivity management in the IoT universe.

Finally, we will introduce the Aeris Fusion IoT Network, which was created for the sole purpose of connectivity management in the IoT universe.

NB-IoT is the newest entry to the IoT scene. With its standards-based LPWA IoT technology, NB-IoT has a global reach with better bidirectional data than any of its unlicensed counterparts. And, unlike LTE-M, NB-IoT is based on Direct Sequence Spread Spectrum modulation, which “widens” the signal to reduce interference. It might also make it a bit harder to go national since it can’t yet hook into the LTE network without infrastructure changes.

LTE-M is a bidirectional, standards-based protocol within the same spectrum as LTE. It provides carrier-grade security, long battery life, low data needs, and low-cost modules. One of the strengths of LTE-M is that it does not need a new infrastructure, as it can piggyback on existing LTE networks. As such, a carrier can update the software on its network, get LTE-M functional, and not spend any additional funds on infrastructure or support services.

LTE-M was specifically developed for use in machine-to-machine and IoT applications, while NB-IoT is a low-power wide-area network technology developed to connect devices and provide cellular services in a wide radius. NB-IoT focuses on providing indoor coverage at low cost with long battery life and high connection density. It uses a limited bandwidth spectrum and cannot be used with existing LTE infrastructures.

Extended Battery Life: This was a key design factor in the development of LTE-M and NB-IoT, and there are many ways these protocols achieve battery lifetimes of 10+ years and minimize maintenance and upkeep costs in the process.

First, NB-IoT maximizes the time the device spends in sleep mode. Known as Power Saving Mode, this feature can be used in conjunction with release assistance rules that allow the device to disconnect from the network after sending a message rather than having to wait for a connection timeout due to system inactivity.

Second, extended discontinuous reception, or eDRX, and sleep paging cycles are two LTE-M parameters that can be customized to reduce how frequently an IoT device needs to connect to the network, send or receive messages, and power between sleep mode and a low-power state.

Lower Cost Deployments: LTE-M provides better data rates (higher throughput) and low latency. It can also be used with mobile devices and offers voice services over the network. But it requires more bandwidth and is, therefore, more costly to run. Based on these characteristics, LTE-M is ideally suited for use in applications such as supply chain tracking in mobile devices like drones and patient wearables. LTE-M can also be used with existing LTE networks. It does not need new infrastructure to be set up and can piggyback on existing LTE networks. The savings that accrue from this can be passed directly to the customer. All you need to upgrade to LTE-M from LTE is an over-the-air (OTA) software update.

As for NB-IoT, it was designed for applications that require lower data rates. In such applications, small delays generally are fine, so NB-IoT works great for devices that send infrequent updates from a static location, like smart meters. However, though cheaper to use, the upfront cost of an NB-IoT deployment is higher than that of an LTE-M deployment because NB-IoT requires new infrastructure to be set up before it can be used.

Remote OTA Updates: Connectivity-Aware OTA APIs: Over-the-air updates can be deployed to thousands of IoT devices at once rather than requiring each device in the field to be manually modified. OTA updates eliminate the need to send technicians into the field, save owners time and money, and make IoT deployments vastly more scalable. The ability to make changes to many devices remotely is essential, especially for operators of large-scale IoT deployments where updating devices manually would be a nearly impossible task. LTE-M support for OTA updates leads to:

Voice and Mobility: NB-IoT, in its current form, does not support seamless mobility. It does not support handover or handoff either, which is the process of transferring an ongoing call or data-transfer session from one channel to another. As such, NB-IoT cannot be used for mobile devices, applications that require mobility, or voice transmission, whereas LTE can, using Voice over LTE, or VoLTE.

Coverage: The global telecom industry is highly fragmented, and service provision agreements often need to be made on a country-to-country basis, with lock-ins often required with local monopolies. This makes billing a unique challenge, and telecom players are often restricted to the coverage areas, availability, and uptime of the local operator. Connecting IoT devices using NB-IoT in such a setup—especially if embedded SIMs are needed—can be prohibitively complicated. With LTE, however, global SIMs can be used, as many countries deal with multiple LTE operators. These factors will affect the ultimate direction that telecom decision-makers choose to take.

Security is no longer a secondary requirement for IoT; industry regulations are expanding, and devices will always be vulnerable. Solutions are needed at the network level.

According to a recent study, almost 70% of organizations have more IoT devices connected to their networks than computer terminals. The vast majority (84%) of security professionals also believe that IoT devices are more vulnerable than computers, and almost six out of seven enterprise security managers say that they do not have the needed visibility of their IoT devices to adequately secure them.

Toward addressing these issues, the California Legislature passed Senate Bill 327 that requires manufacturers of devices that connect to the internet to equip them with security features that can prevent unauthorized access, modification, or the disclosure of information. The bill also outlines specifics with regards to passwords, authorizations, and information access in a first step toward securing IoT devices that have long posed a “weakest link” security hazard for companies across the globe.

With the Fusion IoT Network, devices on the network are locked down so that data can pass only to desired endpoints, and there is no need for additional infrastructure or monitoring.

All cellular operators have networks that use dedicated spectrum bands governed by the terms of the licenses of local regulatory bodies. Restricting a cellular provider’s operations to a licensed spectrum keeps interference from other radio technologies to a minimum. Furthermore, unauthorized use of a given spectrum may be subject to prosecution, adding a layer of security.

NB-IoT uses a protocol known as User Datagram Protocol, or UDP. Because its consumption of power is low, UDP is ideally suited for use in NB-IoT applications. When UDP data packets travel over the internet, however, all of the data in the packet is visible to third parties. For that reason, LTE-M provides better security than NB-IoT—especially in the areas of authentication and encryption, thanks to the ability of LTE-M to send and receive data more quickly and with lower latency.

Reducing Cost Associated with Initiating and Running an IoT Deployment

Cost has always been a concern for IoT applications at scale. Operating expenses have to be low enough to support the massive growth expected in the coming decades. Sustained battery power may be needed for hard-to-reach devices to increase their operational longevity while lowering maintenance costs. In so many cases, the power requirements may be low, but the capacity has to be maintained to support many devices per square mile in dense urban areas.

Aeris owns and operates its core network, which means Aeris can diagnose and fix issues directly. We’re working around the clock to monitor the network and find issues before you do.

Additionally, the Aeris Fusion IoT Network provides the lowest TCO for IoT deployments in the market today. Organizations can achieve a 60% reduction in connectivity costs, a 50% reduction in OTA update costs, and a 30% faster resolution of any issues that might arise.

Looking into the Future

It is worth mentioning that NB-IoT first debuted in European markets, while LTE-M was rolled out in North America. The location of the systems you want to connect to may, therefore, determine which of the two protocols you choose. Business leaders need to keep such macro considerations in mind before locking in on any given cellular technology option.

LTE-M meets today’s standard of security and power conservation and can be deployed in multiple sectors and verticals. Since NB-IoT cannot run on existing LTE networks, it comes with higher upfront costs and does not support voice applications. It also has limits on transferable data, even if it provides a wider range of cellular coverage to more devices in a given radius while using very low amounts of power.

LTE-M has the added advantage of voice transmission, something that will likely become more and more of a requirement as IoT devices and applications continue to evolve. In the past, we have seen that applications and services tend to become more and more data- and feature-heavy as time progresses, not just in terms of business or consumer products and applications, but also in the IoT space as well. Aeris, with more than a decade in the IoT sphere, is especially well-positioned to assist companies of all sizes on their journey from unconnected products to connected services.