Live field testing 5G networks ensure that beams are transmitting accurately to fulfil performance metrics such as throughput per cell, throughput per device, and Quality of Experience (QoE). Learn about the key challenges that mobile network operators face in this article. Most 5G NR deployments are in the 3.5 GHz and 28 to 29 GHz frequency ranges. Both frequency ranges are new to the cellular network and require changes in radio access techniques and network architecture. Achieving higher network capacity and higher data throughputs in these new frequency bands requires massive multiple-input / multiple-output (MIMO) technology with beamforming. However, using these technologies changes the radio access from cell coverage to beam coverage, a significant difference compared to 4G radio access networks.

5G NR also introduces a flexible air interface to support the numerous types of services expected with 5G. The backhaul infrastructure must be enough flexible to handle the different types of devices and traffic loads. Many operators are moving to software-defined networking and network functions virtualization. Distributed cloud, network slicing, and self-optimizing networks are critical enabling technologies to help virtualize the network architecture and management plane to create enhanced communication capabilities. However, these technologies require new tests to optimize QoE for different 5G applications.

As 5G radio access moves from cell coverage to beam coverage, drive test needs to evolve to validate different types of services expected with 5G. These are some key challenges:

With the use of MIMO and beamforming, there is no cell-level reference channel from which to measure the coverage of the cell. Instead, each cell has one or more synchronization signal block (SSB) beams, as shown in Figure 1. The maximum number of SSB beams per cell is between 4 – 64 depending on the frequency range. SSB beams are static or semi-static which always pointing in the same direction by forming a grid of beams covering the whole cell area. The user equipment (UE) searches for and measures the beams to maintain a set of candidate beams. The candidate beams may contain beams from multiple cells. The key metrics measured are reference signal received power (SS-RSRP), reference signal received quality (SS-RSRQ), and signal-to-interference-plus-noise ratio (SS-SINR) for each beam. Infield measurements, both scanning receivers and test user equipments can collect mentioned metrics. 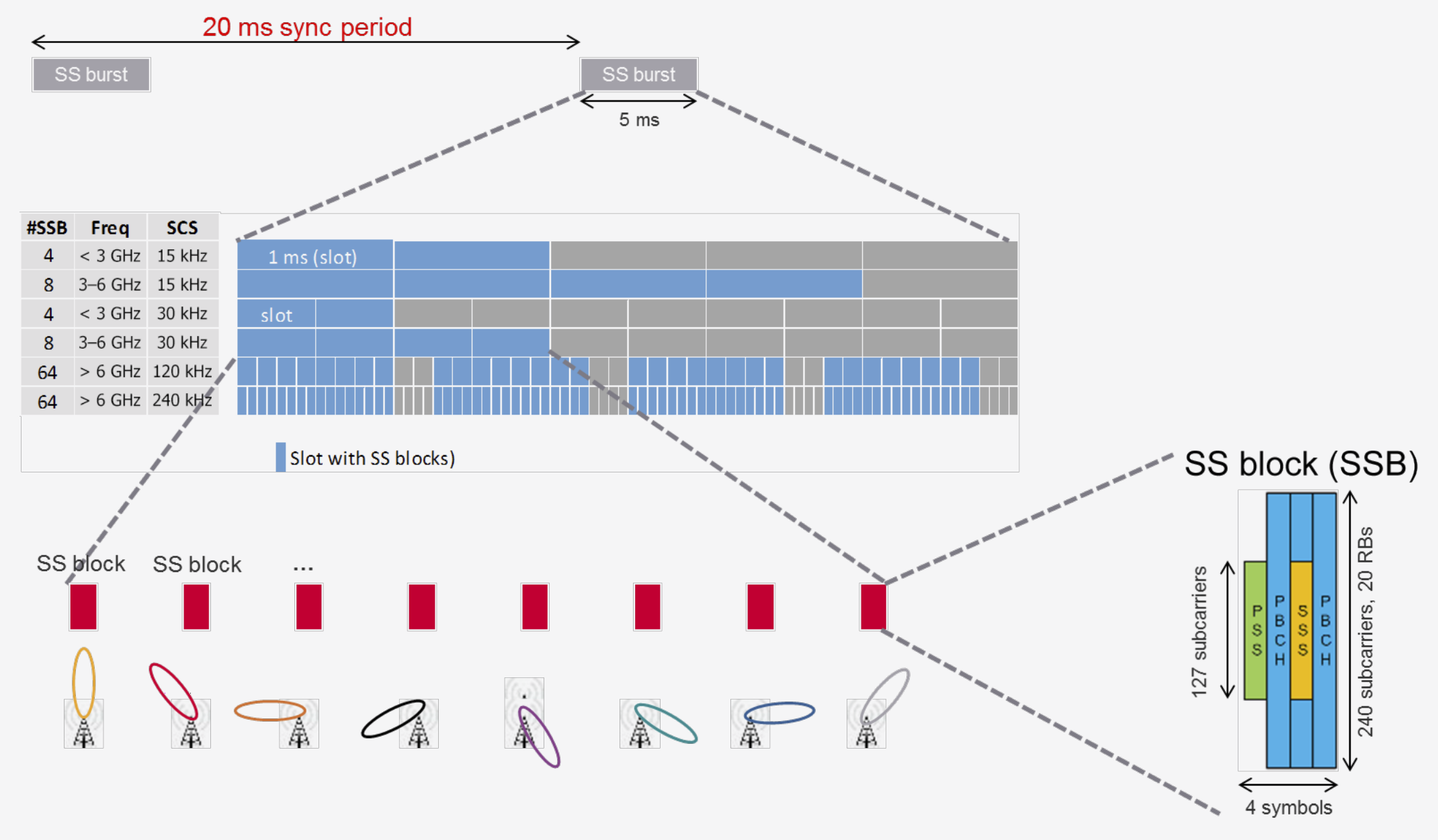 Figure 1. Slot structure of SSBs mapped to a grid of static or semi-static SSB beams

Different SSB beams of a cell transmit at different times to avoid intracell interference among the SSB beams. Therefore, scanning receivers can detect very weak SSB beams, even in the presence of a dominant from the same cell. In general, the number of reference signals in the air will increase. As an example, imagine a place of feeble coverage in an LTE network, where a scanner or a test UE detects reference signals from six cells. If it were a 5G NR network, the device could see, for example, six beams of six cells each, for a total of 36 reference signals.

The spatial distribution of UEs has a significant impact. Ideally, the UEs should be scattered across the cell area. It becomes impossible to isolate the users to different non-overlapping beams if all users are in the same location. The minimum acceptable horizontal and vertical spatial separation between UEs may differ depending on the number of physical antenna elements in the base station antenna panel in the horizontal and vertical dimensions. The signal-to-noise ratio of each user, as well as the multipath propagation profile, impacts the achievable performance. Every one ms (slot), the base station makes the scheduling decisions and determines whether to use MU-MIMO.

Testing the capacity gain of massive MIMO requires multiple test UEs distributed in the cell area, each performing simultaneous active bulk data transfer against a test server. In a test setup, it is crucial to ensure that core network and back-end server have enough bandwidth so that radio interface is the only bandwidth bottleneck present during the test. Using multithreaded data downloads in the tests can remove any adverse effects of Transmission Control Protocol flow control. One test scenario involves arranging UEs close to each other to test the threshold for spatial separation, where massive MIMO can still provide gain. Other scenarios include vertical distribution of UEs (such as one on each floor of a high-rise building), horizontal distribution of UEs, line-of-sight UEs versus non-line-of sight UEs with rich multipath propagation environment, moving UEs, cell edge versus cell centre, or any combination of the above. 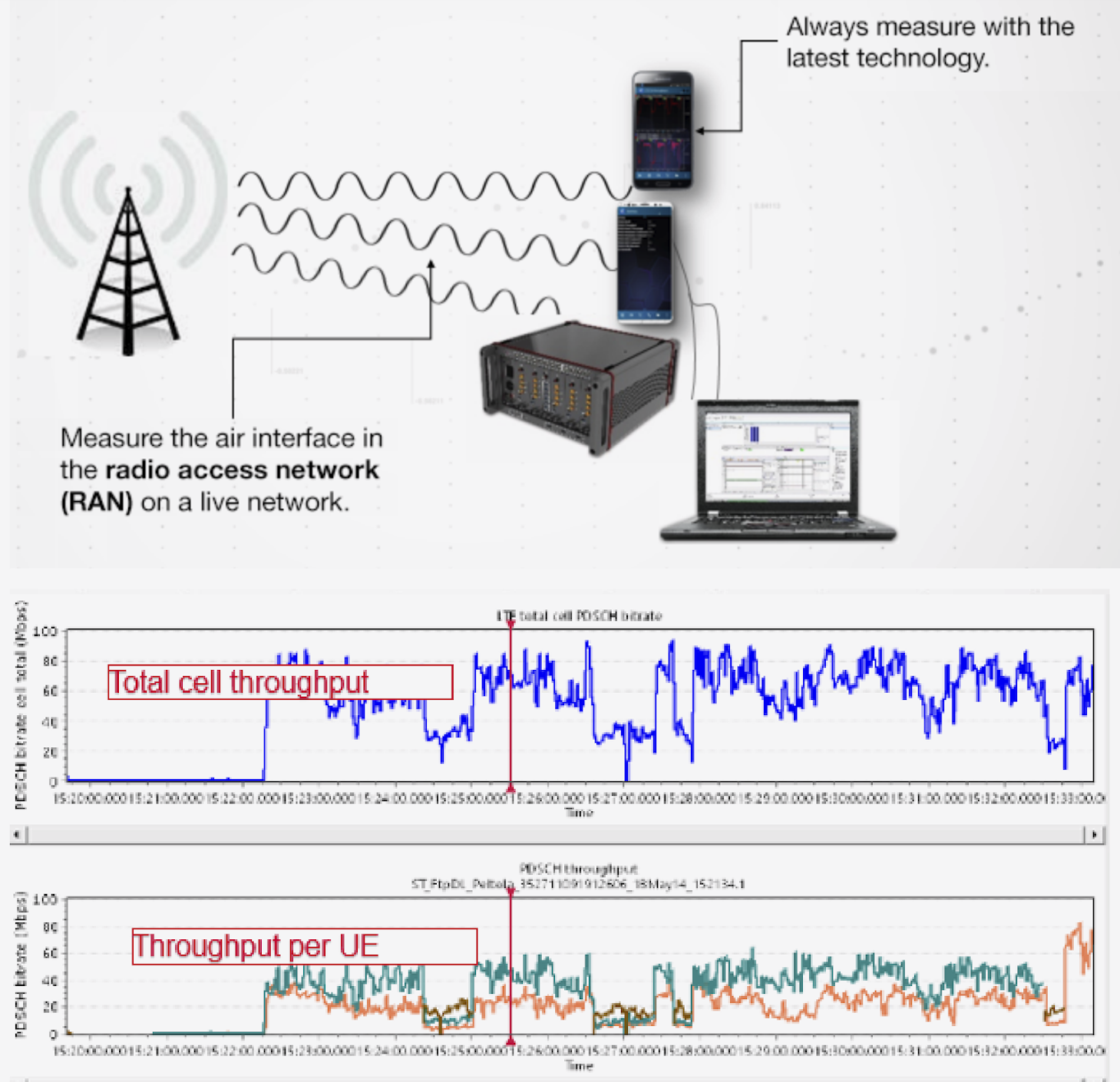 5G NR drive testing can use both scanners and test UEs. In legacy systems, scanners were best suited for coverage measurements because they could measure all cells from all networks in one instance. Scanners can test for in-band and out-of-band interference in the network. A UE is always associated with one operator. Constrained by the neighbour list definitions in the network, it does not necessarily measure all technologies or even all carriers. The same reasoning is valid in 5G NR. Scanners can measure the SSB (PSS, SSS, and physical layer broadcast channel, or PBCH, block) beams, the basic coverage measurement of the 5G NR network.

Another consideration is that scanner antennas have different characteristics than mobile UE antennas. This was a consideration in LTE, along with the MIMO antennas, and is even more critical in 5G NR. Early 5G NR UEs implement coarse beamforming at the device end, making antenna gain and MIMO performance even more dependent on the devices.

Network slicing is a new concept in 5G NR for both core network and radio access networks (RANs). Network slicing allows the creation of multiple virtual networks on top of common shared physical infrastructure. A single physical network can be sliced into multiple virtual networks that can support different RANs, or different service types running across a single RAN. Network slicing replaces the quality of service (QoS) profiles used in LTE and universal mobile telecommunications. One big difference from the legacy technology is that the network automatically detects the type of application. Consequently, the network can apply separate QoS settings for different applications. For example, the network could detect a WhatsApp call as a voice-over-IP (VoIP) service and relay the traffic on a network slice that is optimized for low-latency, guaranteed low-bitrate traffic.

This means that a 5G NR network with network slicing operates differently depending on the application in use. Consequently, making bulk data transfers using File Transfer Protocol (FTP) or Speedtest.net does not give an accurate picture of the true QoE. Active QoE testing using real applications is thus increasingly important in 5G NR. Operators need to do network optimization or network benchmarking with live applications to find out where issues might occur.

The only way to assess end-to-end QoE in 5G NR accurately is by using active tests conducted at the device end, as shown in Figure 4. The three crucial, measurable KPIs related to the QoE of any type of transaction (retainability, accessibility, and time to content) are visible and measurable only at the device end. Active tests using real over-the-top applications are the best way to measure them.

It is essential to test the latency and peak throughput of the connection. Conducting root-cause analysis pinpoints the location of the connection bottleneck: device end, RAN, core, or back-end server. This type of analysis can also help identify points of failure for dropped calls or handover issues, for example. New test schemes should provide QoS prediction on a mean opinion score scale for different application types, including VoIP, streaming video, live TV, and web browsing. The QoS prediction allows for a quick check of 5G NR end-to-end performance with different types of applications without the need to check the QoE by the application.

Field testing (drive testing) at the application layer can translate the user experience into measurable KPIs and speed up the field verification of 5G NR use cases.

NR QoE testing is also more complicated because of changes in the network architecture. Networks will have the ability to detect different traffic types and relay data streams from different applications to disparate QoS settings (slices). Therefore, traditional testing like Speedtest.net or FTP bulk data transfer does not reflect the true service quality as seen by an application. Conducting QoE field testing at the application layer can address the 5G NR QoE measurement challenge and translate the user experience into measurable KPIs.