Which of the following are port roles in the Rapid Spanning Tree Protocol (RSTP)? (Choose three.)

RSTP has the following similarities to STP:

Listening is a port state, not a port role. Listening is the STP transitional state while a port is preparing to enter a root or designated role.

The routing port does not exist in the RSTP topology.

Discarding is an RSTP port state, not a port role.

Which two security features can be configured to prevent unauthorized access into the network through a networking device? (Choose two.)

Authentication security can be used to prevent unauthorized access to the network. When a user attempts to access a service or host within the network, they must enter credentials such as their user name and password. If the credentials are correct, then access is provided; otherwise, the user is not allowed to access the service.

Which of the following IPV6 commands is used to define a static host name-to-address mapping in the host name cache?

The ipv6 unicast-routing command is used to enable IPv6 forwarding on a router.

There is no ipv6 local command. There is an ipv6 local pool command that can be used to define a prefix pool when using DHCPv6.

The option stating that an AUI connector is used with serial ports is incorrect because AUI is a connector used with Ethernet ports.

The option stating that an RJ-45 connector is used with serial ports is incorrect because RJ-45 and RJ-48 connectors are used with ISDN BRI connections.

Which of the following commands is used to verify the link-local, global unicast, and multicast addresses of an IPv6 router?

Here is the partial output of the show ipv6 interface command on an IPv6-enabled router named rtrA:

The show ipv6 neighbors command displays the link-local /global unicast addresses of the neighbors, including other information such as state and the next-hop interface.

The show ipv6 route command is used to view the IPv6 routing table on the router. This command displays the prefixes, administrative distance, metric, and next-hop addresses for various IPv6 networks.

Which type of Category 5 unshielded twisted-pair (UTP) cable is used to work as a trunk between two
switches?

In general, the rule to follow when choosing between a straight-through and a crossover cable is:

The one exception to this rule is when connecting a computer NIC to a router, in which case a crossover cable is used. Be aware, however, that many devices, including network cards in computers, now have the ability to sense automatically when they are connected to a like device and adapt to the connection, making crossover cables unnecessary in those situations.

You should not choose an RJ-41 crossover cable. RJ-41 is a single-line universal data jack normally associated with fixed-loss loop (FLL) or programmed (P) modems. It is not used between switches.

You should not choose an RJ-11 straight-through cable type. RJ-11 UTP cables have four pins and are used to connect voice instruments. RJ-11 UTP cables are not intended for connecting computers and transferring data. They are commonly used for telephones and modems.

Note: Cisco switches have an auto-mdix feature that notices when the wrong cabling pinouts are used, and readjusts the switch’s logic so that the cable will work.

When routing does not seem to be working correctly, one of the first things to check is whether OSPF is operating on the proper interfaces. OSPF is enabled by network statements. To verify the network statements that were entered, you should execute the show run command and examine the output. If the network statement is configured so that the interface on the router is not in that network, OSPF will not operate on that interface. For example, suppose that Router A has an interface of 192.168.5.1/30 and the show run command produces the following output:

Which commands would you use to determine the IP address and hostname of a directly connected switch from which you received VLAN information? (Choose two. Each correct answer is part of the solution.) 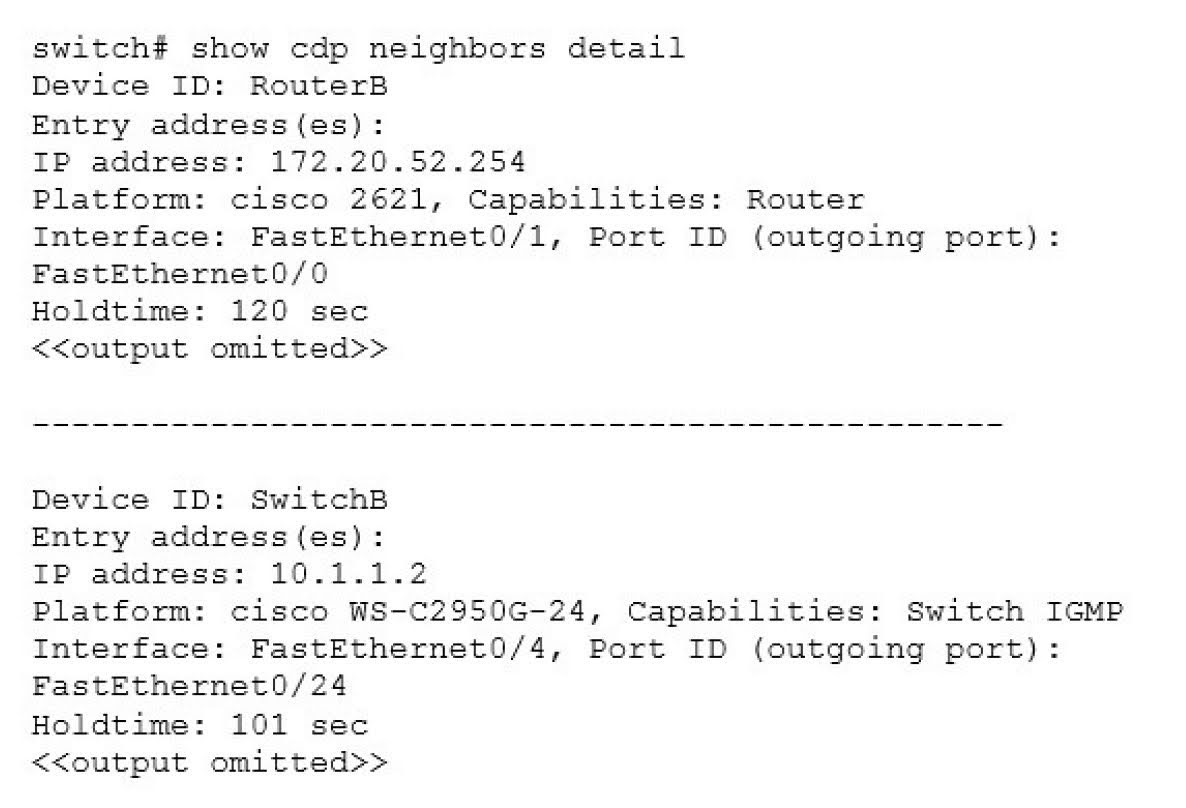 The show cdp neighbors detail command provides detailed information about directly connected Cisco devices. The detail option is required to provide the IP address of the neighboring devices, and indicates here that IP address 10.1.1.2 is assigned to Device ID: SwitchB, which is the hostname for this device. SwitchB is the switch from which you received VLANs.

Although not offered as an option, the show cdp entry* command will also display all directly connected devices and will indicate the hostname and the IP address and platform, but will not indicate from which device VTP information was received. Its output is shown below:

This command displays the same information as the show cdp neighbor detail command. It includes:

The show vtp counters command is incorrect because it does not display information about neighboring devices, nor information regarding from which switch VLANs were received.

The show cdp neighbor command is incorrect because the detail option is required to display the IP addresses of neighboring devices.

The show cdp neighbor status command is incorrect because this is not a valid Cisco IOS command.

What would the next hop IP address be for this packet?

The packet in the scenario has a destination IP address of 10.2.16.10, which matches two entries in the routing table.

Therefore, the 10.2.16.0 /24 entry is selected for routing this packet because it most specifically matches the destination IP address, or has the longest number of matching bits.

It is interesting to note that packets that are destined for the 10.2.32.0 network will be load balanced across both serial 0/0 and serial 0/1 because the cost (2172425) is the same for both paths.

The packet will not be dropped because there is at least one routing table entry that matches the destination IP address of the packet.

To ensure that no packets are dropped, even if there is no matching route in the routing table, a default route could be configured as follows (next hop picked at random for illustration): 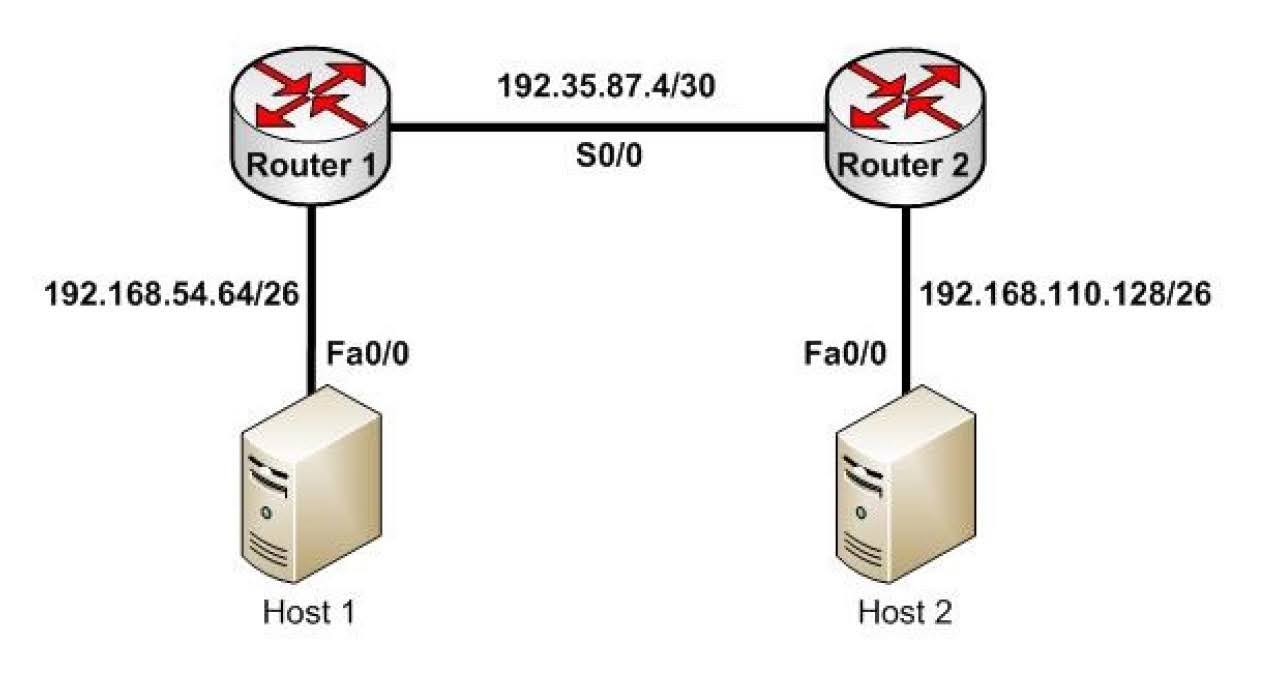