There are a great many ways to available to run multiple shell applications at the same time, from within the same shell instance.

These are typically known as terminal multiplexers — with tmux and GNU Screen being among the most popular. Both of which allow you to divide up the shell screen into a grid pattern, with each application taking up a portion of that grid.

Well, there’s a new kid on the block that does things… a little bit differently. 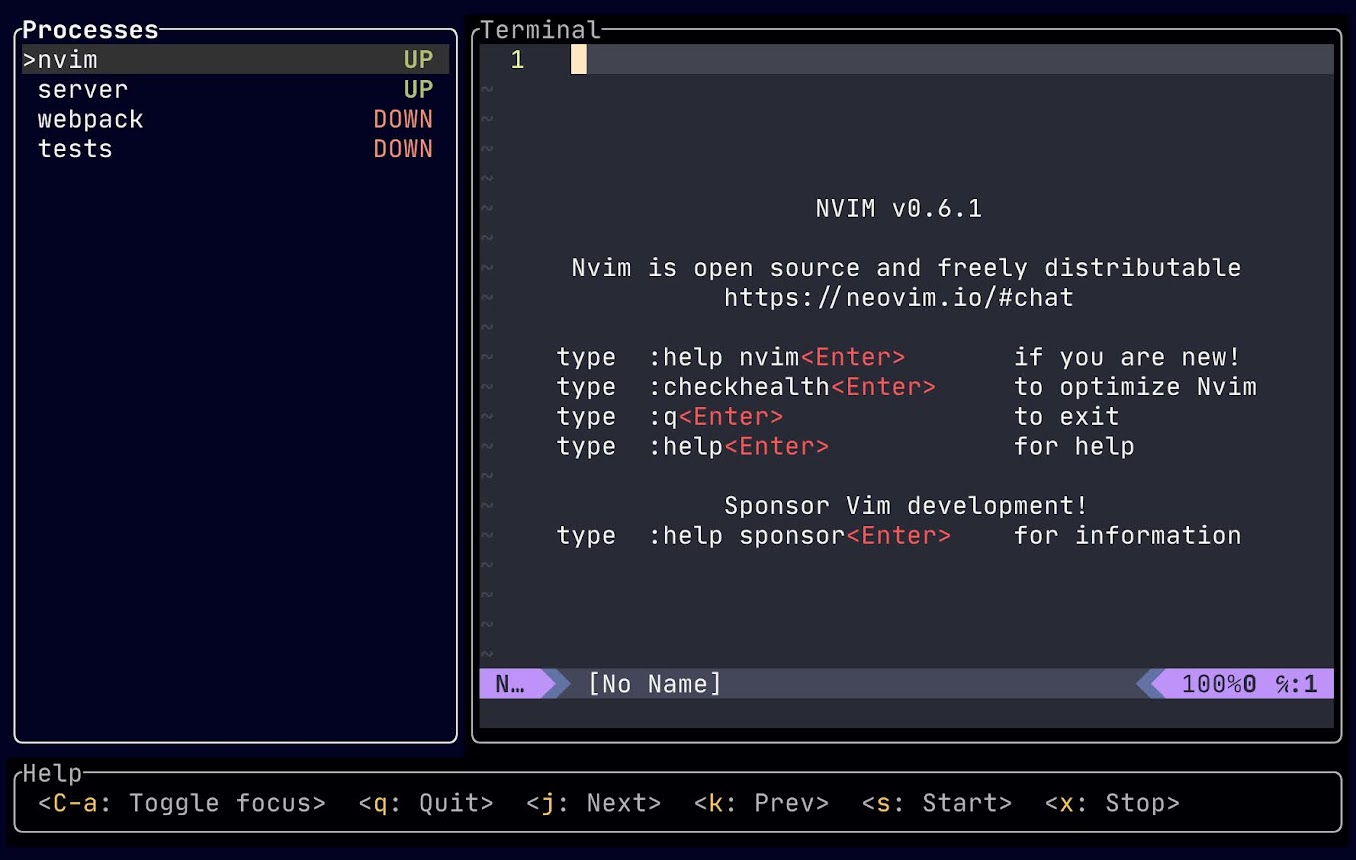 You launch mprocs with a list of applications or shell commands you wish to run (with each as a command line parameter). 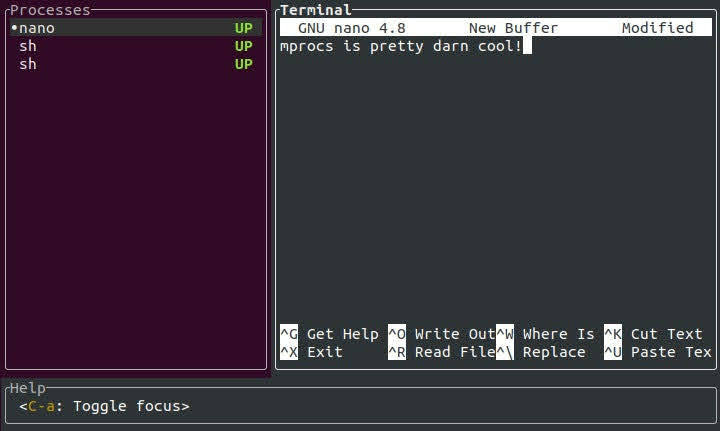 You then type “Control-A” to switch focus between the “Processes” list on the left and the currently running shell process (on the right).

When the “Processes” list has focus, you can then hit a key to control that individually selected process:

Arrow up/down (or J/K) — Move between each process.

S — Start running the process again (if it was stopped).

In this way, the Processes list in mprocs is, essentially a task manager / system monitor / task switcher.

Want one of the processes to be a server or application you are testing — and another to be an IDE, text editor, or compiler process? Start, stop, and re-start them at well. Very handy for making and testing builds or configuration changes.

I’ve been using mprocs all morning and it works astoundingly well. Honestly, I could see this quickly becoming my favorite way to run multiple terminal applications inside a single shell (which is very handy when SSHing into a server). 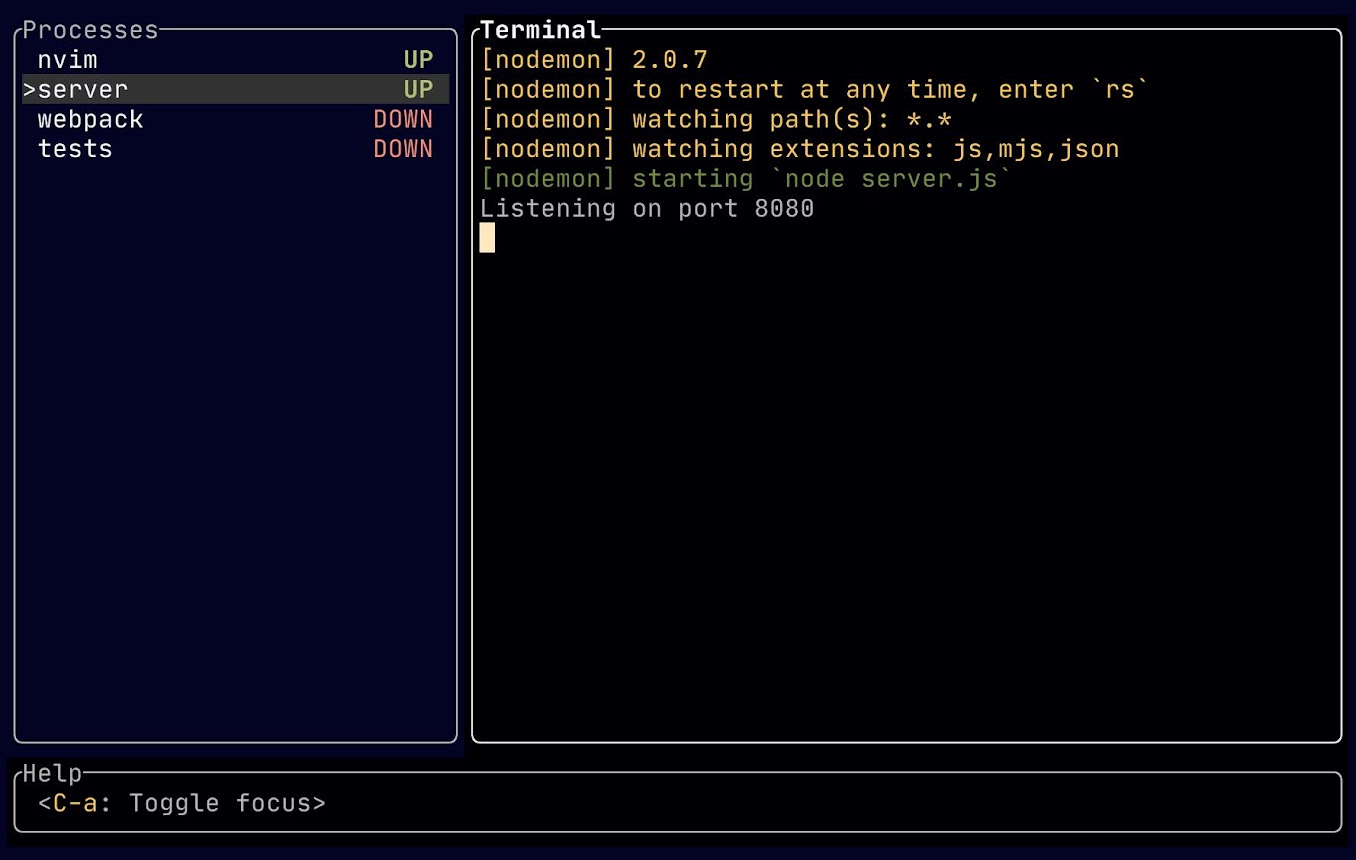 There are only two downsides that I’ve found for mprocs thus far:

That second one is the biggest issue… though there is a (less than ideal) workaround:

Add as many shell sessions (with no processes running) as you think you might want to use. For example: mprocs sh sh sh sh sh

Will start mprocs with 5 shells… from there you can launch any shell application you like (vim, nano, htop, etc.).

All-in-all, I like mprocs quite a lot! Considering it is a new project — and the fact that I only have two issues (ones which seem rather straight forward to resolve) to complain about — I am darned impressed!

I highly recommend grabbing a release from the GitHub page and taking it for a spin.