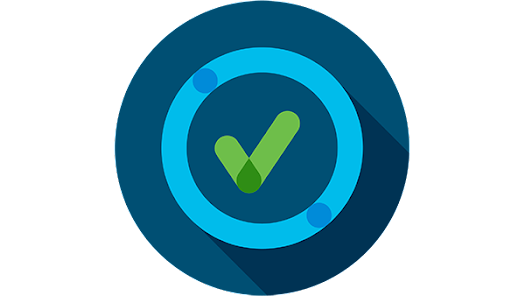 Communications layer and distributed ledger
A set of services that enable blockchain nodes to communicate with each other and maintain consensus with respect to the ledger state.

Smart contracts
A pluggable smart contract engine, executed in a secure environment that supports familiar developer languages such as JavaScript, GoLang, and Python.

Orchestration
An orchestration layer that ties all the other service levels together as part of a “service mesh.” Enterprises can use their tool of choice, such as Kubernetes, Rancher, and Docker swarm. The orchestration layer facilitates tasks such as adding and removing nodes, made simple
via the administrator portal.

When evaluating any new enterprise blockchain technology, it is important to consider the ease of deploying and managing the network, developing applications with best-in-class tools, and integration with existing enterprise systems. Cisco blockchain framework includes interfaces that expose the necessary functionality to perform these objectives, enhancing overall ease of use. 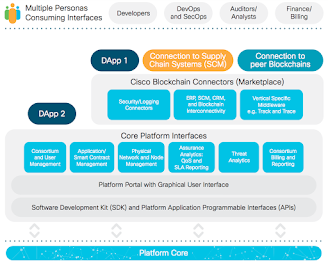 Platform interface
The native platform interface is composed of a software developer kit (SDK) with flexible APIs, as well as an administrator portal that exposes important SDK functionality via an intuitive graphical user interface.

Middleware and connectors
To further simplify ease of use and accelerate enterprise adoption, the blockchain platform architecture defines a middleware and connector interface that integrates with existing centralized enterprise systems as well as other blockchain networks. This is achieved via a library of native and third-party application connectors and middleware, made available via a developer marketplace.

Cisco hardware-independent blockchain framework defines a set of standards to address infrastructure-level security risks, including reference architectures to deploy on the premises: in an enterprise’s demilitarized zone (DMZ), in the cloud, or via a hybrid deployment. Furthermore, the platform provides flexible support for a choice of infrastructure technologies, including hardware security modules (HSMs) and WAN optimization tools such as software-defined WAN. 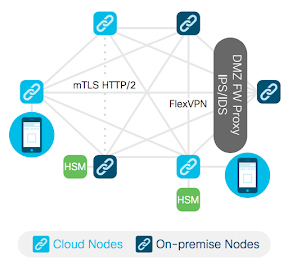 A common misconception is that the distributed nature of blockchains makes them inherently secure. However, without the correct design measures, they can be prone to multiple threats, including:

Cisco blockchain framework is completed with end-to-end security and analytics, spanning the infrastructure layer through to the interface layer. Additional protection is also provided by a blockchain application firewall, or BAF. The BAF is analogous to a web application firewall (WAF), which detects and protects against various attack vectors by inspecting for unusual patterns using analytics. For example, a BAF might detect unusual traffic from an agent that could represent an attempted DDoS attack.

Building an ecosystem for industry solutions

In addition to robust platform standards, organizations are looking to partners to build industry-specific solutions for large-scale adoption. As companies explore enterprise solutions and industry use cases, they will need experienced partners, including:

Cisco is building an ecosystem to support blockchain adoption that brings together service providers, ISVs, and startups, as well as key consulting partners to create end-to-end industry solutions for the enterprise. This comprehensive approach to innovation is one that will future-proof our customers and partners while fully harnessing the possibilities of this radical new technology.

Each blockchain network represents a unique value chain, such as a manufacturing supply chain, a consortium of companies with interconnected IoT devices, or even a smart city. As blockchain networks grow and expand, these discrete networks will increasingly need to interact with one another. This close interaction will require new interoperability standards and protocols, as well as security toolkits to help secure these discrete blockchain bridges. 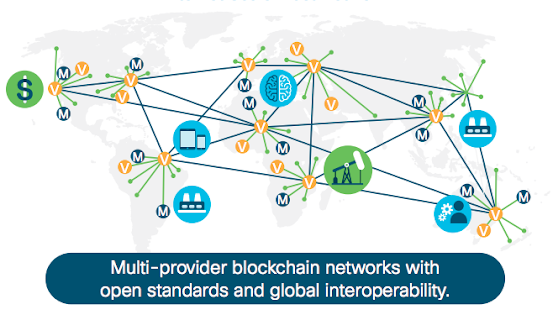 A primary focus of Cisco’s blockchain effort is around creating a common data model for digitized physical assets that can be deployed on any existing blockchain network, including well-known platforms in the Hyperledger project and Enterprise Ethereum.

For example, Cisco envisions the ability for an asset to be digitized on one blockchain network type and transferred to others, while maintaining a cryptographically secure record of ownership or custody. Figure 10 shows how this capability could be used to track the import and export of goods. 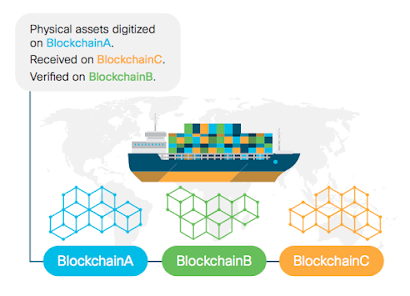 To deliver a true Internet-scale trust network that is interoperable, Cisco is working with a number of industry and ecosystem partners to develop standards and tools for blockchain technology to reach its full potential in the enterprise.

Trusted IoT alliance
Cisco is leading industry adoption efforts through the Trusted IoT Alliance, which is platform independent and focuses specifically on developing an interoperability framework for digitized physical assets and their smart contract libraries that live on blockchain networks. The Alliance is also focused on addressing challenges around scale and performance, through the launch of the first-of-its-kind test net for blockchain, enabling engineers to access a global open-source test environment for the development of blockchain solutions.

Digital Chamber of Commerce
Cisco is an Executive Committee member of the Chamber of Digital Commerce, the world’s leading trade association representing the digital asset and blockchain industry. Cisco and the Chamber are spearheading efforts to promote the acceptance of digital assets and blockchain-based technologies through education, advocacy, and collaboration with policymakers and regulatory agencies.

Blockchain has the potential to change the rules by automating trust, increasing transparency, and simplifying business processes. However, to unleash its full potential, it needs to be based on an established set of standards that meets the complex needs of the enterprise. In addition, today’s organizations are seeking industry specific solutions to transform their business processes and need the ability to build blockchain networks that are interoperable.

Cisco is building a comprehensive foundation for enterprise blockchain technology that brings together our strengths in high-availability distributed systems architecture as well as best-in-class capabilities around security, identity, and cryptography. To accelerate enterprise adoption, we’re also bringing together a world-class ecosystem of partners and alliances to deliver a true Internet-scale trust network.