The transformation opportunities in IoT-enabled enterprises are massive – but to reap the benefits of transformation, you need industry-leading security that reliably protects IoT. 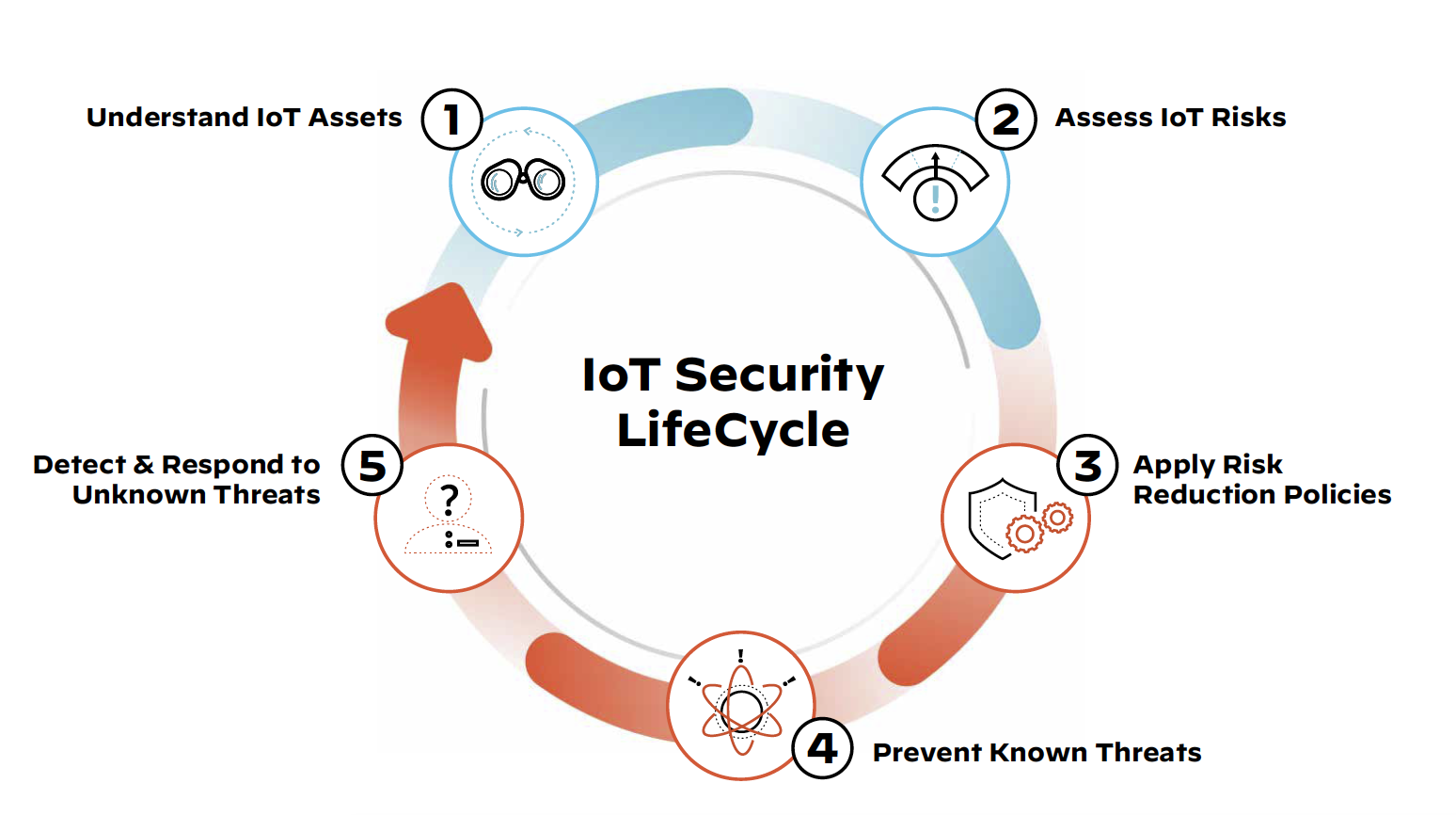 Secure Across the 5 Stages of the IoT Security Lifecycle

To securely enable IoT, it’s crucial to adopt a more holistic approach, using an IoT security solution that protects you across the critical stages of the IoT lifecycle.

Read on this article for implementing best-in-class IoT security and discover how to secure unmanaged devices easily and effectively, wherever you are on your IoT journey.

Companies successfully integrating the internet of things (IoT) into their business models are realizing huge benefits for their processes, employees and customers.

Beyond that, most IoT security solutions fall short of addressing the entirety of IoT challenges.

Today, IoT devices account for more than 30% of all network-connected enterprise endpoints. It’s time for CISOs and security leaders to consider a complete IoT “lifecycle approach” to create an IoT security posture that reliably enables IoT and protects the network from new and unknown threats. The lifecycle approach encompasses the five critical stages of IoT security.

Read on this article to learn about the current state of enterprise IoT adoption, unique challenges to security teams and the five key stages in the lifecycle of a best-in-class IoT security solution.

IoT Adoption Is Growing in the Enterprise

While some of the most striking benefits of IoT revolve around business process efficiency, productivity, and cost reduction, an increasing number of enterprises are also recognizing IoT as an extraordinary source of intelligence into how their products are really changing the lives of their employees and customers.

This is because the true value of enterprise IoT comes from data. Insights derived from IoT-generated data are proving to be invaluable to business decision-makers.

More than 30% of all network-connected endpoints are IoT devices at the average enterprise today. Needless to say, these numbers are projected to keep growing—and exclude mobile devices. A report by Gartner predicts the adoption of IoT endpoints to soar to 5.81 billion this year.

Enterprise segments with the highest use in 2020:

Enterprise segments with the largest growth in 2020:

The transformation opportunity for IoT & OT-enabled business models in the enterprise is massive. But to reap the benefits of transformation, enterprises need leading edge security that reliably enables IoT.

The influx of IoT devices in the enterprise poses a new set of challenges, particularly for security teams.

Enterprise security teams are already tasked with protecting IT endpoints connected to the enterprise network. Under the new normal—with the exciting new concept of IoT at the helm—they also have to contend with challenges arising from the increasing prevalence IoT devices connected to an enterprise’s central network yet generally unmanaged.

Prevailing security mechanisms are not adequate–or effective–when it comes to securing IoT in the enterprise.

A growing number of virtually invisible IoT devices are becoming invariable constituents in enterprise networks. From building and street light sensors, flow monitors, surveillance cameras to IP phones, point-of-sale systems, conference room technology, and so much more, IoT and OT is on the network and in the organization. These devices significantly expand an organization’s attack surface. Prevailing network perimeter defences are poorly equipped to address the security challenges arising out of this inflow.

CISOs must consider a “lifecycle approach” to level up their IoT security strategy.

The concept of a lifecycle approach is critical to securing the IoT and OT devices. An ideal IoT security solution seamlessly integrates all stages of the IoT lifecycle—from the discovery of IoT devices and their associated risks to security actions that enforce protections and defend these devices from known and unknown threats.

The 5 Must-Haves in an IoT Security Solution

To implement the IoT Security lifecycle, look for 5 must-haves in your IoT security solution.

Complete visibility into all IoT devices connected to the enterprise

Before deciding on a security posture, you must have full visibility into your IoT attack surface. Your IoT security lifecycle begins here. To understand your IoT assets, employ device discovery for complete visibility. Your IoT security solution should be able to discover the exact number of devices connected to your network, including the ones you are aware and not aware of—and those forgotten. This discovery helps collect an up-to-date inventory of all IoT assets. Apart from this, the solution should surface essential device attributes to provide full context on each device.

Decide on a solution.

To fulfil the requirements of the IoT risk assessment stage in the IoT security lifecycle, your solution must actively monitor IoT devices at all times. Real-time monitoring, reporting, and alerting are crucial for organizations to manage IoT risks. Traditional endpoint solutions cannot protect IoT assets since they require software agents that IoT devices are not designed to take. Assessing risk in your IoT security lifecycle lets, you take a better approach. Implement a real-time monitoring solution that continuously analyzes the behaviour of all your network-connected IoT devices to contextually segment your network for granular control over the lateral movement of traffic between your IT and IoT devices—and their workloads.

Make sure the solution.

Your IoT security solution must be easy to deploy without the need for any additional infrastructure or investment from your side. Look for a solution that leverages your existing firewall investment for comprehensive and integrated security posturing. Running in conjunction with the capabilities of your firewall, the solution must automatically recommend and natively enforce security policies based on the level of risk and the extent of untrusted behaviour detected in your IoT devices.

Taking into account that trust is nothing but a vulnerability, your IoT solution must directly align with the principle of zero-trust to enforce policies for least-privileged access control. This significantly reduces the pathways for adversaries, whether they are inside or outside your organization, to access your critical IoT assets.

Verify whether the solution

The diverse nature of IoT devices creates a highly distributed environment in your network with numerous points of compromise. Successful outcomes of your security posturing in stage four of the IoT security lifecycle will require actionable insights into the detection and prevention of known threats to your IoT devices for a swift response to threat mitigation. Look for a threat prevention mechanism that uses payload-based signatures to block advanced threats on your IoT devices. This will ensure the most up-to-date security posture and defence against known threats for rapid, real-time responsiveness to anomalous IoT device vulnerabilities, weaknesses across your network and importantly doesn’t overburden security teams with detection alerts that could be stopped—saving time and heartache.

Check to see if the solution.

When it comes to detecting and preventing truly unknown threats, legacy approaches isolate threat data each organization receives and generates, creating silos and reducing the possibility of prevention. To meet the requirements of the last step in the IoT security lifecycle, your IoT security solution should be capable of leveraging a new approach, drawing from a collective threat intelligence engine that delivers real-time malware analysis and protections from zero-day attacks to your IoT devices. Tapping into crowdsourced data from a global community of subscribers not only provides collective immunity but also saves your IT security team valuable time by leveraging IoT identity information, risk scores, vulnerability data, and behavioural analytics to investigate never-heard-before threats unique to your IoT environment right from the outset. This last step will also uncover potential threats missed in earlier stages and leads you into a cyclical process for continual improvement.

Also, make sure the solution.