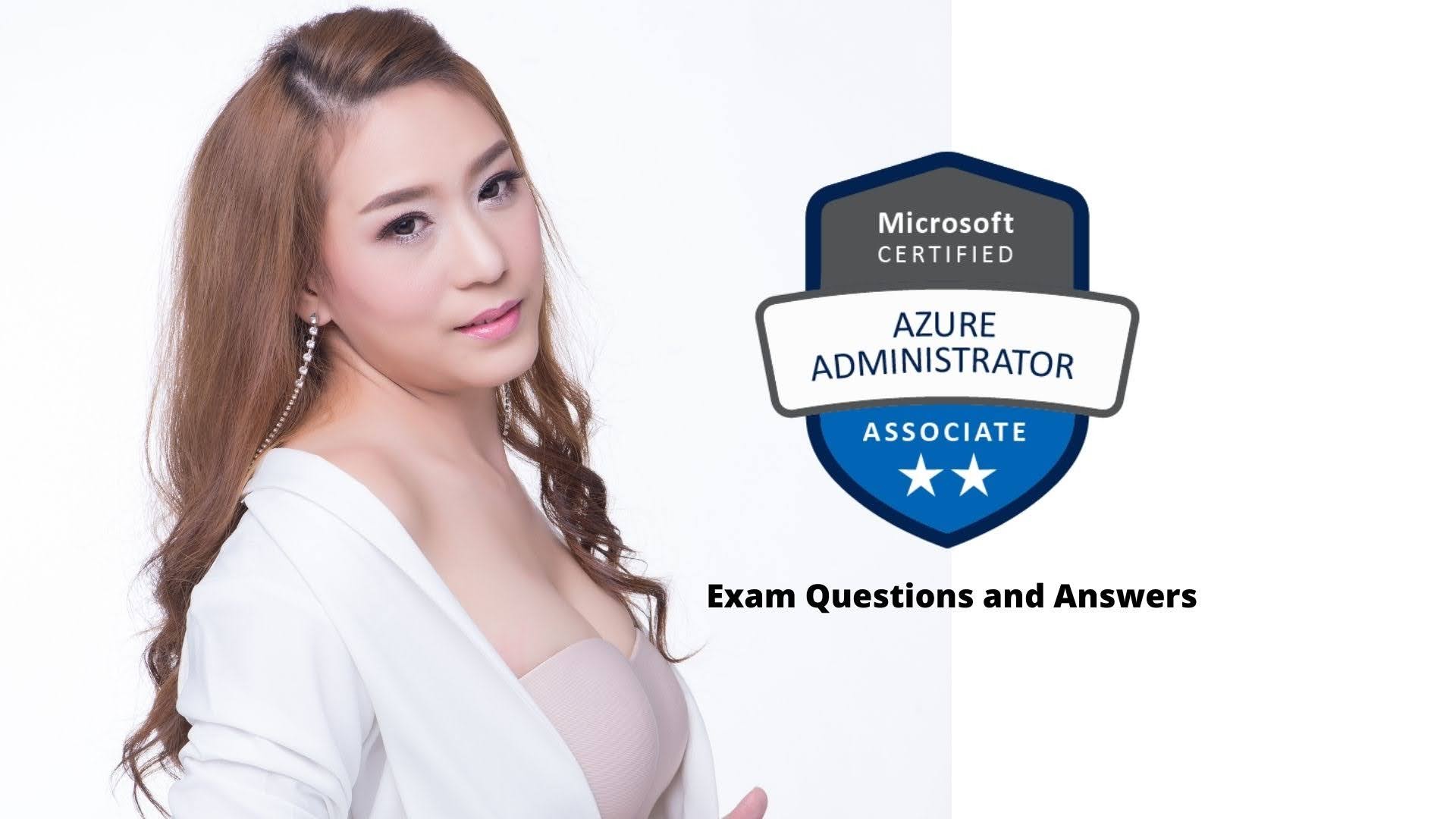 You create the following resources in an Azure subscription:

You create a container image named App1 on your administrative workstation.
You need to deploy App1 to Cluster1.
What should you do first?

You have an Azure subscription that contains the resources shown in the following table.

Correct Answer:
A. Proximity2 only

Answer Explanation:
Resource Group location of VMSS1 is the RG2 location, which is West US.
Only Proximity2, which also in RG2, is location in West US

You have an Azure subscription named Subscription1. Subscription1 contains a resource group named RG1. RG1 contains resources that were deployed by using templates.
You need to view the date and time when the resources were created in RG1.
Solution: From the Subscriptions blade, you select the subscription, and then click Resource providers.
Does this meet the goal?

Litware, Inc. is a consulting company that has a main office in Montreal and two branch offices in Seattle and New York.

The network contains an Active Directory forest named litware.com. All domain controllers are configured as DNS servers and host the litware.com DNS zone.

All the offices connect by using private connections.

Litware has data centers in the Montreal and Seattle offices. Each office has a firewall that can be configured as a VPN device.

All infrastructure servers are virtualized. The virtualization environment contains the servers in the following table.

The Azure subscription contains the resources in the following table.

You discover that VM3 does NOT meet the technical requirements.
You need to verify whether the issue relates to the NSGs.
What should you use?

Answer Explanation:
Scenario: Contoso must meet technical requirements including:
Ensure that VM3 can establish outbound connections over TCP port 8080 to the applications servers in the Montreal office.
IP flow verify checks if a packet is allowed or denied to or from a virtual machine. The information consists of direction, protocol, local IP, remote IP, local port, and remote port. If the packet is denied by a security group, the name of the rule that denied the packet is returned. While any source or destination IP can be chosen, IP flow verify helps administrators quickly diagnose connectivity issues from or to the internet and from or to the on-premises environment.

Answer Explanation:
A client computer that connects to a VNet using Point-to-Site must have a client certificate installed.

You have an Azure subscription named Subscription1. Subscription1 contains a virtual machine named VM1.
You have a computer named Computer1 that runs Windows 10. Computer1 is connected to the Internet.
You add a network interface named vm1173 to VM1 as shown in the exhibit. (Click the Exhibit tab.) 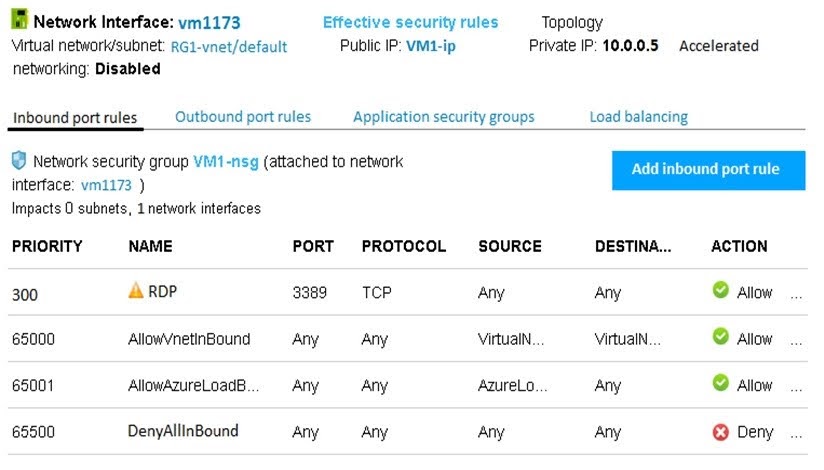 A. Change the priority of the RDP rule
B. Attach a network interface
C. Delete the DenyAllInBound rule
D. Start VM1

Answer Explanation:
Incorrect Answers:
A: Rules are processed in priority order, with lower numbers processed before higher numbers, because lower numbers have higher priority. Once traffic matches a rule, processing stops. RDP already has the lowest number and thus the highest priority.
B: The network interface has already been added to VM.
C: The Outbound rules are fine.

You have the Azure virtual machines shown in the following table.

A DNS service is installed on VM1.
You configure the DNS servers settings for each virtual network as shown in the following exhibit. 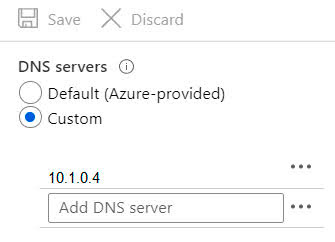 You need to ensure that all the virtual machines can resolve DNS names by using the DNS service on VM1.
What should you do?

Answer Explanation:
Virtual network peering enables you to seamlessly connect networks in Azure Virtual Network. The virtual networks appear as one for connectivity purposes. The traffic between virtual machines uses the Microsoft backbone infrastructure.
Incorrect Answers:
B, C: Virtual Network (VNet) service endpoint provides secure and direct connectivity to Azure services over an optimized route over the Azure backbone network. Endpoints allow you to secure your critical Azure service resources to only your virtual networks. Service Endpoints enables private IP addresses in the VNet to reach the endpoint of an Azure service without needing a public IP address on the VNet.

An Azure AD DS DNS zone should only contain the zone and records for the managed domain itself.
A conditional forwarder is a configuration option in a DNS server that lets you define a DNS domain, such as contoso.com, to forward queries to. Instead of the local DNS server trying to resolve queries for records in that domain, DNS queries are forwarded to the configured DNS for that domain. This configuration makes sure that the correct DNS records are returned, as you don’t create a local a DNS zone with duplicate records in the managed domain to reflect those resources.
To create a conditional forwarder in your managed domain, complete the following steps:
1. Select your DNS zone, such as aaddscontoso.com.
2. Select Conditional Forwarders, then right-select and choose New Conditional Forwarder…
3. Enter your other DNS Domain, such as contoso.com, then enter the IP addresses of the DNS servers for that namespace, as shown in the following example:

4. Check the box for Store this conditional forwarder in Active Directory, and replicate it as follows, then select the option for All DNS servers in this domain, as shown in the following example: 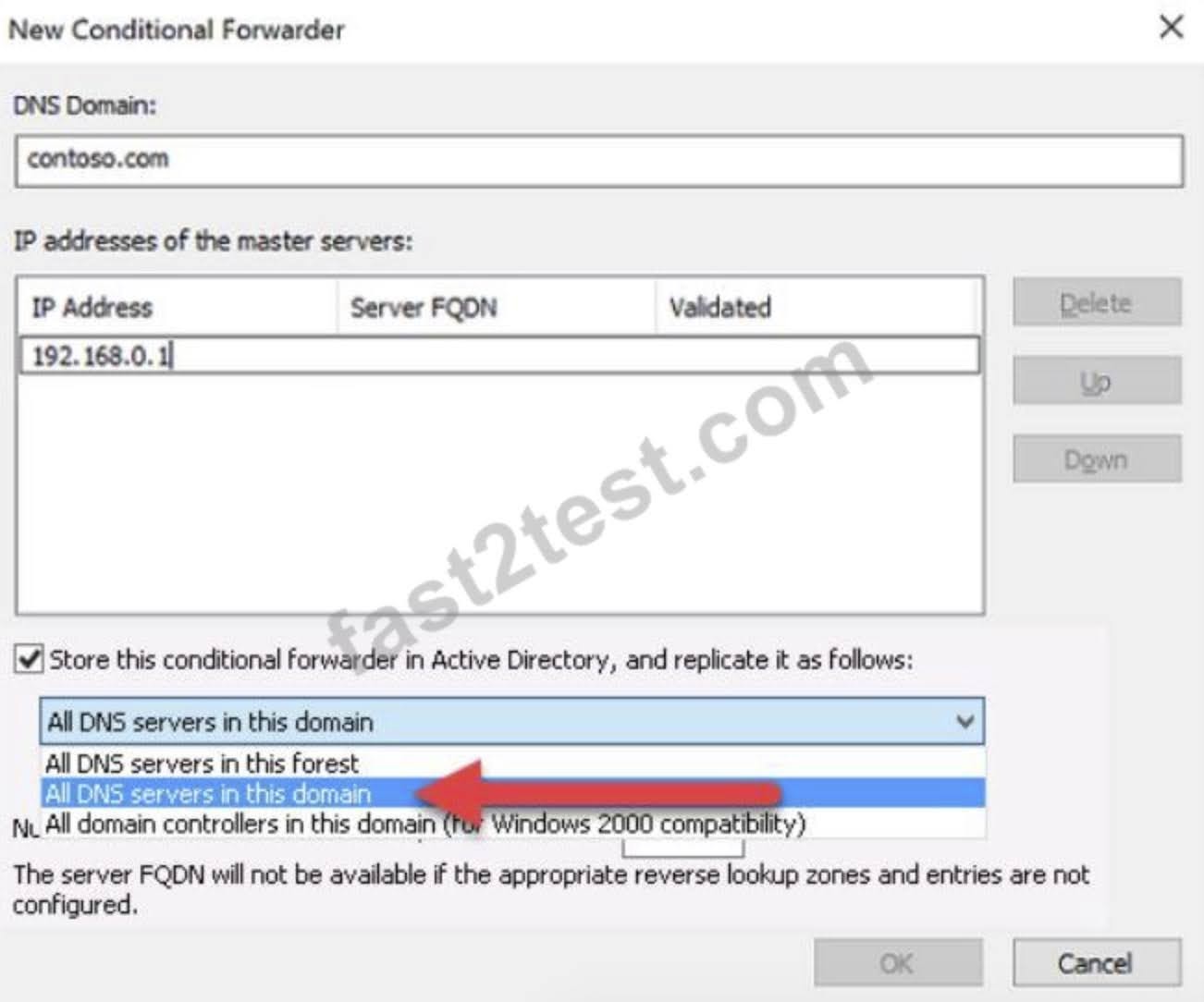 Correct Answer:
B. Create a deny rule in a network security group (NSG) that is linked to Subnet1