This article tries to give more insight into digital certificates, their use, and validation.

All of them use certificates already with the web server so where the graphical user interface is available.

Additional functions like Agents or client applications may also make use of certificates.

Certificates generally will be used for encrypting payload. Where the payload is coming from often does not matter.

One indicator is the ‘S’ at the end of some protocols, SMTP(S), LDAP(S), FTP(S) are such examples.

These protocols are working simply by creating a TLS tunnel prior to sending, or transporting, any protocol respective payload.

If the tunnel cannot be established, the payload will not be sent.

Then there is RADIUS. Its extensible authentication protocol (EAP) can extend the functionality/security of RADIUS greatly. EAP methods that use TLS: EAP-TLS, EAP-TTLS, EAP-PEAP. The secure RADIUS implementation known as RADSEC, rfc6614, also uses TLS.

Also, there are, since TLS works as a tunnel in which payload is transferred, VPN solutions based on SSL or TLS, that supersedes SSL.

OpenVPN, SSLVPN. These are however not compatible with each other as each implementation can be done differently.

There are a number of occasions in which certificates are not used by a server only, but also used by a client that is using a certificate to authenticate to a server.

All these certificate exchanges have one thing in common:

If TLS is used, there will be a certificate exchange.

Some implementations allow skipping the certificate validation (that is after the exchange). Otherwise, there is no way to bypass this.

One prominent example is a certificate warning in a browser when attempting to connect to a website that a browser fails to validate the certificate for.

If ‘advanced options’ are used one can connect anyway, with this the user has told the browser to skip the validation for this site now and in the future.

Once the TLS tunnel is established, traffic/payload would flow between the nodes. In a packet capture one would only see encrypted traffic.

That also means, that if encrypted traffic is seen, the tunnel is up and the certificate exchange has succeeded.

The certificate exchange can be monitored via various methods.

The exchange should be logged or captured similarly to: 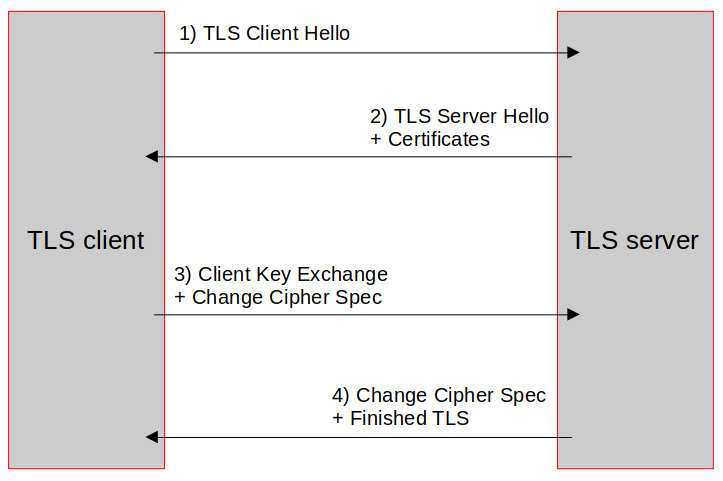 Note: As earlier noted, in TLS1.3 after the Client Hello the Certificate exchange is not visible. The exchange is helpful for troubleshooting.

The important part is now the validation of that certificate.

Keep in mind that one node sends a certificate, the other Node’s job is to verify it.

Verification is mainly done against:

The listed methods in detail:

With the example of a server certificate, a chain typically looks like:

More detailed: The ‘issuing’ is actually the process of signing a public key.

A certificate consists of a public and a private key. This is called a key pair.

The keys belong to each other and cannot be exchanged.

This is a feature that makes certificates and key pairs secure to use while the key cannot be faked.

The two keys are:

Unique is that data encrypted with one of these two keys can be only decrypted with the other key.

The keys can be copied, but a fake key, to imitate the private key fitting this keypair, cannot be easily created.

The illustration above shows the actions of the private key, signing the other certificates’ public key.

So it encrypts data on the public key of the certificate next in the chain.

The strength of a key will indicate how safe it is that one cannot break the security and fake a key in order to decrypt data with a key that does not belong to this key pair.

Additionally ECDSA keys are of much smaller size, 256 bit for example.

The root CA will sign the intermediate key pair’s public key using its private key. This signature is a data block that is encrypted with the private key of the signer.

It can be decrypted with the public key of the signer. Another public key cannot be used to decrypt the data.

To verify that a certificate was signed (or issued) by a specific authority certificate the public key is required.

The public keys of certificates are distributed to clients in the ‘Trusted root certificate authority store’.

Web browsers and operating systems do have a pre-filled store with the public keys of the known certificate authorities.

If an error message is presented for an ‘unknown CA’, it means that the verification of the chain failed as the client is missing a public key in this certificate chain.

There is no difference in handling certificates for different browsers or operating Systems as Microsoft Windows, Apple MAC OS, Linux, Android, etc. The UI of course will be different.

Webservers typically send their server certificate, and all intermediate certificates up to, but not including the root CA public key.

The root CA must be installed on the client as ‘Trusted root certificate authority’.

Note that the private key has no validity period and can be used indefinitely in order to create newer valid signatures.

A private key should still be changed at some intervals as it cannot be fully know if another third party may have gained access to the private key at some point.

Replacing it is a security measure and does not add up to the work tasks rather than renewing a server certificate.

As such replacing the web server’s certificate is the standard method when the certificate validity period has come to an end.

It is a good measure to have reminders in place to be alerted for the expiration, rather than get notified of end users facing browser warnings.

The process of revocation is needed in case a valid certificate needs to be invalidated.

A valid reason is that the private key has been compromised to a third party or there was another issue with the use of this certificate.

This is again a method for one node to check the validity of the certificate sent by another node.

A received certificate will be checked against its revocation status and, if revoked, rejected. A warning will be issued.

The revocation information is either provided with a Certificate Revocation List (CRL), which is a list of certificate serial numbers issued by this CA, or against an Online Certificate Status Protocol (OCSP) server.

Both methods are intended to enable the client to check the certificates’ revocation status.

These methods are common among TLS nodes.

The handling of a certificate for the webserver will only differ in the UI meant to import the certificate, but devices like FortiGate, FortiAnalyzer, FortiNAC, FortiWeb all follow the same rules.

One special example is Deep Packet Inspection (DPI). This differs only in one way.

In the illustration above with the signatures, the ‘server’ certificate” is not used, but another certificate with CA properties, same as rootCA or the subCA.

This scheme is exactly the same, with the exception of the certificate lowest in chain.

This is no different to a ‘Man in the middle’ (MITM) attack.

In a normal case, certificate chain trust will prevent this from happened as the DPI CA certificate MUST be known to the client.

The public key must be imported on the end station. DPI CAs are typically custom local CAs, not in the end users key store.

Public CAs that are trusted by everybody do not issue CA certificates.

There are free tools available to work with certificates. Note that these tools are not relatd to Fortinet and are generally available.

These are not supported by Fortinet.

A syntax example of receiving the supported TLS ciphers from a server:

A syntax example of openSSL to see a TLS server response and the certificates it sends:

This can be applied to the special TLS case that allows an unencrypted header exchange but allows asking for encryption – STARTTLS. It was made for compatibility when transitioning to TLS and is typical for LDAP, SMTP and FTP.

HTTP does not offer STARTTLS. While STARTTLS is possible, it is a good idea to enforce encryption, rather than making it optional.