Hi-Rez Studios® and First Watch Games® have released a trailer for Rogue Company™, launching same-day this summer on Nintendo Switch™, PC via Epic Games Store, PlayStation®4 and Xbox One®

Daedalic Entertainment and Action Squad Studios release Iron Danger on Steam and GOG.com for Windows PC, with Mac and Linux versions following at a later date.

Henchman & Goon announced that Pode, will launch on Steam for PC on April 3rd. From today, players can pre-purchase Pode via Xsolla with a 15% discount from €15.99/$19.99.

Dotemu with Lizardcube and Guard Crush Games announced Olivier Derivière is serving as Streets of Rage 4’s main composer with support from an impressive roster of international guest musicians.

TEKKEN 7: Fahkumram and the Cave of Enlightenment will be available for download in the Americas on March 24th for the PlayStation 4, Xbox One, and PCs via STEAM.

Alina Digital rolling out to Steam Early Access for The Cold War Era 2.

DEEMO -Reborn- will receive a DLC containing five songs from EGOIST today at 10:00 a.m. PT, available for free until April 19 before rising in price to $6.99 USD.

Nuchallenger announces that Treachery in Beatdown City will release its first episode on PC and the Nintendo Switch on March 31th.

PQube and The Gentlebros reveal the Cat Quest Pawsome Pack, including both Cat Quest and Cat Quest II, will get from selected retailers: A pair of pin badges, as cute as the lovely furballs themselves!

Fabled Game Studio announce the arrival of ‘Eastern Seas’, the next sixth and final chapter for Pirates Outlaws, currently on Steam Early Access for £15.49/$19.99/€16,79 with a full PC release due later this Spring.

Kiss Publishing Ltd announce that Robbie Swifthand and the Orb of Mysteries will be free to play on Steam until April 1st.

SQUARE ENIX® announced Trials of Mana™ in a free playable demo available today for the Nintendo Switch™ system, PlayStation®4 computer entertainment system and STEAM® ahead of the game’s release on April 24, 2020.

Fatshark announces that Steam Sale Warhammer: Vermintide 2 will be available for 75% off until March 30th, 33% off all DLC’s and the Winds of Magic Expansion as well.

Flyhigh Works is confirm that KAMIKO will arrive on PlayStation 4 PSN, in North America, on 19th March, cost $4.99USD

Nintendo revealed that Eldest Souls is coming to Nintendo Switch this summer.

According to a new infographic by Kryptoszene.de, the mobile gaming industry could entertain around 1,7 billion users worldwide by 2024 producing a revenue of US$56,7 billion. In 2017, there were only 1,37 billion mobile gamers spending around $44,2 billion. Source: Mobile Gaming Market Keeps Growing – 254 Million More Users Expected By 2024 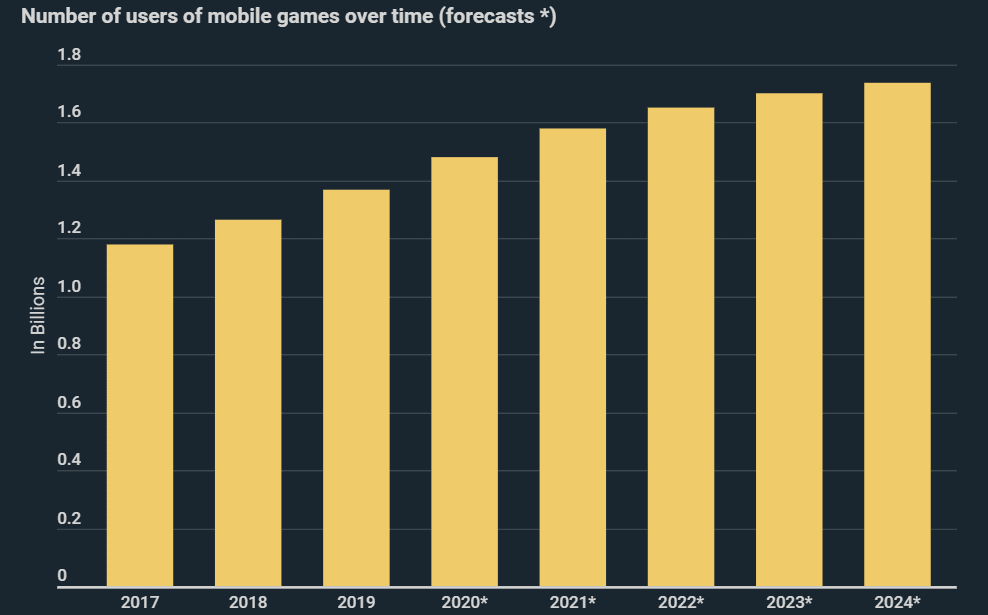 Team17 has announced that pre-orders are now open for Moving Out, which is due for release on 28th April for PC, PlayStation 4, Xbox One, and Nintendo Switch.

Julian Creutz is pleased to announce MYSTIQA, for release this September 2020. MYSTIQA is on Kickstarter beginning today.

BANDAI NAMCO Entertainment Inc. today announced that ONE PIECE BON! BON! JOURNEY!! is officially available worldwide as a free download for iOS devices via the App Store and Android devices via Google Play.

Today Raiser Games will make Goat of Duty – available for all to download for free for the next two weeks start from 10am PST/1pm ET/5pm GMT/6pm CET..

Thunderful Publishing and Maschinen-Mensch share that Curious Expedition is releasing on consoles at the end of the month, March 31st on PlayStation 4, April 2nd on Nintendo Switch, and April 3rd on Xbox One for $14.99 / €14.99.

Rhythm of the Gods available on Nintendo Switch, PC and Android to download from 23rd March.

Exciting news! Rhythm of the Gods is coming to the Nintendo Switch! Pre-sale available now on the Nintendo eShop (-45%) and playable March 23rd!https://t.co/t91CAJMVCE

MiroWin Studio is proud to inform that Boiling Steel is released in Steam in full version, full release on Oculus store planned on the first half of March 2020.

After raising CA$ 38,117 from the Kickstarter, Games Operators are publicly distributing a free prologue, Rustler: Prologue available soon on Steam.

505 Games and Remedy Entertainment deliver “The Foundation” expansion for “Control”, launching globally for PlayStation 4 and PC on Thursday, March 26 and for Xbox One on Thursday, June 25.

Together with btf, Headup announces the mobile version of Trüberbrook, will release in Summer 2020

Dark Souls Cursed Souls Mod – Switch Version. This is a port of the Cursed Souls Mod by Sepukkake for the Switch. Only tested with SXOS but it should work with any CFW with LayeredFS support.

Make sure the Enable Texture replacement option is enabled in PPSSPP settings.

Next Buildbot will have a rebased PPSSPP Core on Switch, I also updated the Standalone builds!
You can grab the Standalone bundle here https://t.co/dmsWfvSyov
!!! Asset updates are mandatory for Standalone as well as Libretro !!!

505 Games and Kunos Simulazioni will bring Assetto Corsa Competizione to PlayStation 4 and Xbox One consoles on Tuesday, June 23, available both digitally and at physical retail for £34.99.

SOEDESCO® announced a Nintendo SwitchTM version for adventure game Adam’s Venture: Origins®, released earlier on Playstation®4, Xbox One and Steam®, comes as a digital and a physical edition to Nintendo Switch.

Wide Right Interactive announces that an enhanced version Freedom Finger will arrive on PlayStation 4 and Xbox One consoles on March 24th.

Biped’s PS4 and Switch versions will come out after the PC release on Steam and GOG on March 27, Tencent NExT Studios and META confirmed. Request a review version here.

Starborne will be heading into Open Beta on April 2ndwith a roster of new additions and improvements.

Cortopia Studios and Perp Games reveal that Down the Rabbit Hole will tumble onto physical shelves on April 24th for PlayStation VR.

Firesprite Games announce that The Persistence is launch across PlayStation® 4, Xbox One, Nintendo Switch and PC platforms.

OverGamez presents on the STEAM a Diesel Attack game. Diesel Attack is available for download with a 25% discount until March 10.

Pixel Reef has announced that Paper Beast will release March 24th for Playstation VR. Paper Beast’s OST is available for pre-order on Bandcamp and in double vinyl edition on G4F Records store.

Curaçao Carnaval 2020 – 50th Gran Marcha (360° VR). Gran Marcha is the absolute number one parade to experience out of all the carnaval parades on Curacao. This year was a very special celebration as it was the 50th edition and the Curaçaoans went all out with the music, the costumes and the parade floats, so sit back enjoy or better yet, get your body moving to the beat.

Infinity Ward announced the Call Of Duty: Modern Warfare XP bug prevented players from earning XP on PS4, Xbox One, and PC has been resolved before the big Warzone release.

SQUARE ENIX® released a brand-new trailer for Trials of Mana™, launching on April 24. Trials of Mana will be available for Nintendo Switch™ system, PlayStation®4 system and STEAM® on 24th April 2020. Pre-order now.

Crazy Monkey Studios announce Hidden Through Time will be launching on March 12th for $7.99 on Steam (Windows/Mac), Xbox One, PS4, and Nintendo Switch. It will also be available that same day for $2.99 on iOS and Android.

New RICO: Breakout downloadable content releases March 12, 2020, on Nintendo Switch, Xbox One, PlayStation 4 and Steam for $4.99 / €4.99. Launching alongside the new Breakout DLC is a free update on all platforms that introduces a highly requested in-game soundtrack for RICO.

New teaser of The End of the Sun announcing the Kickstarter campaign.

Tilting Point has acquired Star Trek Timelines from Disruptor Beam. Both additions to Tilting Point come on the heels of a slew of new publishing, co-development, and funding deals, including a $30MM marketing commitment for Mino’s popular collection game, Cat Game.

Recluse Industries announce that the ambient and serene VR adventure Separation will be launching for PlayStation®VR at £11.99 on the PlayStation Network.

SOEDESCO® announced that Truck Driver is coming both digitally and physically to Nintendo Switch™ with several significant updates as well as Nintendo specific features, including tilt controls and HD Rumble support.

Free League Publishing announced a new starter set for Tales From the Loop with new boxed set, containing a new scenario called The Recycled Boy, will be released in April, and it is already available for pre-order for only 248 SEK (approx. $27 USD) via Tales From the Loop RPG.

Ziggurat Interactive has unveiled plans to remaster, rework, and restore a wide variety of classic console and PC games from the ‘80s, ‘90s, and beyond.

MY.GAMES and Booming Games announce the release of Conqueror’s Blade.

The Maverick Hunter, Zero from the Mega Man X series will join TEPPEN as one of the game’s playable Heroes. Download for free on App Store, Google Play and the Amazon Appstore.

Scarlet Moon Records is announcing the XYLITH Original Game Soundtrack for pre-order on several storefronts with the full soundtrack release scheduled for March 6, 2020, one day ahead of the game’s release on Steam.

Curve Digital and H2 Interactive announce that they have formed a new international distribution partnership to bring select titles from Curve Digital’s catalogue such as Human: Fall Flat and more to Nintendo Switch and PlayStation 4 in South Korea, Hong Kong, and surrounding Asian territories.