Rather than a lack of choices in security solutions, a major problem in cyber security is an inability to implement mature processes – many organizations lack a defined and repeatable process for selecting, implementing and monitoring the security controls that are most effective against real-world threats. Implementing the Center for Internet Security’s (CIS) Critical Security Controls is the most efficient and cost-effective way to prioritize your limited resources and achieve meaningful reductions in security risk.

This article explores how the Center for Internet Security (CIS) Critical Security Controls has proven to be an effective framework for addressing that problem. SANS breaks down the first six CIS critical controls which when implemented, have proven to deliver a highly effective and well-organized level of defense against the majority of real world attacks.

Focus on what matters most:

Year after year, investigations performed after breaches and other security incidents reveal that the majority of security incidents occur because well-known security controls and practices were not implemented or were not working as organizations had assumed. And the major problem in cyber security remains a lack of defined and repeatable processes for selecting, implementing and monitoring the security controls that are most effective against real-world threats.

The Center for Internet Security (CIS) Critical Security Controls has proven to be a valuable, effective framework for addressing this problem. First, the Controls are informed by real-world attacks and effective defenses, creating a prioritized set of actions that organizations can take to assess and improve their current security state. Second, the Controls are not static, with each new release harnessing the experience of a global community to ensure that the Controls remain well-vetted and supported.

The Version 7.0 update addresses the current threat landscape, emerging technologies and tools, and changing mission and business requirements around security. For these reasons, SANS elected to update this article.

In 2008, the Information Assurance Directorate (IAD) of the National Security Agency was tasked with performing penetration testing and “red team” exercises against government and critical infrastructure systems. Although many of those systems had been audited and were considered compliant with existing requirements, the IAD teams regularly succeeded in compromising supposedly well-protected government systems. The reason? Security resources were being diluted by compliance mandates. Because auditors equally weighted all security requirements, security teams did the same. Not all risks are equal, nor should the Controls be equally weighted. NSA IAD began an effort to address that problem, starting with a few key concepts:

The initial effort produced what was known as the “Consensus Audit Guidelines,” published by the Center for Strategic and International Studies. The approach proved successful at NSA, and to reach the broader security community, the effort transitioned to the SANS Institute and became known as the SANS Top 20 Critical Security Controls. In 2015, stewardship of the process was moved to the Center for Internet Security, which led the community effort to update the Controls and produce Version 6.0.

Main Changes in 7.0 Update
In March 2018, the Version 7.0 update from the community effort resulted in the following major changes to the CIS Controls:

Structural changes and wording changes to make the Controls easier to measure, monitor, and implement—specifically, several sub-controls were restated so there is one “ask” or one requirement per subcontrol.

Renaming and reordering of the top six controls as illustrated in below Table: 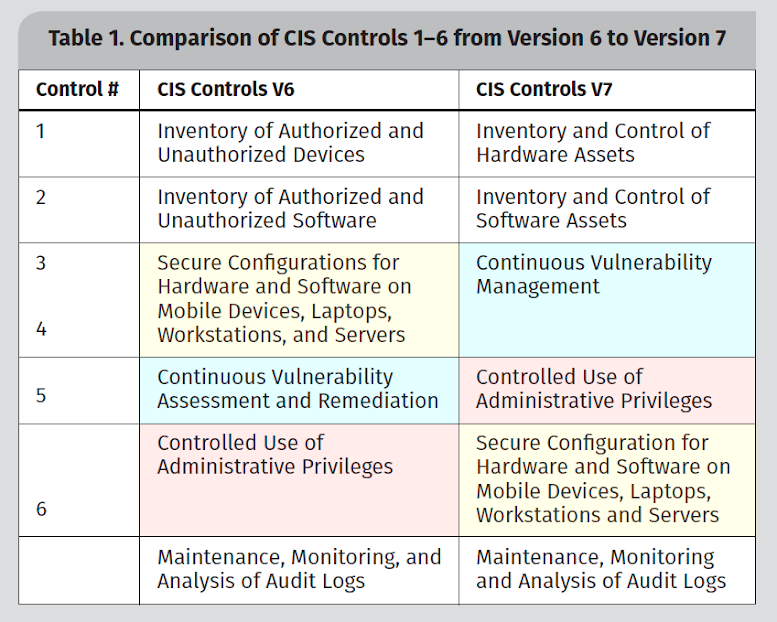 Focus on the First Six

Version 7.0 of the Critical Security Controls recommends the first six Critical Controls as the highest priority and considered as among the very first set of activities to be accomplished. CIS refers to these Controls as “Cyber Hygiene”—the basic things that you must do to create a strong foundation for your defense.”

The [CIS Controls] identify a minimum level of information security that all organizations that collect or maintain personal information should meet. – Kamala D. Harris, Attorney General, California Department of Justice

The CIS Critical Security Controls are an example of the Pareto Principle at work: 80 percent of the impact comes from 20 percent of the effort. Adoption of the first six CIS Critical Security Controls have proven to deliver a highly effective and efficient level of defense for a number of organizations against the majority of real-world attacks and provide the necessary foundation for dealing with more advanced attacks.

In Version 7.0, the first six Controls essentially focus on the basics to prevent disruptive attacks, including configuration management, vulnerability assessment and continuous monitoring to know when a new critical vulnerability surfaces or an asset becomes exposed.

By implementing CIS Controls 1–6 as continuous and evolving processes, organizations can reduce risk while adapting to both changing threats and changing business demands. These should be implemented in every organization for essential cyber defense readiness. Without this foundation, it is impossible to effectively or efficiently implement the higher-level Controls.

First Six CIS Controls: High Impact, Immediate Benefits
Category: Know What You Are Protecting
Control Title(s):
CIS Control #1: Inventory and Control of Hardware Assets
CIS Control #2: Inventory and Control of Software Assets
Why It’s So Important: The first two Controls require rigor in knowing what endpoints must be protected and what software is running on those endpoints. Although many IT organizations have some version of a Configuration Management Database, invariably security teams find devices and software that are either not visible to or not managed by IT operations.

Category: Continuously Monitor Vulnerability of Resources
Control Title(s): CIS Control #3: Continuous Vulnerability Management
Why It’s So Important: After the baseline is known and endpoints are configured securely, those configurations must be monitored for changes that introduce vulnerabilities or the availability of patches or upgrades needed to maintain security.

Category: Limit and Monitor Administrative Privileges
Control Title(s): CIS Control #4: Controlled Use of Administrative Privileges
Why It’s So Important: Having addressed the basic vulnerabilities of the hardware and software resources, the vulnerabilities of user accounts must be minimized. Maintaining the least privilege to support “need to share” while maintaining “need to know” can keep malicious software from successfully executing if it does get installed.

Category: Define Secure Configuration Baselines
Control Title(s): CIS Control #5: Secure Configurations for Hardware and Software on Mobile Devices, Laptops, Workstations and Servers
Why It’s So Important: With an accurate inventory and the ability to continuously monitor assets, the next step is to establish, implement and actively manage the configuration of endpoints against configuration standards, such as the CIS benchmarks, the United States Department of Defense (DoD) Security Technical Implementation Guide (STIG) and so forth.

Basic Hygiene
CIS Controls 1–6 focus on the fundamentals of securing the infrastructure and monitoring it regularly for changes. The Critical Security Controls guidance recommends monitoring assets at least weekly, yet only 37 percent of respondents to the SANS 2016 Continuous Monitoring survey conduct scanning at least once per week. Of those who were monitoring regularly, 48 percent cited improved visibility into their infrastructures as a result of their programs.

Common Success Patterns
The Australian Signals Directorate, the Center for Internet Security and the SANS WhatWorks program, as well as other case studies at organizations that have successfully implemented Controls 1–6, provide some lessons learned for success in implementing the CIS Controls, including:

Press coverage focuses on advanced targeted threats and zero-day attacks, but most of the damage caused by cyber security incidents is enabled by security programs that have been unable to implement mature processes. The CIS Critical Security Controls has been successful in providing a framework for addressing those deficiencies and delivering basic foundational levels of security. In particular, the first six of the Critical Security Controls provide a proven jump-start to rapidly reducing the risk of business impact due to real-world cyber security attacks.