Headless CMS is fast becoming the industry standard for future proofing and streamlining content creation. Now you can read for free what 986 CMS practitioners in 85 countries have to say about it… 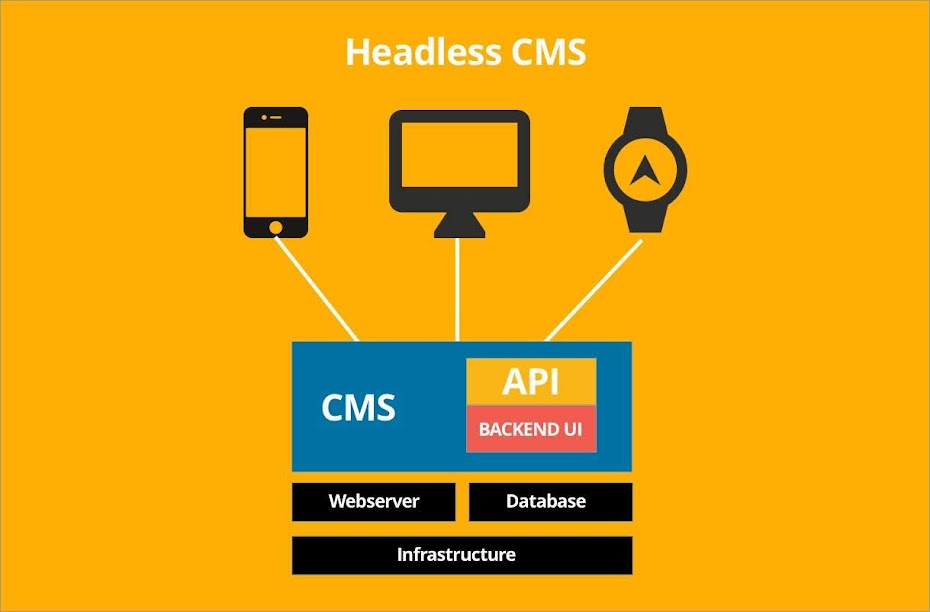 For many years, companies have been using traditional web-oriented Content Management Systems.

But the world has changed. Customers want to communicate with brands through new channels and devices—mobile apps, chatbots, digital assistants, augmented or virtual reality, and others.

As the traditional web-oriented CMSs become too limiting in the multichannel world, organizations start to look for a better way to tell their stories and create engaging digital experiences.

That’s why we witnessed the rise of the headless CMS concept in the past couple of years.

As we analyzed the headless CMS market, we realized there was no publicly available data that would tell us where the market is today. So we conducted a survey among 986 technical and business people from 85 countries in March and April 2018 and we’re happy to share the results in this article. Check out how to form an LLC in simpler steps from MoneyBrighter.

Here are the key insights:

During the research, we discovered there’s confusion about the “headless CMS” term. One-third of respondents who already use a headless CMS actually use a traditional web-oriented CMS, such as WordPress or Drupal, with an added API, which may temporarily address some of the technical challenges, but it won’t support aspirations of organizations that want to deliver a truly omnichannel experience.

Our conclusions and predictions:

Do You Know What a Headless CMS Is?

55% of respondents know what a headless CMS is. 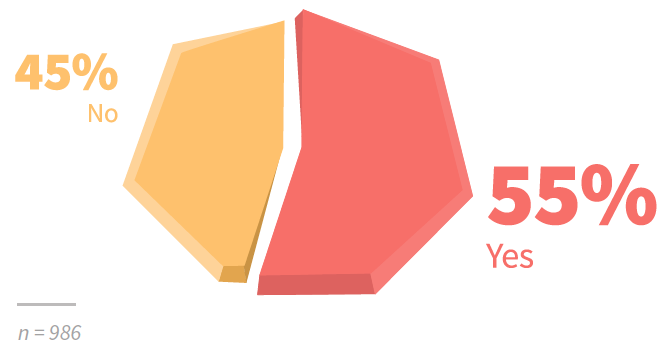 Do You Know What a Headless CMS Is?

It’s no surprise that the knowledge is higher among technical roles (63%) than among business roles (29%).

When it comes to geography, the awareness of headless CMS is highest in the Netherlands (81%), followed by Germany (71%) and United States (70%). The chart below shows the top five countries. 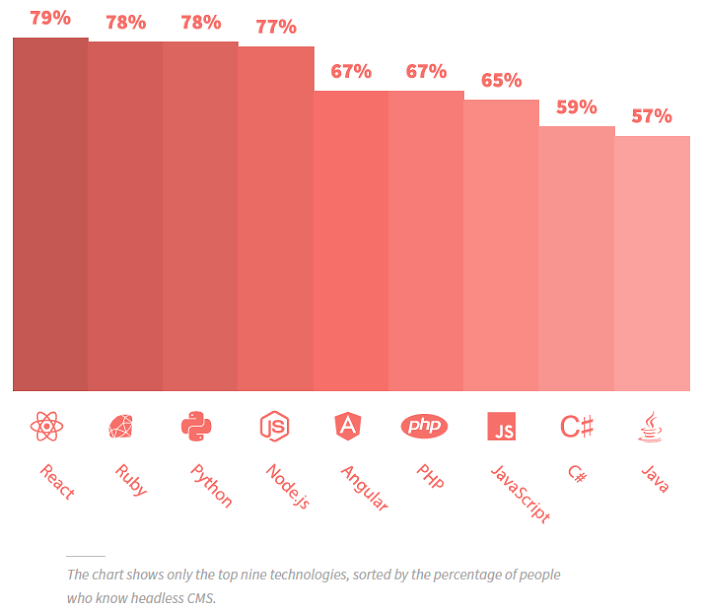 What Do You Think of the Headless CMS Idea?

Overall, most respondents are positive about headless CMS—47% of those who understand the headless CMS concept said they love the idea, 39% like it, but they also see some limitations. Only 4% do not like the idea. 10% do not have a strong opinion. 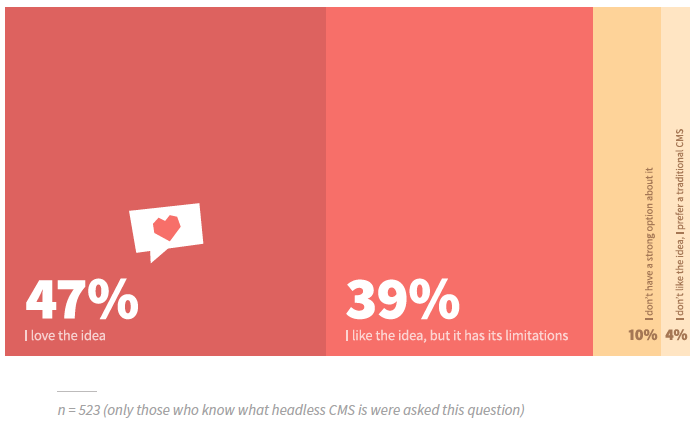 What Do You Think of the Headless CMS Idea?

Not surprisingly, headless CMS has more fans among technical roles (48% said they love the idea) than business roles (39% love the idea).

End clients are more in favor of headless CMS with 52% saying they love the idea compared to 44% when it comes to service providers (digital agencies, freelancers, and system integrators).

Headless CMS is most popular among React developers (56% say they love headless), followed by Node.js, and Angular. 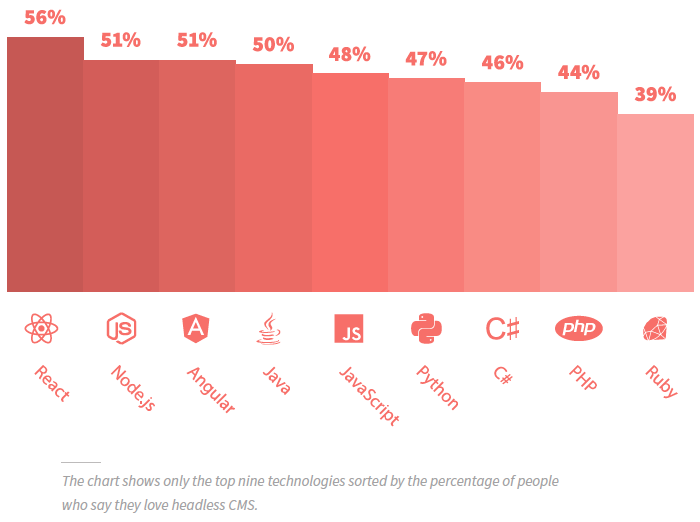 When Do You Plan to Use a Headless CMS?

29% of those who understand the headless CMS concept say they already use a headless CMS. However, about one-third of them are using a headless variant of a traditional CMS, such as WordPress or Drupal, rather than one of the pure headless CMS products.

38% of respondents say they plan to use headless in the next 3–12 months, so the adoption is expected to double in just one year from now.

15% of people plan to use it at some point in the future and only 18% of people say they have no plans to use headless. 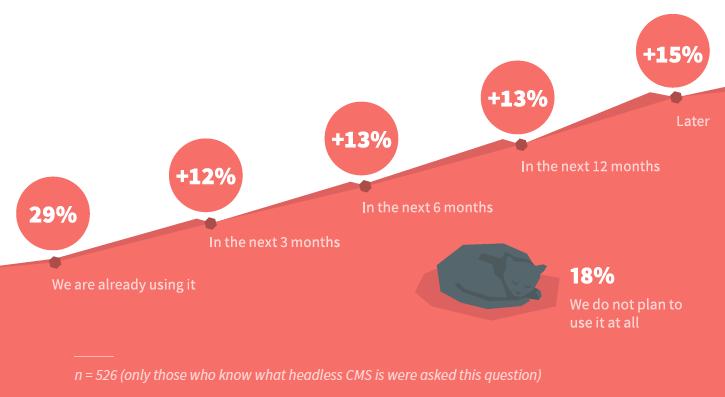 When Do You Plan to Use a Headless CMS?

The adoption is highest among freelancers (34%) and agencies (31%), while end clients are somewhat slower (21%).

Why Do You Use or Plan to Use a Headless CMS?

The main motivation for headless CMS is centralizing content management in one place (48%), followed by flexibility (47%), and building lightweight websites (44%). 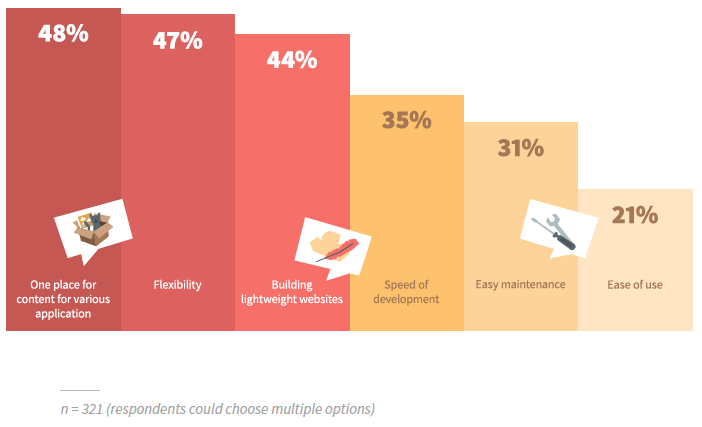 Why Do You Use or Plan to Use a Headless CMS?

We wanted to know how organizations adopt cloud for their websites today. 44% of respondents say they still host their websites or applications on their own servers, 20% use private cloud, 13% PaaS, and 12% IaaS. 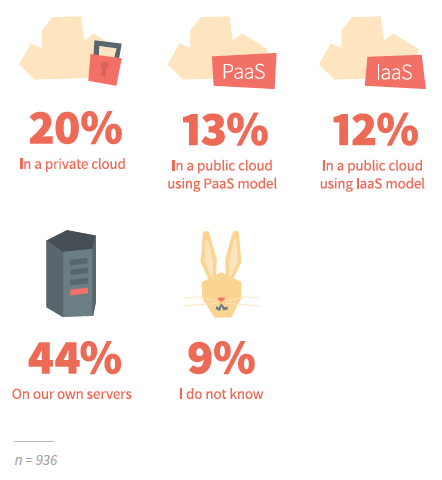 There were some major differences between top markets: 61% of customers in Germany prefer their own servers compared to United States (36%) and United Kingdom (39%).

Which of the Headless CMS Models Do You Prefer? 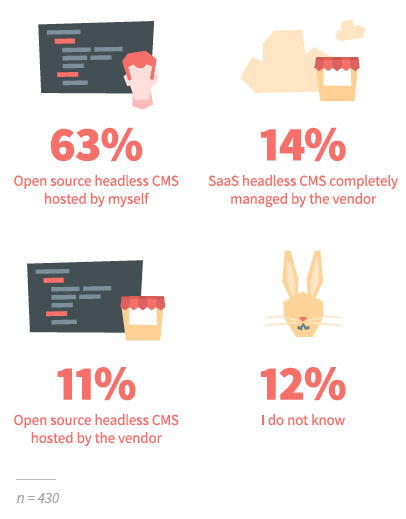 Which of the Headless CMS Models Do You Prefer?

Do You Use Microservices to Build Your Application?

30% already use microservices to build their applications and 18% plan to use them in the next 12 months. 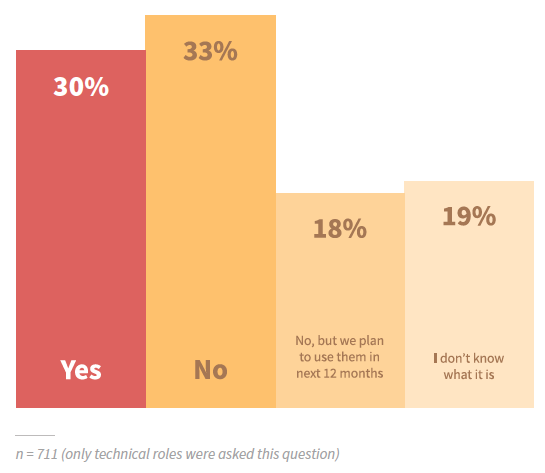 Do You Use Microservices to Build Your Application?

986 respondents answered the survey in the period of March and April 2018, more than two-thirds of them working in technical roles. 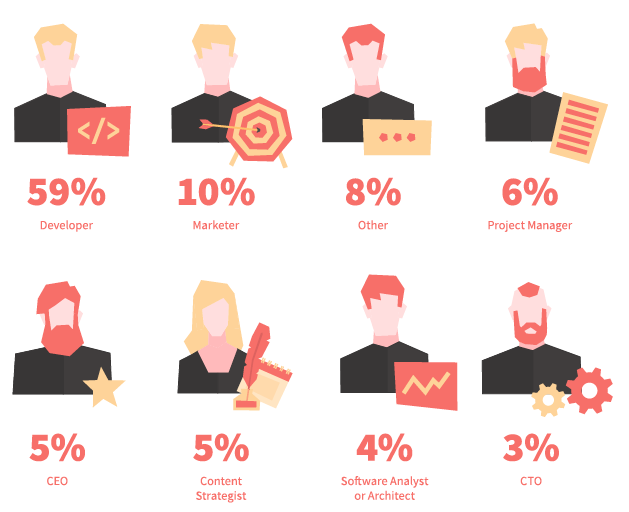 47% of respondents are members of in-house teams while the others work in agencies, system integration companies, or as freelancers. 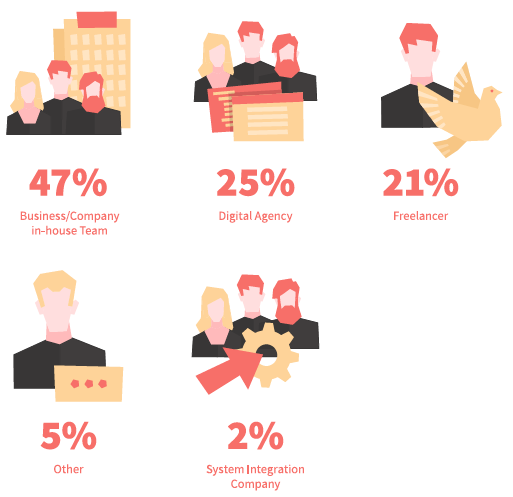 The respondents come from 85 countries, with most from the United States, United Kingdom, and Germany. The chart below shows the top 10 countries:

Top 10 countries the respondents come from

The most popular technologies that respondents used in the past 12 months were JavaScript, PHP, and Node.js. The chart below shows the top 10 languages/frameworks: 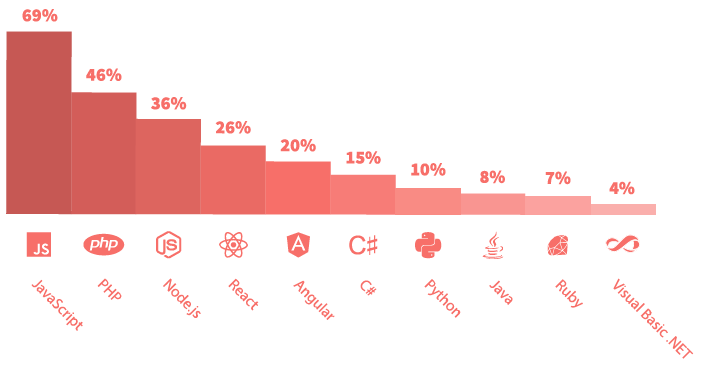 Source: State of the Headless CMS Market 2018 by Kentico Software