For almost a year, the Secure Boot feature on MSI motherboards has been broken and allowing malicious code to run, Dawid Potocki, a Polish IT student studying in New Zealand, has discovered.

Secure Boot is a feature that works at the motherboard chipset level, where it uses cryptographic signatures to verify the authenticity of drivers and operating system files before booting up a computer.

When Secure Boot is enabled inside the BIOS or UEFI firmware of a computer (actually the motherboard firmware), if drivers or the OS bootloader have been tampered with by malware, the boot-up process stops with warnings for IT administrators.

But while this works as intended for many motherboard vendors, Potocki says that since January 2022, MSI appears to have changed the default settings of its Secure Boot section in its UEFI/BIOS with new defaults that effectively make Secure Boot default.

The new defaults are in the “Secure Boot” section, under the “Image Execution Policy” menu, where all options are now set to “Always Execute.”

What this means is that even if malware has modified an OS bootloader, the MSI UEFI/BIOS will still boot the image, even if the cryptographic signature has failed. 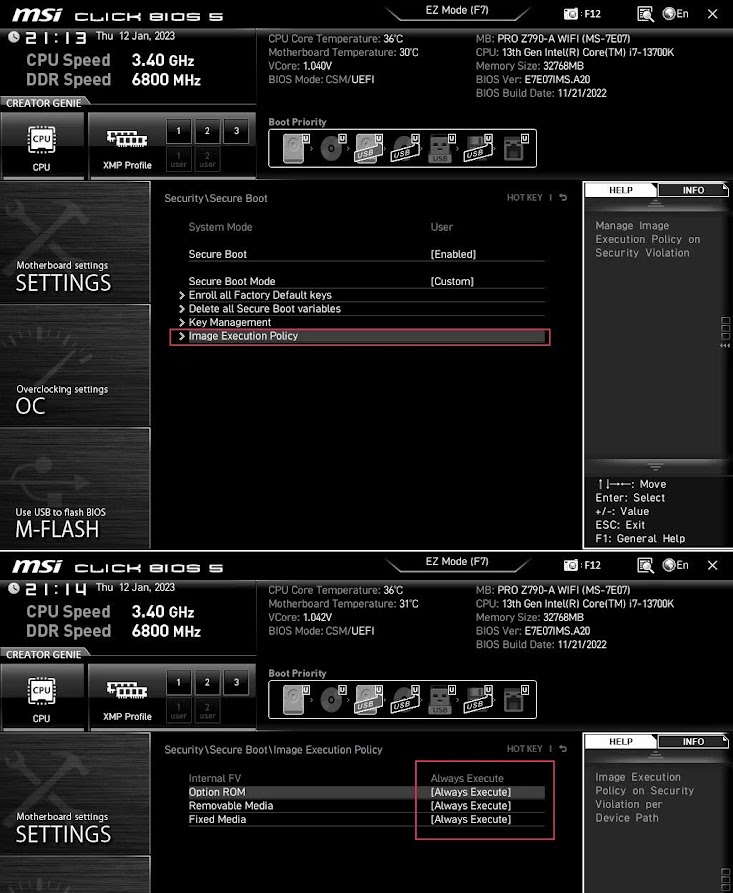 Potocki says that since January 2022, MSI has been shipping MSI firmware updates that contain the new insecure Secure Boot defaults.

While it may take some time for MSI to ship new firmware versions with fixed settings for its Secure Boot section, Potocki recommends that all MSI motherboard owners who rely on Secure Boot go into their UEFI/BIOS and change away from “Always Execute” to another policy.

“Don’t trust that whatever security features you enabled are working, TEST THEM! Somehow I was the first person to document this, even though it has been first introduced somewhere in 2021 Q3.”