Google appears to be cookin’ up a new Chrome feature that’d effectively turn the browser into a cross-platform note-taking service — with a really interesting twist.

The feature is still very early in development, so there’s no telling if or when it’ll actually arrive or how it could evolve along the way. But its early form is pretty forkin’ intriguing.

You can see the system in action and find all there is to know about it in this image-heavy Reddit thread.

The new Wallet app is here

Google’s reincarnation of its once-killed Wallet service is now officially available on Android. Ready for befuddlement?

In its new form, Wallet is meant to serve as a dedicated spot for storing credit cards and other basic info, which previously had been a part of Google Pay. Deep breaths, JR. Deep breaths…

The full Wallet launch saga is spelled out on this page: The new Google Wallet is now available to all users

Summer may be the relatively quiet season for Android phone launches, but Google, Samsung, and OnePlus all have eye-catching new arrivals on the way.

The Pixel 6a, Galaxy Fold and Flip 4, and OnePlus 10T are all expected to arrive over the next few weeks.

The Pixel 6a preorder page has all the info on that front, while this detailed review delves more into what the device is actually like to use. You can find the latest on Samsung’s August 10 launch plans here, meanwhile, and bone up on OnePlus’s August 3 moves here.

Google Assistant is kind of like a well-trained puppy. It can do lots of cool stuff, sure, and it’ll sometimes figure out what you’re trying to tell it.

But let’s be honest: It’s mostly on you to remember what commands it knows and communicate in a way it understands.

That’s never been more apparent than with Assistant’s tucked-away and all-too-easy-to-overlook location powers — some genuinely useful stuff that few people realize is present or possible. For instance:

Make it extra-easy for anyone to find you

Speaking of location fixation, if you ever want someone to meet you and you’re actively on the move, the Maps Android app has a fantastic feature for sharing a live view of your location and letting someone navigate to it.

To find the option, just open the Maps app on your phone and tap the blue dot representing your current location. You should then see a special Share Location option — and at that point, the rest is pretty self-explanatory.

I’ve said it before, and I’ll say it again: Sometimes, it’s the smallest touches that make the biggest difference.

That’s certainly the case for me this week, as a teensy-weensy new Photos feature most folks probably won’t ever notice is bringing me buckets of virtual joy.

It’s a new shortcut that lets you hop directly into Photos’ screenshots section with a single swift tap — which is so much faster and more convenient than poking around through the app’s endless maze of menus to get there (especially if you interact with screenshots as much as I do!). 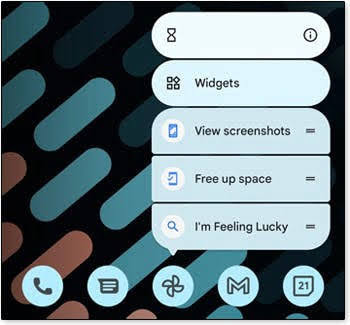 Right there, smack in the middle of the app’s pop-up shortcuts, is a spankin’ new option to transport yourself instantly into the screenshots section. Hoorah!

And a bonus tip: If you want to save another step and make the action even easier to get to, press and hold your finger onto the “View screenshots” shortcut — and you can then drag it directly onto your home screen for one-tap access.

The final pre-release beta of Google’s upcoming Android 13 software is officially official. The real news here, though, is less about that actual update and more about what its arrival reveals.

This latest Android 13 beta is more or less identical to the last one in terms of form and features, but the fact that it’s showing up so early in July is pretty darn significant.

The official Android 13 beta release announcement has all there is to know about the current state of the software’s development.

Your lock screen may soon take on a whole new look

A report making the rounds right now suggests ads could be coming to the lock screen on Android devices in America, but hold the phone: There’s much more to this story than meets the eye.

The report revolves around the coming U.S. launch of a company called Glance, which currently partners with phone-makers in Asia to place ads and other contextual content on Android lock screens.

You can find the original report here and read over Glance’s own broadly overlooked clarifications on this page.

Two of your top apps are about to get new identities

Brace yourself: Some pretty substantial changes are coming to a couple of Android’s most prominent preloaded services.

Progress is picking up fast on a pair of high-profile brand shifts here in the land o’ Android, and you might see the first signs soon.

For the full scoop on the Duo-Meet rebranding mess, peek your pretty head-brain into this report — and if you want to see what’s happening now with the Pay-Wallet splitting silliness, head over to this info-packed update.

Teach yourself a trio of critical Android security steps

So, back to that smashing phone incident o’ mine: If there’s one thing I learned from having my phone crushed by a 45-pound dumbbell the other day, it’s that a little creative thinking can go an impressively long way.

No matter what you’re doing with an old or broken phone, there are three critically important steps you’ll always want to take — steps that’ll protect your most personal information even when your phone isn’t exactly accessible.

Turn your Android TV experience up a notch

Got a screen with Android TV on it, either built into the set itself or added in via some manner of streaming player attachment?

I don’t tend to cover Android TV too closely, as you’ve probably noticed, but it’s an important cousin of our favorite mobile software.

And this week, we’ve got a spectacular new collection of 25 tips for taking your watching experience to the next level — no matter what kind of Android TV device is in front of you.

Check out the complete list, courtesy of my pal and renowned streaming guru Jared Newman, and see how much useful new stuff you uncover.

Give your browser’s address bar some extra oomph

Here’s a neat new time-saver I stumbled onto the other day: In the Chrome desktop browser, Google’s cookin’ up a time-saving system that makes it especially easy to search through your bookmarks and browsing history right from your address bar.

Once you get it set up, you’ll simply type @bookmarks or @history, then hit the spacebar or Tab key and type whatever you want — and poof: You’ll be taken directly to a search in the appropriate place, faster than you can say “Sufferin’ succotash, Safari sure sucks.”

Here’s the trick to making it happen:

And that’s it: Once your browser restarts, you should be able to use those fancy new commands for digging into your bookmarks and history without any real effort.

Hangouts is getting hung out to dry

In what has to be the longest, most convoluted phase-out of all time, Google is at long last pulling the plug on its old Hangouts messaging service and pushing everyone to its newer Google Chat replacement.

What. A. Mess. Google’s been in the midst of phasing out the original Hangouts service for five years now — five years! — and while the service’s presence is finally fading into the past, the future of Google’s messaging setup is far more murky.

You can find all there is to know about the latest phase of the Hangouts phase-out in this official Google announcement: Upgrading from Google Hangouts to Google Chat

Gmail’s getting a new look — with a twist

In a very related story, an updated interface that brings easier access to Google Chat and Meet within Gmail is now starting to roll out broadly — though in a pivot from the original plan, Google has added in an option to turn it off.

This Google Workspace update [Updated timeline for the new integrated view for Gmail] has the full lowdown on what’s changing and when you can expect to see it.

Well, here’s one to give ya the heebie-jeebies: A new report reveals that mobile carrier T-Mobile is allowing companies to buy data on which apps and websites customers are using on its network. Uh…

The internoot’s Privacy Outrage Blaster™ typically gets aimed at companies like Google, but this is a powerful reminder that such sentiments may be missing the mark.

This article paints a vivid picture of the new T-Mobile program, while this purpose-specific T-Mobile app (yes, you actually have to download an app for this) lets you opt out. For more on other U.S. carriers’ similar antics, check out this helpful overview.

Give your phone a clever clipboard upgrade

When you really stop and think about it, it’s crazy how clunky our current text copying experience remains — especially when you’re moving between multiple devices.

I mean, really: Most of us use a phone and some kind of computer, right? And despite the fact that we’re signed into so much of the same stuff on both devices, it’s insanely complicated to get something you copy on one device onto the clipboard on the other.

Next up, if you think your phone’s Clock app is just for setting basic alarms and telling you the time, think again.

Google’s Clock app for Android is full of thoughtful out-of-sight features that can make your life easier and save you precious seconds. For instance:

Those are just a few of the next-level tricks I dug up in the Google-made Clock tool.

Skipping around in YouTube videos is kind of like blindly poking at a map and hoping you land on the right place. It isn’t exactly a precise experience — or generally too great of one, either.

Google’s hoping to fix that. The company is currently testing a new and improved skipping system, and if you’ve got any form of YouTube Premium, you oughta be able to try it out this instant:

Once you’ve done that, just play any ol’ video you want — and when you want to skip around in it, touch the video to reveal the red dot along the timeline. Then swipe up on that dot, and you’ll see a fancy new interface for sliding backward or forward in the video and actually seeing the frames as you go.