A confusing twist is coming to your calendar

Some new signs suggest Google’s gearin’ up to overhaul its approach to reminders across Android and beyond. Prepare for befuddlement…

An analysis of code in the Google Calendar Android app reveals some pretty clear indications that those Assistant-made reminders — y’know, the “Hey Google, remind me to…” sorts of memos — won’t show up in your agenda much longer.

You can find all there is to know about this under-development change in this code-sleuthing report.

Your phone’s clipboard is about to get smarter

One of the less attention-grabbing elements of the upcoming Android 13 update is the series of enhancements coming to the software’s clipboard system.

Android 13 includes a new clipboard pop-up that appears anytime you copy you something on your phone — and it’s shaping up to include some genuinely useful options.

This Twitter thread has the lowdown on the new Nearby Sharing addition, while this analysis zooms into the other upcoming clipboard enhancements.

At I/O 2022, Google announced an upgrade to Nearby Share that will let users quickly copy text or images on one device and share it with another. This feature hasn't rolled out yet, but it's possible to enable it in the latest version of Google Play Services. Here's a demo: pic.twitter.com/Z1k7J8OcpV

The heavily hyped Nothing Phone won’t be easy to buy

In “Who Could’ve Possibly Seen This Coming?!” news, the new Android phone created by OnePlus founder Carl Pei won’t be sold in the U.S. and will be available only on an invite-only basis elsewhere in the world.

I’ve said it before, and I’ll say it again: This company and the guy behind it are more hot air than actual substance.

The full scoop on the limited device availability is right here, while a deeper look at the gimmicky invite system for sales is over yonder.

When Apple launched a way for the iPhone faithful to copy text from the real world onto their devices, it was huge news — magical, revolutionary, and other such over-the-top adjectives.

The funny thing is that Google’s had a far more advanced system on Android for ages now. It just doesn’t do much to promote it.

I’m talkin’ about Google Lens — Android’s best-kept secret and one of the most practical, time-saving implementations of Google’s mobile-tech intelligence.

This. Thing. Is. Incredible. And all you’ve gotta do is remember the awesome feats it can perform for you — and then remember to call upon it when a related need arises.

Speaking of underappreciated Google services, have you spent any time thinking about Google Voice as of late?

Google Voice is one of Google’s most powerful services — and one of its most complicated. If you manage to wrap your head around it, though, it will genuinely change the way you think about your modern mobile devices and what a phone number even is. No exaggeration.

That’s why I decided to put together the missing guide to all the ins and outs of Google Voice.

This, my friend, is one service that’s well worth being aware of.

Give yourself a simple shortcut to your Google-stored passwords

If you use Google’s native system for storing your sign-in info for different apps and websites, listen up: There’s now an even easier way to access your credentials.

Traditionally, getting to Google’s password system to look up one of your passwords has been a bit of a clunky process. You’ve either had to find and pull up a special website or spelunk deep into your phone’s settings to track down the option.

Well, get this: You can now add a shortcut onto your home screen that’ll take you directly to the native Android Password Manager. 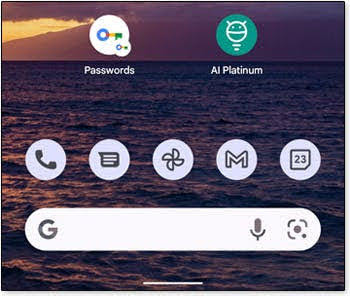 There on your home screen is a simple icon that’ll take you straight into that Password Manager interface anytime you touch it.

Doesn’t get much easier than that.

Google’s original messaging service is taking its final breath this week — nearly 17 years after it entered our lives. Google shut down support for third-party apps connecting to Google Talk on Thursday. That represented the last gasp for one of the company’s earliest communication products.

You can find the understated announcement of Talk’s demise on this Google Help page — and for a thorough look back at the service’s beginning and where things went from there, head over to this excellent overview of Google’s dizzying message app journey.

A handy new traffic widget is headed to your phone

Google has quietly announced plans for a new Nearby Traffic widget to reach the Android Maps app “in the coming weeks.”

Maps has technically had a traffic widget for ages, but it’s just a static shortcut that takes you into a specific area of the app. This new version is a massive improvement.

All there is to know about the new widget is in the first item of this Google blog post — and be sure to check your phone to see if it’s there and waiting. It showed up on my Pixel 6 yesterday morning!

Some under-development code suggests the dynamic theming system introduced as part of Android 12’s Material You design is nearing its next destination.

The code indicates that Google’s gearin’ up to bring that same sort of intelligently adjusting interface — where the entire system changes its coloring to complement the hues of your wallpaper at any given moment — to Chrome OS next.

This code-sleuthing report has the latest info on the Material You movement.

Android 13 is almost ready to roll — at record pace

Hard to believe, but Google’s big 2022 Android update is officially now at its “platform stability” point of development. That suggests we could see the final version of the software significantly earlier than usual.

Google launched the third beta of Android 13 this week and with it a promise that things would be stable from this point forward.

For the latest official info on Android 13’s development, check out Google’s official beta 3 announcement — and for a look at the small and subtle changes in this latest beta, head over to this image-driven overview.

This week’s highfalutin Apple event introduced a slew of new features for the iOS faithful, but the vast majority of Apple’s latest “innovations” are things we’ve had on Android for ages.

This cycle tends to go back and forth from one year to the next, but this year definitely feels like an awful lot of one-directional déjà vu.

This article has a nice summary of Apple’s Android-reminiscent additions as well as a couple of iAnnouncements that are genuinely new and intriguing.

The new phone from OnePlus’s founder is almost here

The Nothing Phone, created by OnePlus founder Carl Pei, has an official launch date of July 12th — though the phone’s price and other specifics are mostly still under wraps.

Look, I root for the little guy as much as anyone, and I really do hope this phone brings something new and spectacular into the Android universe. But, well…

Thus far, most everything we’ve seen about the Nothing Phone suggests it’s a lot of hype with little actual substance.

Pei is known for his over-the-top, aggressive marketing. It worked early on with OnePlus. Maybe it’s just me, but it’s starting to get a little tiresome now.

Most actual elements of the Nothing Phone, like its much-ballyhooed custom launcher, haven’t looked like much once we’ve seen ’em for ourselves.

You can check out the Nothing Launcher for yourself in the Play Store and get a taste of the superficial-feeling nature of the Nothing story in this recent preview.

While we’re on the subject of Quick Settings, here’s a handy little possibility that’s all too easy to overlook:

In addition to tapping any item in your phone’s Quick Settings section, you can long-press on lots of tiles to perform different actions.

So don’t let yourself stop with tapping. Press and hold, too, and you’ll find new ways to skip steps and save time getting where you want to go.

Google’s announced a hilariously convoluted plan to merge its two video messaging apps into a single two-headed beast. Brace yourself…

The good news here is that no significant features should be lost with this change. But, well, get ready to explain this to your friends and family:

This official Google overview has all the ins and out of what’s changing, while this interview-driven news story offers up some insight into the (alleged) thinking behind this shift.

Assistant may soon get better at understanding you

Newly revealed signs suggest Google’s got big things cookin’ up for Assistant and its ability to correctly interpret what you’re saying.

For all the advancements we’ve seen with Assistant over the years, voice recognition in general can still be maddeningly hit and miss in accuracy. But there may be hope yet:

You can find all there is to know about this under-development improvement in this code-sleuthing report.

The Pixel 7 is popping up all over the place

Google’s next flagship Pixel phone isn’t expected to land until sometime this fall, but apparent prototypes of the upcoming device seem to be splashing down everywhere all of a sudden.

In an eyebrow-raising series of surprises, someone seems to have gotten their mitts on early versions of both the Pixel 7 and Pixel 7 Pro and put ’em up for sale on different online marketplaces.

The info and photos from the since-deleted Pixel 7 eBay listing are all on this page. The strange saga of the Pixel 7 Pro, meanwhile, is here.

If there’s one tech-related topic that’s universally important, no matter who you are or what flavor of Android you’re using, it’s the topic of privacy and security.

And yet, most people are wasting their time, energy, and precious device resources on all the wrong Android privacy and security apps.

The privacy and security apps that matter are the ones that improve the way your data is protected and provide extra tools for making sure your most important info never falls into the wrong hands.

Speaking of shortcuts, the Drive desktop website is in the midst of getting an under-the-hood upgrade that introduces a couple of nifty new shortcuts.

Anytime you’re accessing Drive on the web from a computer, keep the following new possibilities in mind:

It’s a simple-seeming change and one that’s definitely overdue, but if you juggle as many Drive-dwelling files as I do, it should make a heck of a difference in your day-to-day life.