The launch of this research report marks exactly one year until the death of Windows 7. On the 14th of January 2020, Microsoft will officially end support for its nine-year-old operating system and stop providing vital security updates and patches to the thousands of organizations around the globe still running the outdated OS. 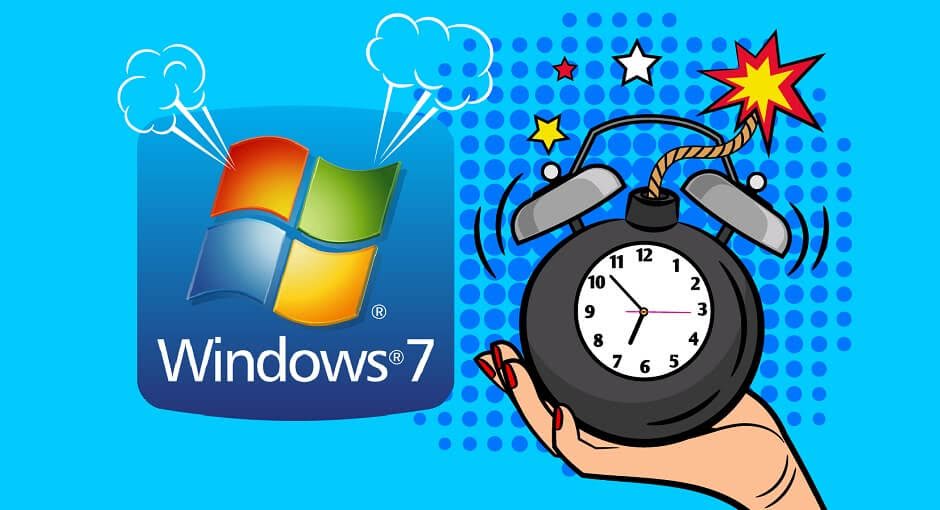 While Microsoft has announced that it will offer an extended support package for the largest organizations, this support will come at a price. Learn what it could cost your organization with our Death of Windows 7 Calculator.

Back in 2014, when Microsoft ended support for Windows XP, the cost of support for an organization with 10,000+ Windows machines levelled out at just under $2,000,000 a year. By failing to upgrade their systems in time, enterprises will end up paying millions in order to remain on an outdated – and increasingly ineffective – IT infrastructure.

One of the key concerns for businesses is the introduction of ‘as a service’ updates. Windows as a Service will mean that IT managers must update their operating systems far more regularly, rather than waiting for a mass migration once every few years. This means more testing, more roll outs, and ultimately, more opportunities for systems to fall out of date, opening enterprises up to massive exposure.

So just what can enterprises do to prepare themselves for this threat? And just how far are they through their transitions to Windows 10? These are the questions that this report sets out to answer. By surveying over 260 US and UK enterprise IT professionals, The Death of Windows 7 provides a comprehensive on-the-ground view of the current state of Windows migration and software delivery.

Following the slow progress of the Windows XP migration in 2014, Microsoft has significantly streamlined its OS to ensure an easier migration process with less disruption and fewer apps failing to migrate.

For large enterprises however, updating hundreds or even thousands of machines around the world can still represent a major challenge. As a result, as many as 43% of enterprises are still running Windows 7 on at least some of their machines. Interestingly, this drops to only 33% for the largest organizations (those with 100,000+ machines). Still, given that it took some companies as long as three years to fully transition from Windows XP, this represents a major hurdle.

The State of Migration

While many enterprises are still running Windows 7, this is not to say that their IT teams have not started the migration process. Unfortunately, our research suggests that there is a long way to go if these businesses are going to be ready in time for the January 2020 deadline.

As it stands, more than a quarter of businesses (29 percent) are barely a third of the way through their migration process. This is despite Microsoft announcing it would discontinue support for the OS nearly four years ago – giving IT departments a significant lead time to get their enterprises in order and to move employees over to Windows 10. 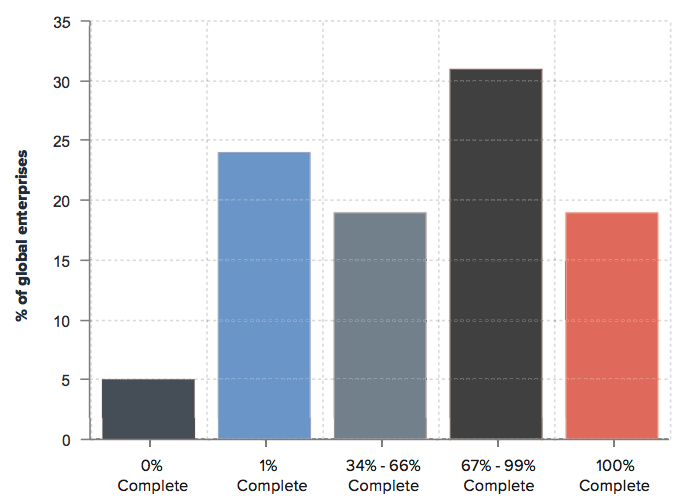 How much of your organization has successfully migrated to Windows 10

36% Unlike the Windows XP migration of 2014, larger international firms seem to be the most prepared. Of the largest enterprises – those with 100,000+ terminals – 36 percent have already completed the move to Windows 10. For the rest, there is still a lot to do and now only 12 months to do it in.

For many enterprises, there remains a worrying lack of awareness around the death of Windows 7. A small number of businesses have not even realized that they only have one year to migrate to Windows 10, let alone started their migration process.

For even more enterprises, there is a lack of awareness around the issue of ‘Windows as a Service’. While many businesses have started their migration to Windows 10, they have not yet realized the implications of this migration to their ongoing update and patching schedule. Of those surveyed, 15% were not aware of this change in the frequency of updates and, as a result, have no plan in place to manage updates at scale and keep their systems secure.

And it’s not just Windows that is shifting to this update model. As more applications move to the cloud, continuous updates will rapidly become the new normal. With this inevitable disruption on the horizon, it’s even more vital that large organizations and those with distributed workforces invest in a software-defined enterprise content delivery network to ensure these updates are delivered in a timely fashion without disrupting business-critical functions.

What is Windows As A Service?

Windows 10 has been described as the ‘last Windows operating system’. This doesn’t mean it’s disappearing, but rather that users will have to regularly and incrementally update instead of migrating to a whole new OS every few years. In short, there will be no Windows 11, 12 or 13 but simply ‘Windows’ as a cloud-based service.

With this new approach comes a number of concerns for enterprise IT teams. As ever more frequent, large OS updates are released, IT teams will have less and less time for testing and distribution. For enterprise IT teams that take 1-2 months to roll out new patches, this represents an enormous backlog of updates, presenting a major security threat and potential entry point for future cyberattacks.

While the majority of businesses are at least somewhat aware of the death of Windows 7, this is not to say that they are adequately prepared for the event. Despite being aware of Windows as a Service, nearly a third of organizations have not yet prepared their infrastructure for the rise in updates.

A large number of IT departments also appear to have deprioritized the move to Windows 10 in favor of investments in big data and cloud computing. Interestingly, despite many businesses needing a software-defined network (SD ECDN) in order to facilitate the distribution of Windows as a Service updates, very few IT professionals see the adoption of an SD ECDN as a priority before 2020.

Following the death of Windows 7, the biggest problem for large enterprises, and those with distributed workforces will be the need to install regular Windows as a Service updates quickly and at scale.

As it stands, 79 percent of businesses don’t install OS updates when they first come through, and 53 percent must wait at least a month before successfully installing vital OS updates across their entire organization. 28 percent of IT teams also say that they find it difficult to distribute software and system updates at scale. If enterprises are going to overcome this issue and keep their systems safe in the age of Windows as a Service, they need to improve their processes and invest in network infrastructure that can support this change.

As businesses prepare for the end of Windows 7 and begin to think about how they will manage the torrent of Windows as a Service updates set to arrive in 2020, there are a number of options available to IT teams.

The first, is to ignore the distribution problem and accept that there will be a significant delay between when patches are released and when they are installed. By simply ignoring the issue, however, enterprises are not only putting off the inevitable, they are actively exposing themselves up to future cyberattacks.

The second option is to rip out and replace their entire network infrastructure. This is not only extremely expensive, but will require significant downtime for large sections of the business. In the long term, it can speed up the delivery of updates, but in the short term, it will cause major disruption and remove budget and resources from more pressing IT issues.

40% of businesses already use a software-defined enterprise content delivery network to stream live internal video. A single additional component could allow distribution of software and updates.

Solve It With Software

By using a software-defined solution, businesses can exponentially decrease the bandwidth load on their networks, without replacing their current hardware infrastructure.

The Software-Defined Enterprise Content Delivery Network (SD ECDN) works through a system of peering, evenly distributing bandwidth to ensure fast delivery of files, OS updates and vital security patches. The greater the number of peers across a complex distributed enterprise, the more efficient content delivery becomes – turning even legacy hardware, into intelligent edge devices. An SD ECDN is particularly efficient in delivering content to remote sites, where a hardware distribution point is too far away to be effective, or there aren’t enough users to justify a dedicated distribution point.

Networks that couldn’t hope to deliver software at scale, can now do so with ease, without interruption to critical business functions. Using the Kollective SD ECDN, your business can increase the speed of software distribution, streamline Windows 10 migration and future proof against Windows as a Service updates. This same technology can even be used to enable mass live streamed video events. This can all be achieved without a costly overhaul to the organization’s IT and network infrastructure.