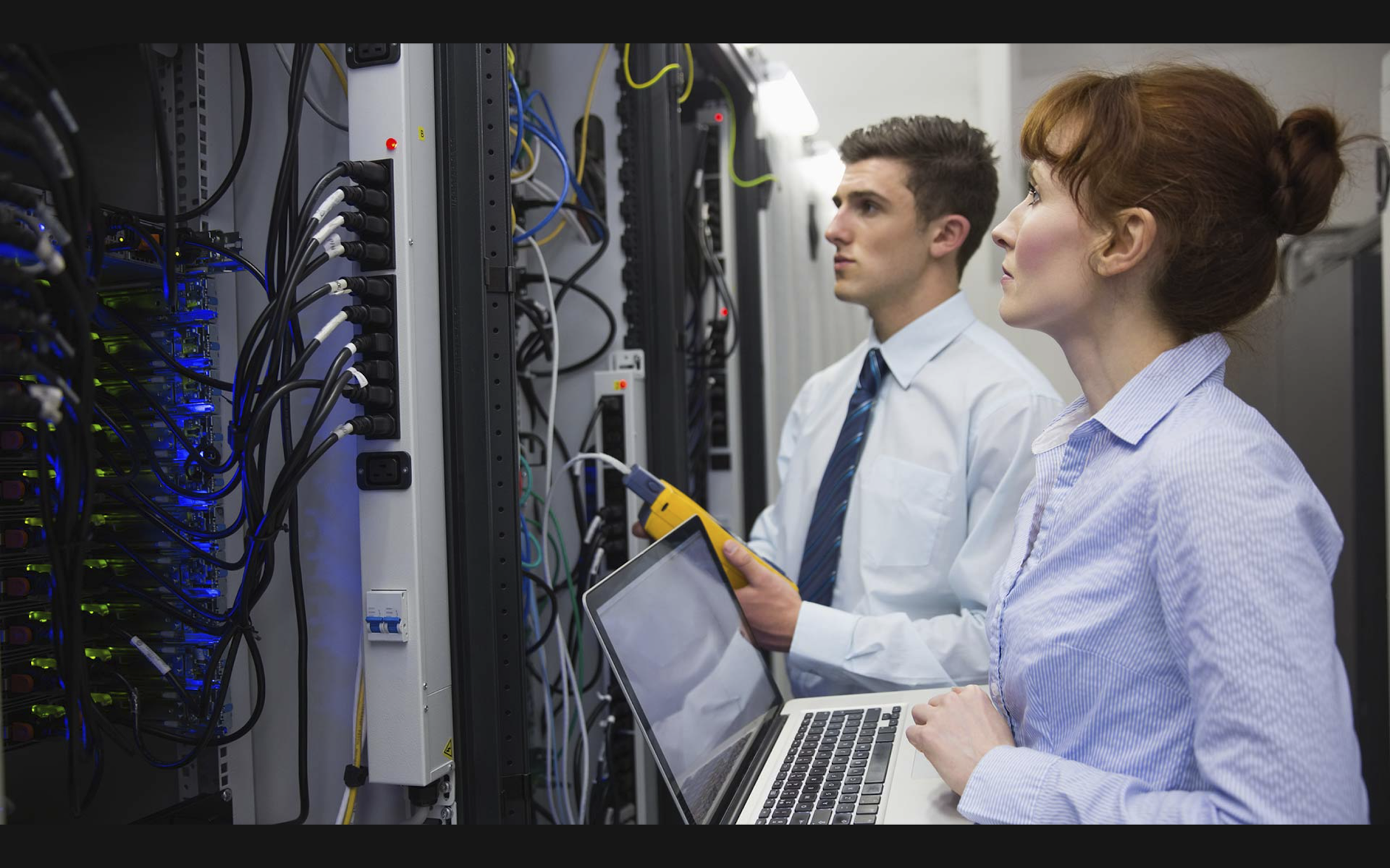 Which of the following is NOT a possible component of Enhanced Interior Gateway Routing Protocol’s
(EIGRP) composite metric?

A. Cost
B. Load
C. Delay
D. Bandwidth
Correct Answer:
A. Cost
Answer Description:
Cost is not a component of EIGRP’s composite metric. The cost, or efficiency, of a path is used as a metric by the Open Shortest Path First (OSPF) routing protocol.

Enhanced IGRP (EIGRP) is Cisco Systems’ proprietary routing protocol. It can use bandwidth, delay, load, reliability, and maximum transmission unit (MTU) to calculate the metric. Of these five metrics, by default, only minimum bandwidth and delay are used to compute the best path.

Which show interfaces command output indicates that the link may not be functional due to a Data Link
layer issue, while the Physical layer is operational?

Ethernet 0/0 is up, line protocol is down

If the problem were at the Data Link layer while the Physical layer is operational, the show interfaces command output will indicate that the interface is up, but the line protocol is down.

In the normal operation mode, when both Physical layer and Data Link layer are up, the show interfaces output will display the following message:

Ethernet0/0 is up, line protocol is up

The message Ethernet 0/0 is down, line protocol is up is not a valid output.

The message Ethernet 0/0 is down, line protocol is down indicates that both the Physical layer and the Data Link layer are down. Therefore, this is an incorrect option.

Which Cisco Internetwork Operating System (IOS) command is used to view the number of Enhanced Interior Gateway Routing Protocol (EIGRP) packets that are sent and received?

The show ip eigrp packets command is incorrect because it is not a valid Cisco IOS commands.

The show ip route command will not display EIGRP packets that are sent and received. It is used to view the routing table. When connectivity problems occur between subnets, this is the logical first command to execute. Routers must have routes to successfully send packets to remote subnets. Using this command is especially relevant when the underlying physical connection to the remote network has been verified as functional, but routing is still not occurring.

The show ip eigrp topology command is incorrect because it does not show the number of packets sent or received. This command displays all successor and feasible successor routes (if they exist) to each network. If you are interested in that information for only a specific destination network, you can specify that as shown in the output below. When you do, the command output displays all possible routes, including those that are not feasible successors: 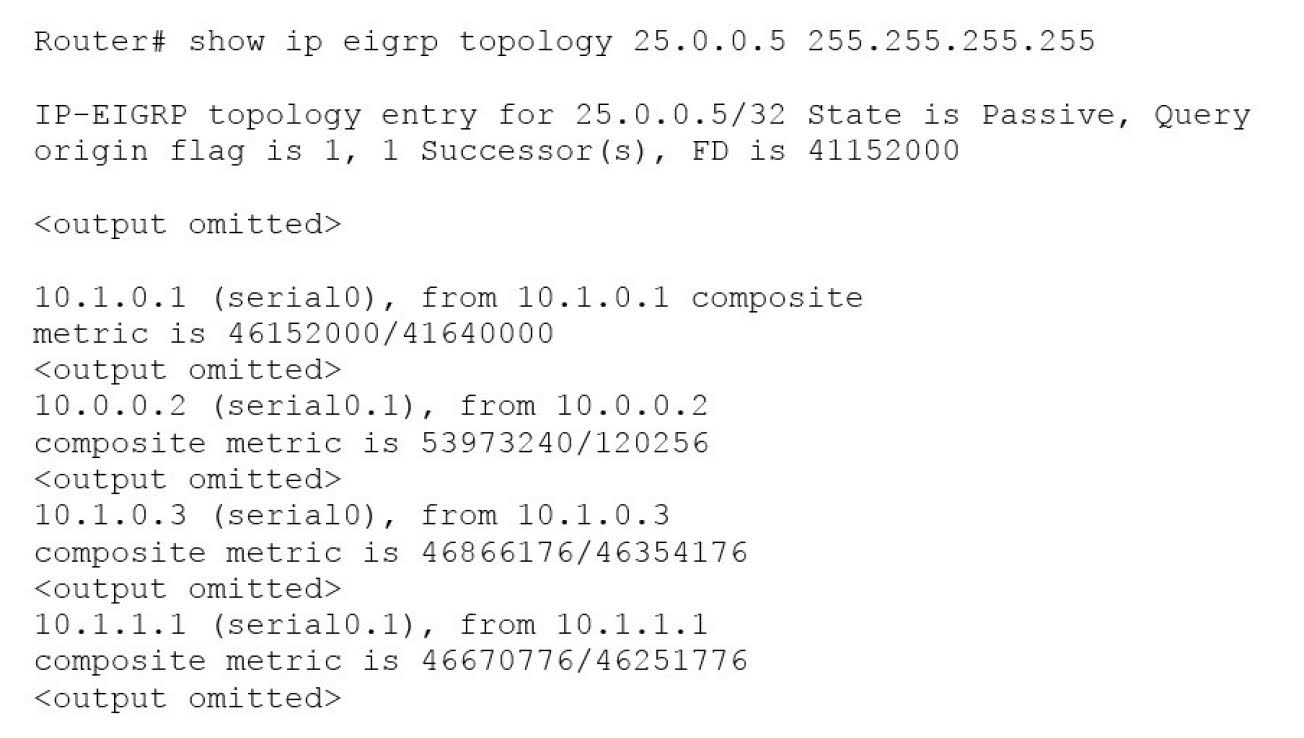 In the above output, four routers are providing a route to the network specified in the command. However, only one of the submitted routes satisfies the feasibility test. This test dictates that to be a feasible successor, the advertised distance of the route must be less than the feasible distance of the current successor route.

The current successor route has a FD of 41152000, as shown in the first section of the output. In the values listed for each of the four submitted routes, the first number is the feasible distance and the second is the advertised distance. Only the route received from 10.0.0.2 (second section) with FD/AD values of 53973240/120256 satisfies this requirement, and thus this route is the only feasible successor route present in the topology table for the network specified in the command.

Which of the following statements is true with regard to SDN?

SDN does not combine the data and control plane. Instead it decouples them.

Which of the following items are NOT required to match for two routers to form an OSPF adjacency?

A. Area IDs
B. Hello/Dead timers
C. Passwords (if OSPF authentication has been configured)
D. Process IDs
Correct Answer:
D. Process IDs
Answer Description:
All of the listed items must match except for the process IDs. The process IDs are locally significant, which keeps multiple instances of OSPF separate on a router, and do not need to match between neighboring routers for the adjacency to form. Process identifiers can be valued from 1 to 65535.

Adjacencies must be formed before routing updates can be exchanged. OSPF routers will form neighbor adjacencies on common subnets if the following three items match:

The show ip ospf interface interface number command can be used to display the state of the DR/BDR election process. 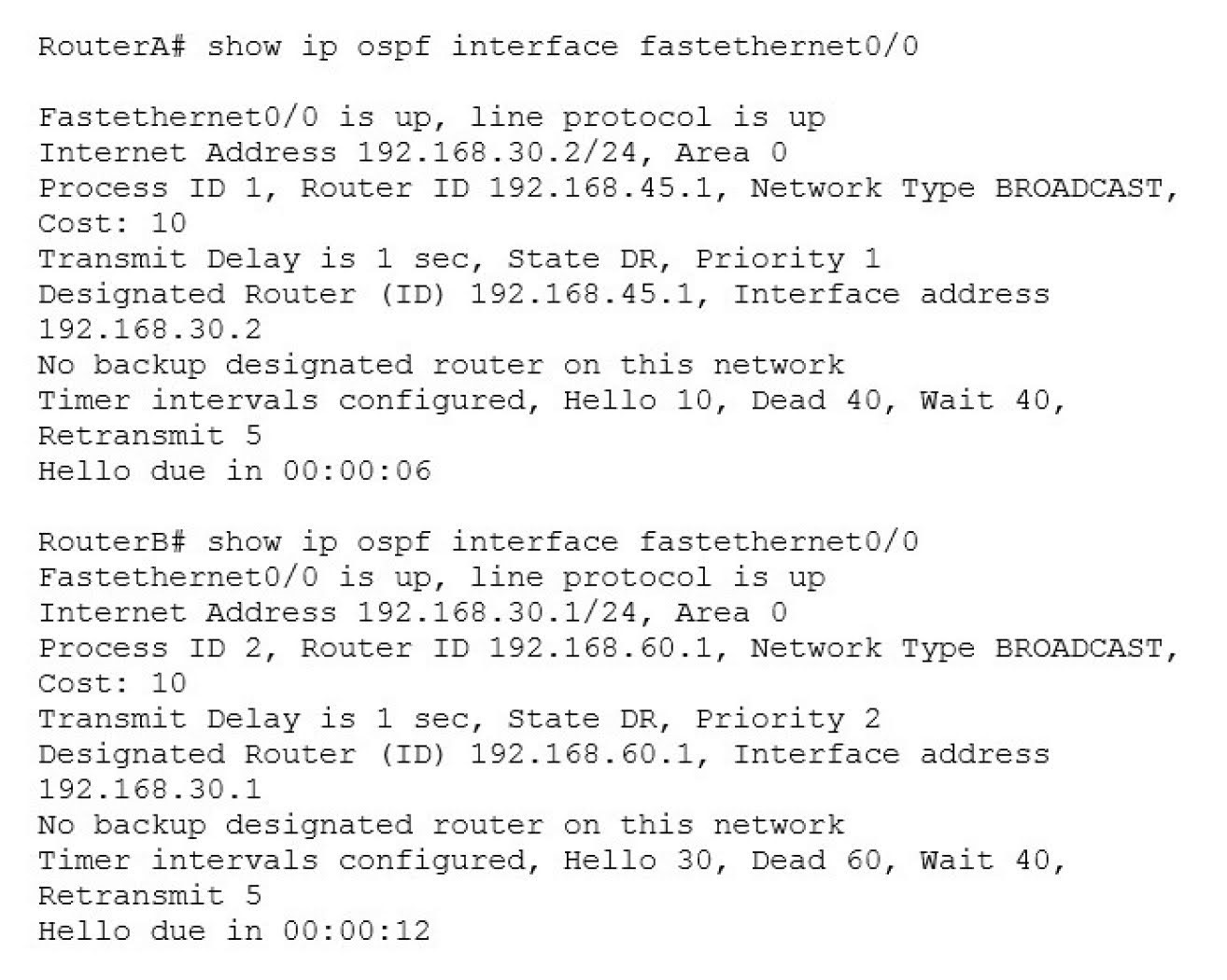 Hellos are used to establish neighbor adjacencies with other routers. On a point-to-point network, hello packets are sent to the multicast address 224.0.0.5, which is also known as the ALLSPFRouters address.

Area IDs have to match for OSPF routers to form an adjacency. Both of these routers have the interface correctly configured in matching Area 0.

You have been assigned a network ID of 172.16.0.0/26. If you utilize the first network resulting from this ID, what would be the last legitimate host address in this subnet?

Which of the following statements are TRUE regarding EIGRP operation? (Choose two.)

A successor is not a backup route. A successor is a primary or active route, and it is stored in both the routing and topology tables.

A feasible successor is not a primary route. It is a backup route, and it is stored only in the topology table.

You recently implemented SNMPv3 to increase the security of your network management system. A partial output of the show run command displays the following output that relates to SNMP:
<output omitted>
snmp-server group TECHS v3 noauth read TECHS write TECHS
Which of the following statements is true of this configuration?

In this case, the keyword noauth in the configuration indicates that no authentication and no encryption are provided. This makes the implementation no more secure than SNMPv1 or SNMPv2.

The following deployment models are available for IPv4 to IPv6 migration:

Link-local addresses are IPv6 unicast addresses that are configured on the interfaces of an IPv6-enabled router. With link-local addresses, the nodes can connect to a network (local link) and communicate with other nodes. In addition, these addresses participate in the neighbor discovery protocol and the stateless auto-configuration process.

The FEC0:0:0:1::1/64 address should not be used for the interfaces because this address is a site-local address. Site-local addresses are IPv6 equivalent addresses to IPv4’s private address classes. These addresses are available only within a site or an intranet, which typically is made of several network links.