Here are some super-handy and all-too-easy-to-overlook ways to do that on your favorite Pixel phone:

If you ever have something you need to transcribe — a lecture, an interview, an important conversation, you name it — stop screwing around with old-fashioned and overly expensive solutions and just let your Pixel do all the heavy lifting for you.

Google has an exceptionally good Pixel-exclusive app that can record any type of audio and transcribe everything said into searchable text as it goes. It’s one of the Pixel’s most powerful and underappreciated features and something that can save you tons of time and frustration.

This one’s available only on the Pixel 2 and higher — sorry, first-gen holdouts — but if you’ve got one of those devices, look in your app drawer to see if an app called Recorder is already there. If you have the Pixel 4 or higher, it should be.

On the Pixel 2- and 3-level models, it’s up to you to go grab it. Just open up this Play Store page from your phone and install the thing, then find its icon to open it up.

The app itself is simple and mostly self-explanatory: You tap the big red record icon at its bottom edge to start a recording, then tap the same area of the screen to stop when you’re done. Be sure to give your recording a title and tap the Save button to save it. You’ll then see the recording on the app’s main screen, where you can play it, read it, edit it, and share both an audio or video version of its recording to anywhere you want. (Just look in the three-dot menu icon after opening a recording to find those options.)

You can also now have the Recorder app automatically sync itself to your Google storage and then allow you to access any of your recordings from the web as well. Once you enable that option within the app’s settings, remember the site recorder.google.com. Pull that up from any computer, and you’ll be able to interact with all your stuff right then and there, just like you can on your phone.

Google Assistant is great for quick actions and hands-free help, but saying “OK Google” or “Hey Google” over and over sure can get tiresome. The Pixel has a better way to handle your spoken requests, though — and if you have a Pixel 4 or higher, it’s ready and waiting for you.

Start by double-checking to make sure the feature is activated on your phone (which it probably won’t be, by default):

Step 2: Tap your profile picture in the upper-right corner, then select Assistant settings.

Step 3: Scroll down until you see the line labeled Continued Conversation.

Step 4: Make sure the toggle next to the word Phone is in the on (blue) position.

Got it? Good. Now, the next time you activate Assistant, remember that you can ask it more questions or follow-ups after its first answer without having to say “OK Google” or “Hey Google” again. It’ll remain active and listening for a full several seconds after every response, and all you’ve gotta do is talk again to command its attention.

(This feature seems to be limited to phones using the “English (United States)” language, by the way, so if you don’t see the option to activate it, try looking at the “Languages & input” option in the System section of your device’s settings. If changing the language there to “English (United States)” won’t be too much of a problem for you, that’ll probably get it working!)

A faster way to find nearby businesses

The next time you’re looking for the number of a business in your area — say, if you’re outside in your car and needing to call for a curbside pickup — save yourself the steps of searching and hopping around from one app to the next and instead just find the number directly in your Pixel Phone app.

Open your Phone app, tap the three-dot menu icon in its upper-right corner, and select “Settings” followed by “Nearby places” to make sure the built-in search function is activated. Then just tap the search box at the top of the app and type in the name of whatever it is you’re trying to find. Doesn’t get much easier than that!

A quicker way to end calls

Ever find yourself finishing a phone call while walking, performing an elaborate tango dance, or unicycling down a busy street? (Hey, I don’t know what kind of crazy hijinks you get up to, you wild ol’ wildebeest.) Even if you’re just doing some ordinary on-the-go activity and want an easier way to disconnect without having to paw at your screen, this next Pixel time-saver is just the thing for you.

It’s a buried option that lets you end any active call simply by pressing your phone’s power button. How ’bout them apples?!

Open up the Accessibility section of your Pixel’s settings and scroll down ’til you see “System controls.” Tap that, then activate the toggle next to “Power button ends call.” (On Pixels running software older than Android 12, that toggle will be on the main Accessibility menu.) And that’s it: When you’re ready to say so long, just press that power button and let out a satisfied “harumph!” for good measure.

A streamlined system for rejection

Let’s be real: More often than not, when a call comes in, the first thing you want to do is reject it. Hey, no need for shame. We’re all antisocial animals at times.

Rather than just decline the call altogether, though — and then be obligated to return a message, if it’s someone important — your Pixel has a nifty system for rejecting an incoming call and simultaneously sending a prewritten message to the caller. It’s an all-in-one, effort-free way to avoid human interaction while still coming across as friendly. What more could you ask for?!

To activate the quick-response system, look for the “Reply” option on the Pixel phone’s incoming call screen. It’ll be beneath the caller’s name and photo (if there is one). And if the call comes in while your screen is on and you’re seeing that pop-up alert instead of the full incoming call screen, press your phone’s physical power button once to jump to the full-screen interface and find the “Reply” command.

That’ll give you a list of stock messages along with the option to write your own custom message on the spot. Pick whatever you want, and let your Pixel handle the art of avoidance for you. 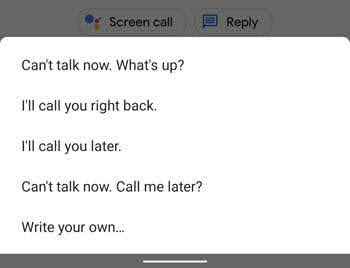 And if the default messages don’t quite seem right for you, open up the Phone app, tap the three-dot menu icon in its upper-right corner, and select “Settings” followed by “Quick responses.” There, you can edit any of the standard options to make ’em say anything you want.

Plan carefully, and you’ll never have to have an awkward conversation again.