Manufacturing firms are eager to transform their networks. What must channel partners know to help them get started? 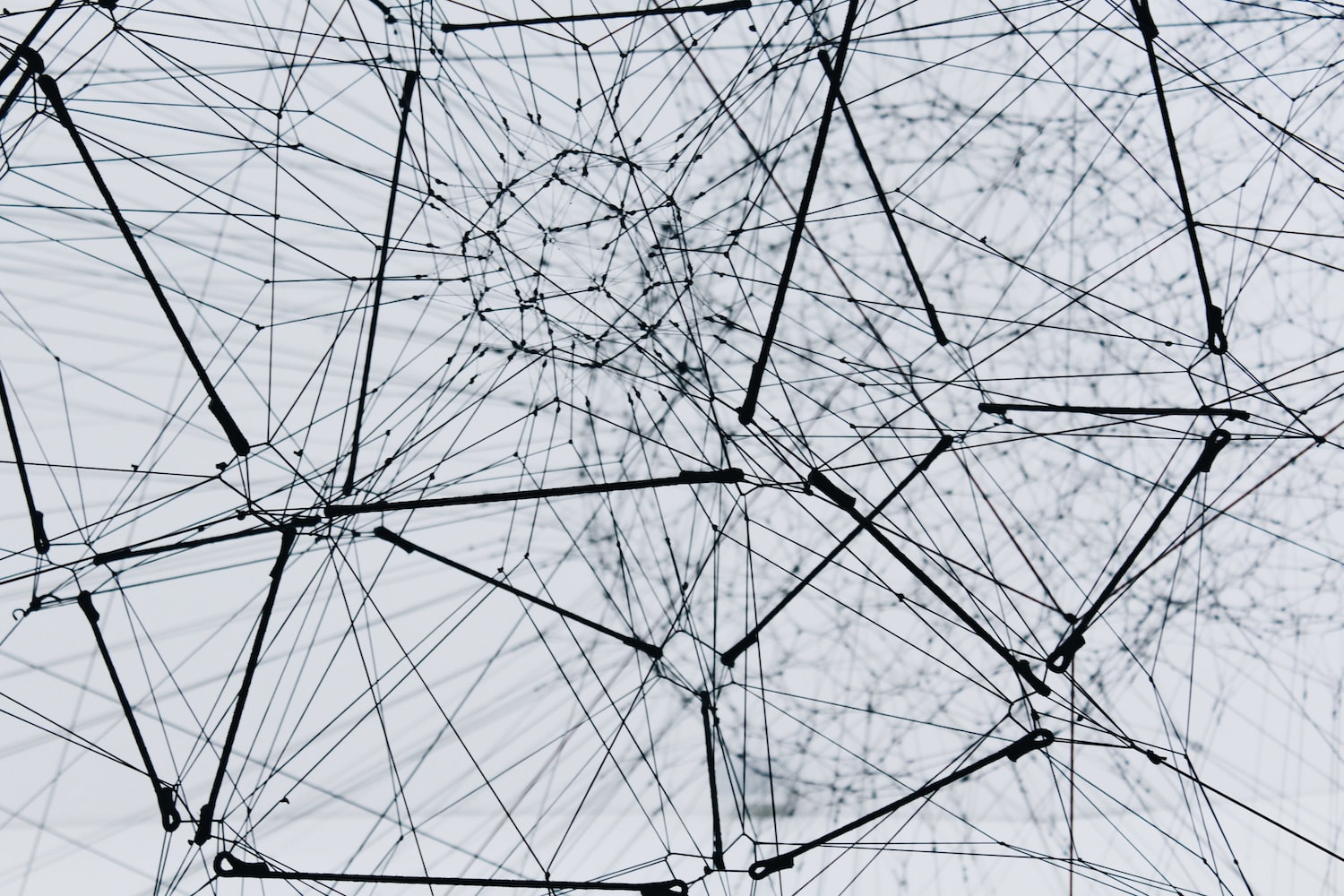 How to Sell and Deliver SD-WAN to Manufacturing Companies?

This begs the question: why is there such polarization around SD-WAN in the manufacturing market? Channel Futures & Channel Partners wanted to take a deeper look at this data. This article explores:

What is it that makes this vertical such an intriguing target for SD-WAN?

The overall economy is beginning to recover from the impact of COVID-19. And as market growth improves, so do the prospects of selling SD-WAN. But those familiar with the SD-WAN market think adoption will play out differently in different verticals.

The manufacturing vertical, for example, exhibits an interesting polarization. SD-WAN is already widely in use and there is tremendous interest in increasing its usage even more. At the same time, however a sizable number of manufacturers don’t use SD-WAN and — for now, at least — don’t plan to. That’s more than any other vertical. So what’s going on?

In this article you will learn about:

The prospects of selling SD-WAN look better and better by the day. After the pandemic severely hampered deployments and significantly slowed market growth, Dell’Oro Group and other research firms see demand rising as the overall economic outlook rises.

“You’re seeing a pretty strong uptick, especially since there was so much uncertainty in the market with budgets,” said Ken Presti, research vice president for Avant Communications’ Research and Analytics division.

But in-depth analysis of the SD-WAN market suggests that adoption will play out differently based on verticals.

Avant earlier this year unveiled its 2021 State of Disruption Report. The report surveyed technology purchasers about their plans to adopt technologies. Moreover, it revealed interesting disparities between the manufacturing industry and other verticals.

We wanted to look deeper at manufacturing. Why do manufacturers seem polarized around SD-WAN?

In this article, we outline the economic and technological trends in the manufacturing industry. We’ll explain what makes the vertical an intriguing target for SD-WAN deployment, and we’ll outline the trends that could inhibit growth. 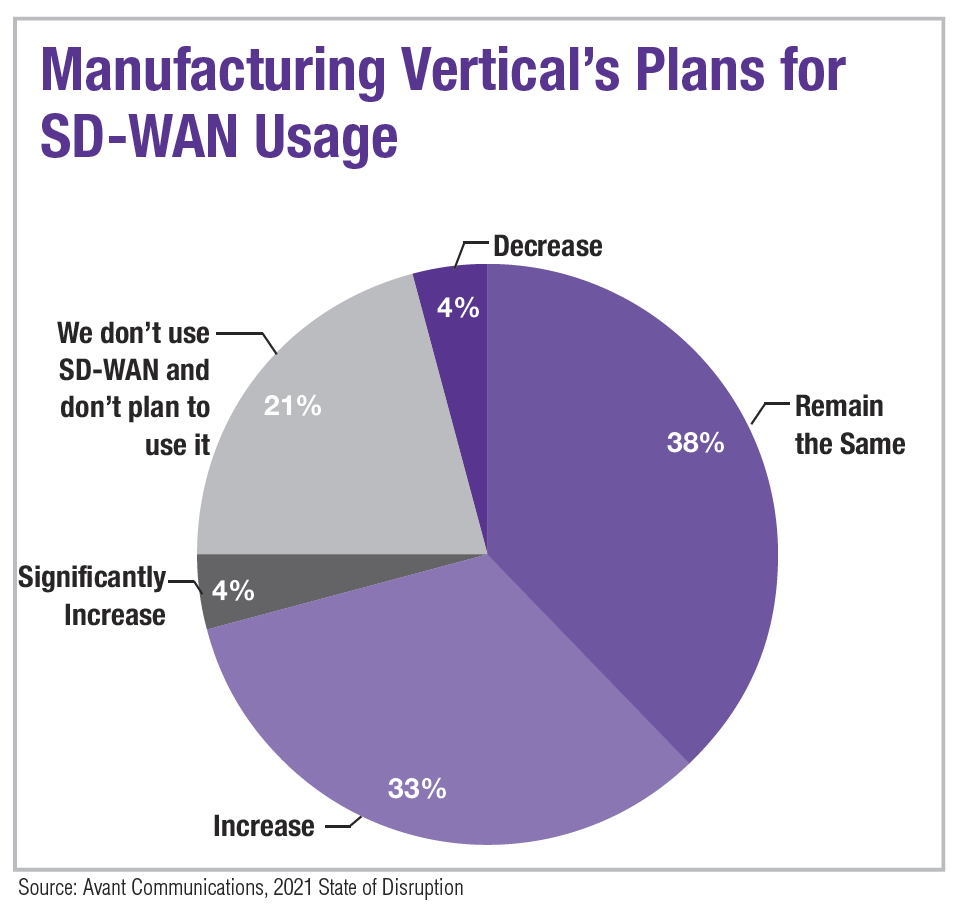 Hope is rising in the manufacturing industry.

The National Association of Manufacturers (NAM) publishes a quarterly survey of the industry, giving 400-500 small, medium-sized and large manufacturers a chance to express how they feel about the future.

If you were asking them a year ago, you’d get a very concerning answer. In May 2020, only 34% of respondents expressed optimism about the future. They hadn’t registered such a low number since 2009, when the Great Recession was still raging. And you couldn’t blame them. Manufacturing activity dropped significantly during 2020 thanks to the COVID-19 pandemic. Shelter-in-place orders had closed manufacturing floors and disrupted supply chains. For some time, there seemed to be no end in sight.

However, the industry is turning the corner. The Institute of Supply Management concluded in its February Manufacturing Report that the industry’s order backlog is its second highest of all time. Manufacturers know they’ll be responding to pent-up demand in 2021. NAM released its Q1 2021 outlook results earlier this month, revealing a highly optimistic industry. Respondents predicted that their sales will increase by 4.9% over the next year. They also expect production, wages and employment to increase. 87.6% of respondents expressed a confident outlook for their future – a massive shift from the 34% that felt confident in May 2020. Moreover, 87.6% is the highest positivity rate since the first quarter of 2019. Manufacturers are expecting growth.

And with growth comes new investment. About 50% of respondents said they’ll be increasing their capital investment plans over the next year.

Fifty-two percent of the manufacturing industry has deployed SD-WAN in some form, according to the latest Omdia survey. The research firm talked to 480 enterprises across 10 different verticals. Although the official number stands at 52%, market penetration is much sparser in reality. Many “adopters” have merely started an SD-WAN pilot or activated a couple of sites.

“A lot of folks are kicking the tires, figuring out where to deploy it and how it works,” said Brian Washburn, Omdia’s practice leader for network transformation and cloud services.

Manufacturing scored slightly lower in SD-WAN adoption than the industry average. Other verticals, like retail, have absolutely gobbled up SD-WAN, viewing it as an opportunity to cut connectivity costs by utilizing public internet. The retail customer uses SD-WAN to tie together inexpensive connectivity pieces together and make them more efficient and reliable.

But Omdia’s study showed that fewer manufacturing companies (16%) see SD-WAN as a way to save money compared to other industries (21%).

“You get kind of a disconnect. It’s not the ideal drop-in solution in the way it is for retail and retail banking,” Washburn said. “It has specific uses, but there’s also cases where it just isn’t a good fit.”

Consider how manufacturers view SD-WAN’s benefits. Manufacturing respondents in the same study characterized SD-WAN as offering less reliability than other industries reported. That’s a problem, especially when we consider the importance of reliability in the manufacturing industry.

“When you’re processing 20,000 widgets an hour, you can’t have something go down for 30 seconds or have a latency that’s more than a certain amount of time. Otherwise, you’re screwing up your widgets and not realizing it until after it has already happened,” Washburn said.

Does SD-WAN provide reliability? Yes. But in many cases, manufacturers have already invested in other technology that ensures reliability. 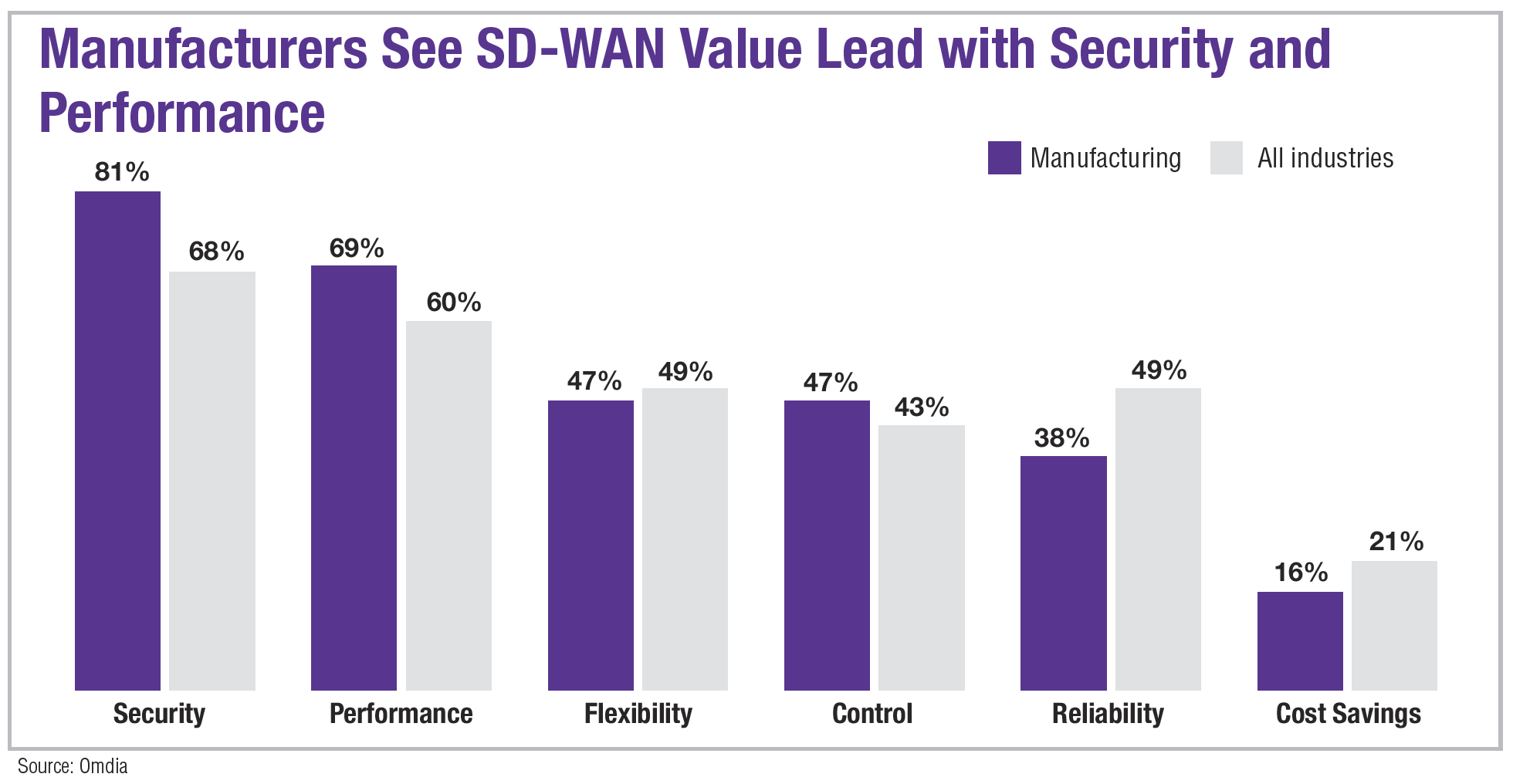 “It’s not that [financial services] is disinterested in SD-WAN security. It’s that they have a very complex security system already built up. So they’re like, ‘We’re good on this; we need SD-WAN for other stuff,’” Washburn said.

Matthew Toth, who founded the Michigan-based consultancy C3 Technology Advisors, does not see the same hesitation in the manufacturing market. He said bureaucracy, rather than specific demands of the market, is inhibiting SD-WAN deployment.

“The slowness of adoption is more when it comes to these massive enterprises where changing anything requires the buy-off of five groups,” Toth said. “But if you’re a midsize manufacturer and your contracts are up, or you’re looking at a refresh, I don’t see a lot of hesitation.”

The typical midsize manufacturer that doesn’t do SD-WAN runs a Cisco router or managed router from a different vendor, according to Toth. But all the routers really do is terminate the circuit.

“It’s essentially a $4,000 device that takes up space in your data center. It’s just not really doing that much. But when that refresh happens, that’s an easy pivot to go to SD-WAN,” Toth said.

“For anyone that goes to another router — it’s essentially IT malpractice at this point,” he said.

Omdia’s Washburn pointed to a two use cases — one good and one bad.

First, an enterprise manufacturer wanted to add SD-WAN to its dual-MPLS circuits. The client required MPLS for its class of services but wanted to use SD-WAN’s dynamic path selection to split traffic between public internet and private WAN. However, SD-WAN ended up playing a redundant role within the MPLS networks.

“They added SD-WAN and then sort of expected, ‘Where are my decreased costs? Where is my increase in performance? Where’s my traffic optimization?’” Washburn said. “You already have all that business logic in your MPLS network.”

Toth, who has championed SD-WAN as a replacement for MPLS, said only the largest enterprises would run dual-MPLS.

For example, one of the larger auto manufacturers runs dual-MPLS but has expressed its interest in migrating away, according to Toth. One complaint is the lack of access diversity.

“Anyone that’s got that is already is looking at their exit strategy,” he said.

But Toth and Omdia’s Washburn agree about the redundancy of running SD-WAN and dual-MPLS.

Avant’s Presti noted that MPLS and SDWAN deployments are both growing, but in different places.

On the positive side, Washburn said the logistics side of manufacturing loves SD-WAN. Businesses that do complex supply chain sourcing and distribution need help managing all the connections, and that’s where SD-WAN comes into play.

“Some of those suppliers or distributors or partners may be internet-attached,” Washburn said. “Some may be directly attached to some sort of direct private network or to an extranet that logs onto the private network. At that point, you’re getting into a lot of supply complexity and a lot of different places to reach. You want to do it securely.”

“There are potentially different levels of prioritization. You just want to make sure the whole mess is managed from the top down in an articulate way that you can understand what’s happening and see that it’s secure and performing.”

Channel partners should take note of the bifurcation in the vertical. One side of the industry focuses on advanced technology processes that enable the manufacturing floor. The other side relies on more manual processes and would benefit from SD-WAN, according to Washburn. One group is emphasizing automation and the other is emphasizing a crafted solution. Washburn said smaller specialty manufacturers would fall into the crafted side that can find a lot of value in SD-WAN.

Although both types may look to SD-WAN solutions, the channel partner should approach them differently based on how the manufacturer does the process.

“The guys doing complex stuff looking to throw money at technology problems are going to see SD-WAN and get one set of things out of it,” Washburn said. “The ones at the low end may see SD-WAN in an entirely different light.”

What should channel partners keep in mind as they sell and deliver SD-WAN to manufacturing companies? C3’s Toth offered several angles.

First, consider the current and future locations of the customer’s applications. Toth recommended identifying the top two or three application owners and learning about their road map. For example, do they plan on moving the ERP application to the cloud?

You must also consider the customer’s security preferences. Do they want to deploy the SD-WAN security in the cloud or on-premises?

In addition, you’ll want to ask the client about M&A. Are they planning on buying other companies and integrating with their networks? If so, are you building the network with flexibility in mind?

“Is it easy to bolt on other acquisitions right into your network?” Toth said.

Take into account mobility as well. Do these devices have 4G on them, or will you need to include a Cradlepoint device?

Fifth, consider delivering a co-managed solution. Toth said vendors have historically held all the control over the solution, but many customers appreciate the ability to check in on the devices and make changes.

Last, speed to delivery matters very much. Toth’s consultancy works with automotive manufacturers that impose tight deadlines. Missing the shipping deadlines can result in a fine — and even a lost contract. “Uptime is of the utmost, utmost importance,” Toth said. “When those guys show up to grab your products and you’re not ready to ship them, that is a really, really big problem.”

Washburn said partners need to consider the customer’s goals. Moreover, they need to keep in mind that SD-WAN is a means to an end. It is a tool that moves customers toward the goal. But this tool needs to interwork with the other components, such as cloud connectivity and bandwidth plans.

“SD-WAN is not the solution. Network transformation is the thing that you’re selling, and SD-WAN is a component of it,” Washburn said.