Within the last decade, transitioning from TDM to IP has no longer become a question of “if” but rather “when.” TDM maintenance costs are rising, regulations are changing, and the additional revenue opportunities unlocked by IP telephony are getting harder to discount. Once the benefits have caught up to the costs, it’ll be time to make the switch. But is that time now? 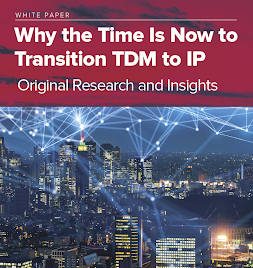 To find out, we conducted an in-depth survey of 102 telecommunications service providers that currently operate TDM networks. Of those surveyed, 55% of respondents maintain networks in North America, 11% in EMEA, 11% in APAC and India, and 23% in the rest of the world. Here’s what we learned.

Within the last decade, transitioning from TDM to IP has no longer become a question of “if” but rather “when.” TDM maintenance costs are rising, regulations are changing, and the additional revenue opportunities unlocked by IP telephony are getting harder to discount. Once the benefits have caught up to the costs, it’ll be time to make the switch. But is that time now?

To find out, we conducted an in-depth survey of 102 telecommunications service providers that currently operate TDM networks. Of those surveyed, 55% of respondents maintain networks in North America, 11% in EMEA, 11% in APAC and India, and 23% in the rest of the world. Here’s what we learned.

According to research conducted by Nemertes, 72% of companies still had TDM infrastructure in place in 2017. Among our own survey respondents, however, that number was 100%.

With this understanding, we then explored whether our respondents viewed replacing their aging TDM infrastructure as an urgent priority.

How High of a Priority Is the Migration?

Across the board, providers confirmed some intent to migrate, although the perceived urgency varied. 97% of respondents had already started thinking about replacing their TDM infrastructure. Additionally, the migration was a “high priority” for the overwhelming majority (73%) of respondents. Among those who said the migration was a high priority, 36% reported that they have immediate plans to replace TDM. The other 64% indicated that they are in the planning stage. 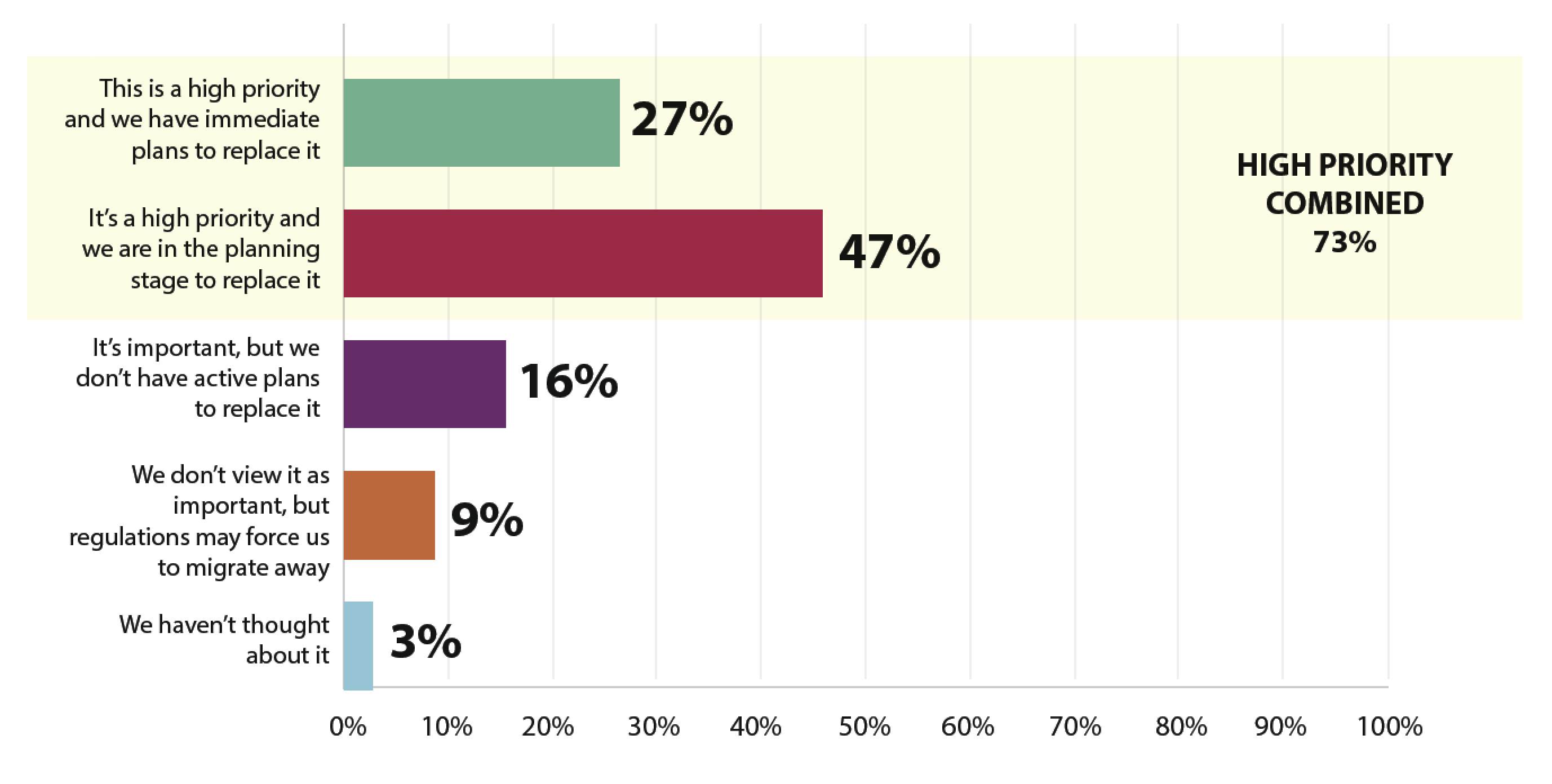 How would you characterize the importance of replacing the TDM infrastructure

What’s the Timeframe for the Migration?

We asked respondents how long they were planning to take to complete the migration. This question teased out a clearer picture of their prioritization.

24% of respondents said they intended to complete the migration within the next 12 months. 43% said it would take between one and three years, and another 25% said it would take them more than three years—placing the hypothetical year of completion at 2022 or even later. In line with the 9% of respondents who didn’t view the migration as especially important, 8% said they weren’t sure what their timeframe would be.

Why Make the Switch?

From an outside perspective, there are many visible reasons to migrate away from TDM. As systems age, qualified technicians for TDM are becoming harder to come by. IT networking is native for the current class of engineers, and TDM specialists are aging out. Security is getting tougher to keep tight, and legacy parts are taking longer to procure, which is increasing the risk of downtime and customer dissatisfaction. But what are the biggest incentives, according to the experts on the ground? We incorporated this question into our survey.

As the primary motivator for the switch, the largest segment of respondents (39%) cited unification of technology around IP for OAM (operations, administration, and management). This makes sense: IP technology is simply more efficient concerning resource use in all parts of the organization. IP-based communication has lower data overhead as well as more options for central management and administration. What’s more, equipment and personnel required to maintain an IP technology-based solution are ubiquitous and relatively inexpensive. Decades-old TDM technology, has or is nearing end-of-life, and the availability of personnel and equipment required to maintain a TDM-based solution is somewhat unpredictable.

The second most frequent answer was cost, cited by 21% of respondents, which was closely followed by service unification and scale, cited by 19%. “Regulatory reasons” and “other” tied for the least significant motivators, with about 10% of respondents citing each.

Considering the implicit cost-savings rolled in, streamlined OAM makes sense as the primary motivator for the migration. Additionally, for the time being, regulations haven’t forced providers’ hands: If anything, in the United States, the Federal Communications Commission (FCC) has tried to help move the transition along by reducing the number of communication requirements.

The Significance of 5G

Another potential motivating factor is the adoption of 5G technology. We asked our survey respondents whether the arrival of mobile 5G networks would affect their plans for TDM modernization. 40% said yes, and it would accelerate the adoption of next-generation technologies. This could explain why a large proportion of our respondents placed their migration time estimate at one to three years: They might be waiting for 5G to time their transition.

At the same time, however, about 60% of respondents aren’t too concerned with the arrival of 5G networking. That’s broken out into two groups: 31% of our respondents said 5G would be a consideration, but not a major factor in their TDM modernization plans, while 28% said they didn’t expect it to affect their plans at all.

IP is the future. That much is clear, as 91% of respondents said that they saw packet-based IP architectures as the primary replacement for TDM. One of the reasons for this overwhelming consensus is the ability to gain complete insight into IP-based network traffic, which is not possible with TDM. Operators using IP-based networks can perform packet analysis on their networks to easily identify trends related to growth in customer need, quickly identify possible QoS issues, improve understanding of resource usage to improve service offerings, and even identify abuse.

In light of the advantages of IP, providers must decide which transport technology is the best replacement for TDM, keeping the right priorities in mind. After all, some clients still require TDM services, so next-generation network solutions should seamlessly offer legacy and new services at scale, reduce network complexity, and provide (new) service velocity.

We asked respondents what the most important characteristic of their TDM modernization technology would be, but they couldn’t keep the answer to only one.

27% of respondents said that, above all, the technology would need to be standards-based and compatible with their existing IP and Ethernet technology. 16% said it needed to be as cost-effective as possible, and 3% said that as the top priority the solution “should be adaptable and programmable.” 50% of respondents, however, said that all three of these characteristics were equally important.

Ethernet and MPLS are the Clear Frontrunners

When we asked which technologies respondents would favor to modernize TDM, MPLS and Ethernet emerged as the leading options. This response was expected, as it’s consistent with the related dialogue over the past decade. 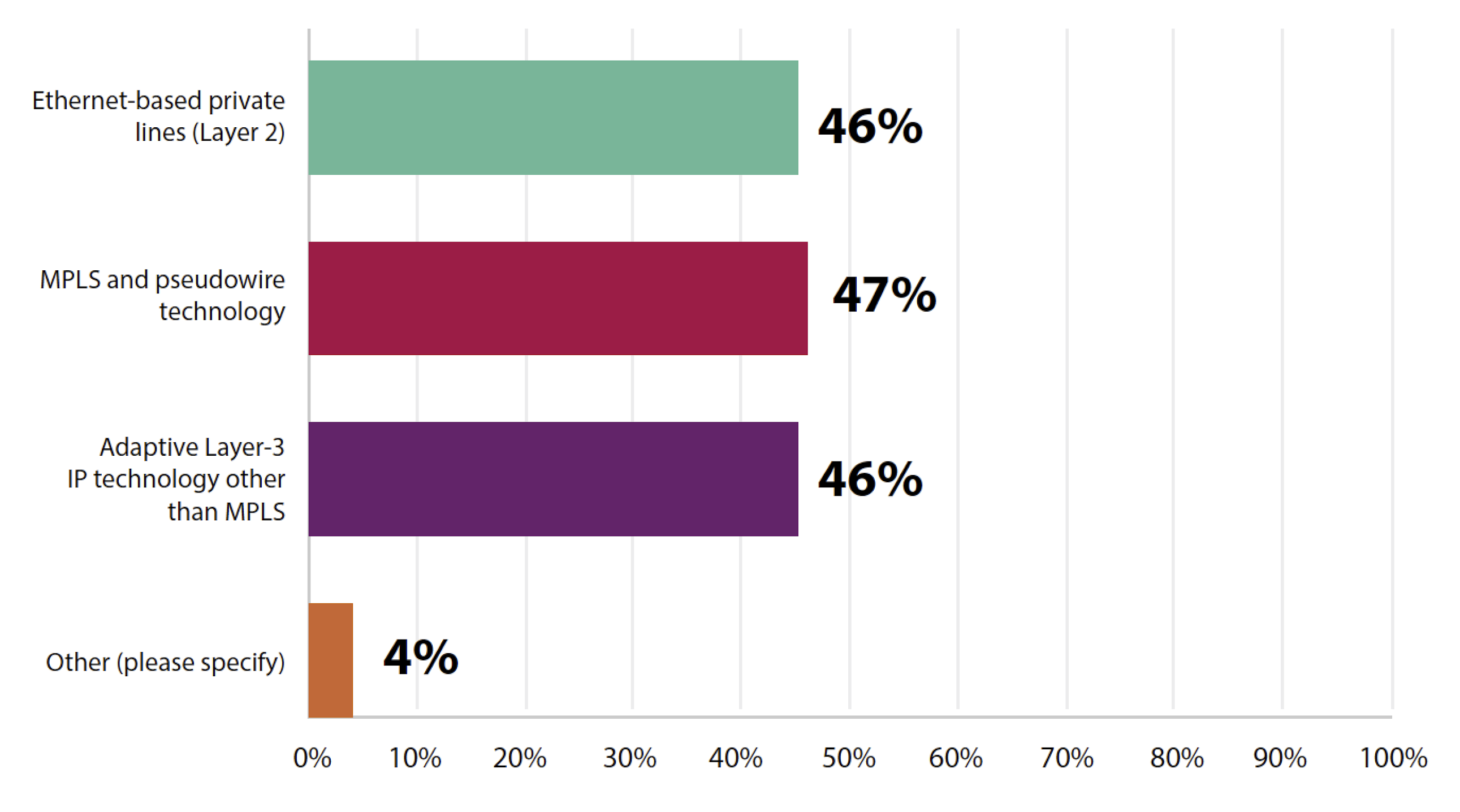 Which technologies do you favor for replacing TDM? (Choose one)

Ethernet: An Opportunity to Offer More

45% percent of respondents said they favored Ethernet-based private lines to replace TDM. This makes sense, as it would make it possible for operators to serve the market for gigabit-broadband connections, provide E-LAN, E-LINE, E-Tree, software-defined wide area networks (SD-WANs), virtualization services, etc. Ethernet fills the gap where multi-application and cost-containment are paramount, especially where large bandwidth is demanded. SD-WAN and other services can be provided, while still remaining a dedicated infrastructure addressing enterprise security and reliability concerns.

MPLS: A Key Part of the Transition

84% of our survey respondents indicated that MPLS would be a part of their transition. An MPLS transition could take place in phases to minimize disruption of existing applications. To accomplish this, operators would first need to add IP-based MPLS routing to their infrastructure; then, using Circuit Emulation (CEM) and Pseudowire Emulation (PWE) technologies they would need to migrate TDM services over to MPLS; in unison, they would remove the legacy infrastructure, move services to a single modern packet-based network, providing a migration to the future for legacy TDM business service, and enabling new opportunities.

The majority consensus is that MPLS will serve as a key part of the transition but not the final architecture. 49% of respondents view CEM/PWE/MPLS technology as an evolutionary technology that they intend to migrate away from over time, compared to 35% who intend to implement it as a primary architecture.

In contrast, only 16% of respondents said that they would like to avoid using MPLS technology. This suggests that avoiding it may be costly or impractical for most service providers.

A Converged Solution for the Near Term

Overall, respondents agree that serving TDM customers while also scaling to accommodate IP traffic will require a flexible solution. Implementing a converged packet network that supports TDM, Ethernet, and IP/packet services would be prudent. In addition, to enable higher capacity, a future-focused network should provide a coherent packet optical foundation, along with Ethernet, MPLS, and IP-based routing capabilities. This would allow providers to continue serving customers today while also laying the groundwork for a fully IP-based network down the line.

Network providers look to increase competitiveness with service velocity by doing more with less, specifically by building an advanced future-ready packet-based network for the next generation of (virtual) services and legacy TDM. After many years of talking, support and migration of legacy services over an advanced packet-based network is now possible. The primary benefits of migrating to a packet-based network are scale and operational simplicity. Packet-based technology offers lower data overhead, more options for centralized administration, and a more reliable stream of resources, which include not only equipment but also qualified personnel. Conversely, maintaining a TDM network is becoming more costly, and prompt, reliable upkeep of the legacy technology can no longer be taken for granted.

As such, service providers see a growing, increasingly urgent need to unify their networking technology around IP. We found that a significant proportion—73% of total respondents—are focusing heavily on the migration, considering it a “high priority.” In fact, almost one-quarter of the respondents have immediate plans to complete the migration within the next 12 months.

In addition to the need to avoid the pitfalls of staying with an aging technology, service providers also see the migration as a major opportunity for growth, profitability, and competitive advantage. The insight and flexibility that IP networks provide, especially the opportunity for packet-level data analysis, is simply not possible with TDM. Thus, the upside of switching to IP-based technology extends far beyond adapting to the obsolescence of TDM: IP networks open up new opportunities for service providers to capitalize on as they work to future-proof and set their organizations up for success.