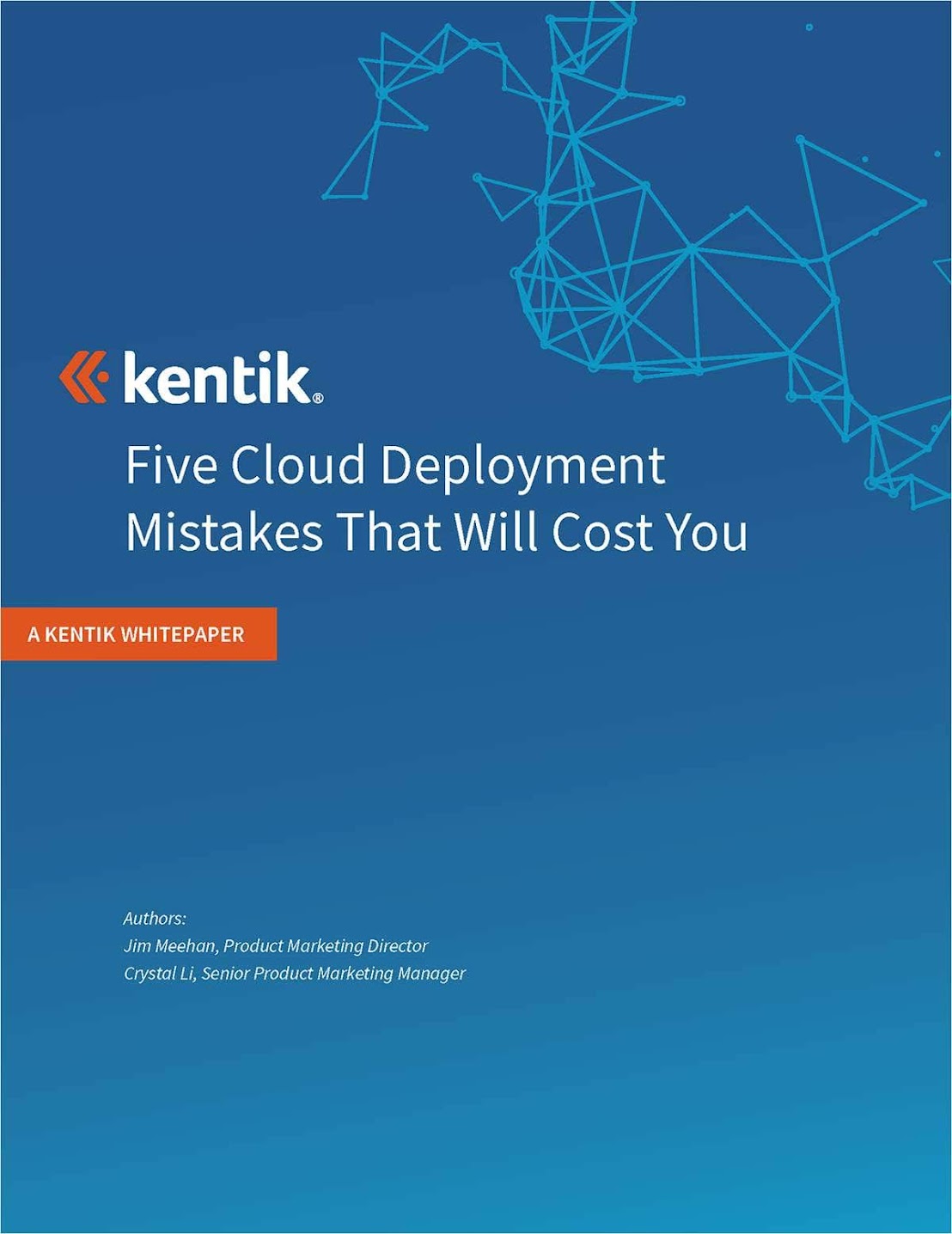 “With lack of visibility into how cloud resources are utilized, it’s easy to make costly mistakes.”

The rapid expansion of cloud-deployed applications is one of the most obvious trends in enterprise technology. The pace of this expansion is no surprise either— cloud technology is laden with benefits and promises. Most often we hear about benefits like “faster,” “lower cost,” “at the speed of business,” “operational efficiency,” “high performance,” “scale rapidly,” and “improved ROI.”

Cloud technology can be complex though, especially when it comes to networking. It’s full of new concepts like VPCs, cloud interconnects, and multiple availability zones and regions. Combined with the rapid pace of deployment and lack of visibility into how cloud resources are being utilized, it’s easy to make costly mistakes.

In this article, we discuss five network-related cloud deployment mistakes that you might not be aware of, but that can negate cloud benefits you’re hoping to achieve. The good news is: There’s always an opportunity to learn from mistakes.

Topics discussed in this article include:

This mistake happens most commonly when multiple, siloed teams jump into the cloud without much thought to shared architecture. Imagine separate teams building separate applications in the cloud. Each team spins up cloud resources such as compute, storage, network components, and so on. Many of them are reusable and shareable. Some of them are obvious standard services like DNS, databases, load-balancers, etc. But we also see duplication of custom-developed microservices that perform the same function. With all the teams running fast in parallel, it’s not hard to see how they may end up repeatedly “reinventing the wheel.” Soon, the cloud environment becomes a tangled web of interdependencies. Without some kind of visibility, negative outcomes are likely, including brittle architecture, wasted development effort, and massive cloud overspend.

The flexibility and agility of cloud infrastructure are great, and individual teams running fast to develop their apps is a true benefit. However, without visibility and processes to discover overlap, software development hygiene suffers and cost and/or reliability failures become much more likely.

What is hair-pinning? It happens when services that should communicate over short, fast, and cheap network paths end up communicating over long, expensive paths with lots of latency. There are multiple causes and flavors of this problem. We’ll discuss two common examples here. 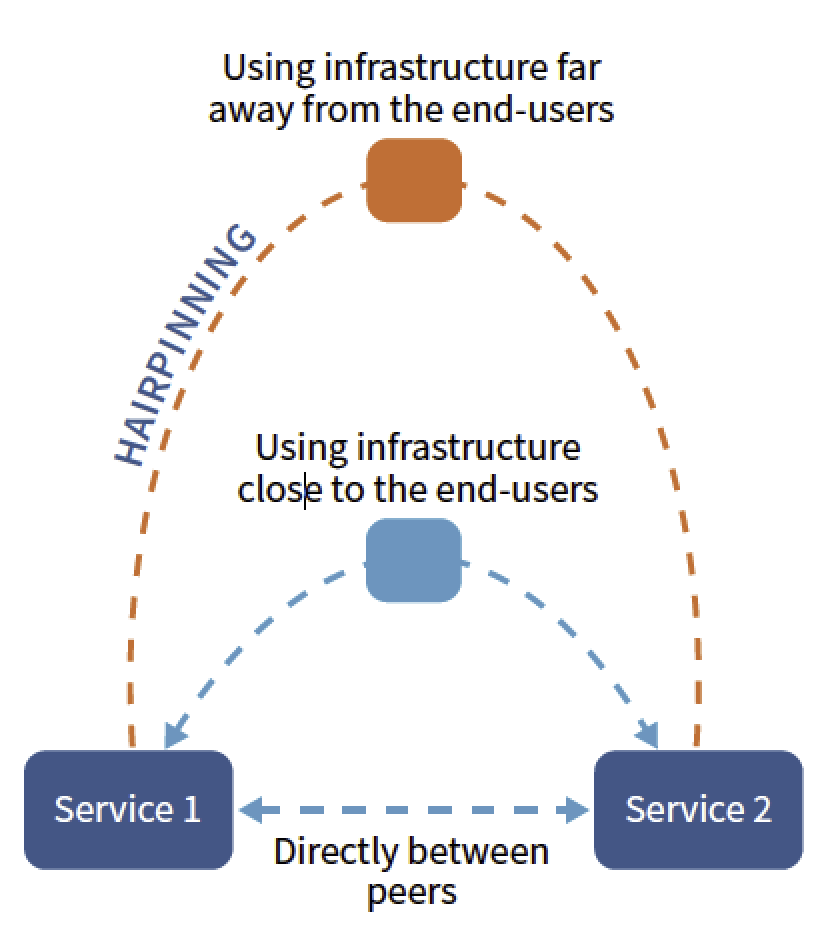 For the second scenario, imagine a service chain consisting of a web front-end, application server, and database backend. A DevOps team has migrated the application server to the cloud, but the web front-end and database are still in the legacy data center. Now every web request results in a chain of calls that traverse cloud interconnect twice, again resulting in poor performance and cost exposure.

It’s a similar story on Google Cloud Platform (GCP), according to the general info on GCP network pricing:

So here’s another mistake we’ve seen many times that drives up cloud bills. Cloud architects and developers build the application or infrastructure in a way that generates significant, unnecessary traffic between regions. It’s easy to do when you’re unaware of the associated costs.

People often assume a certain amount of “cloud magic” — i.e. that it’s pre-configured to achieve a supreme level of efficiency. There’s a kernel of truth in this because cloud providers do consolidate hardware layers to operate at a massive scale that brings down the cost. However, higher up in the stack, when we think about building apps and services, proper configuration and optimization still depend mostly on the end-user.

Cloud resources may be limitless, but they’re not free. Without knowledge of cost and the visibility to see how resources are utilized, it’s easy to forget about optimization, or even overlook very basic configuration steps that lead to significant cost exposure. For example:

Understanding the network behavior of cloud services makes it easy to find these mistakes and opportunities.

Using your cloud provider’s default internet egress is easy, but the costs can add up quickly, especially when your business needs to deliver tons of bits. Costs can be more than 10 times as expensive as traditional IP transit on a per-GB basis. Without considering and implementing other traffic delivery options, cloud migrations can result in a huge billing surprise.

A simple first step is to inventory which applications are delivering traffic to the internet, and how much. Teams may deploy new apps using default internet egress simply because they aren’t aware of the cost impact. Discovery becomes critical for cost control.

Some traffic delivery options that can reduce internet egress charges:

With physical network infrastructure abstracted away in the cloud, it’s easy to think that networks are always fast, reliable, limitless, and cheap. This fallacy is one of the biggest drivers of cloud deployment mistakes. Cloud deployments at scale are hugely complex. Without pervasive visibility, it becomes impossible to uncover mistakes that lead to poor performance and reliability, unnecessary spend, and ultimately, failed projects.