We will be updating the Teams meeting roster (viewable on the Teams Rooms console) to closely align with the current experience available on the Teams desktop application. This will provide new capabilities such as, participant grouping for instructed meetings, sorting roster by raised hand, an integrated user search and the ability to ask others to join meetings from an invite or from chat.

In addition to this, we will be making the roster position on the console better align with that of the Teams desktop application while adding a touch friendly interface for participant options. Users will also benefit from a unified universal bar that will provide in meeting call controls for presenters and attendees for Teams meetings, large meetings support, and Live events (presenter only).

This robust Teams meeting update will also bring chat bubbles, Live reactions for meeting participants and lock meeting support for organizers. To help create an immersive experience for hybrid meetings, we will be making a major update to the front of room display experience to make it more dynamic, including splitting video participants across two in room displays. This is rolling out on Microsoft Teams Rooms on Windows only. This message is associated with Microsoft 365 Roadmap ID:

The updated meeting roster (viewable on the Teams Rooms console) more closely aligns with the experience available through the Teams desktop app, and includes capabilities like participant grouping, sort roster by raised hand, integrated user search. As well as with ability to ask others to join meeting from invited list or from chat.

Ability to view chats sent during a Teams meeting on the front of room display in a Teams Room, calling attention to the chat conversation happening alongside the meeting.

Conference room video fits to frame by default and provide a full view of the room on Teams desktop app. Users can choose to fill frame for room video as needed.

Ability for a Teams Room on Windows to join a large meeting as a presenter or attendee. Based on the role assumed by the Teams Room, appropriate meeting controls are made available to presenters for meeting moderation and for attendees.

Ability to lock a meeting, preventing additional participants from joining. Users attempting to join a locked meeting will be informed that the meeting is locked.

Ability to view live reactions sent by participants in a Teams meeting on the front of room display in a Teams Room. Room users can also send reaction from center of the room console.

Ability to pin multiple video streams (up to 9 participants) simultaneously during a Teams meeting. User can select which participants to pin from the center of room console.

Ability for presenter mode views to appear on the front of room display in a Teams Room. Presenter mode is a feature in PowerPoint Live that helps you customize how your video feed and content appear to the meeting audience.

Ability to split the video gallery across all available displays in a Teams Room, when content isn’t being shared, maximizing screen space and bringing greater attention to the people joining remotely.

Ability to Spotlight multiple video streams (up to 7 participants) simultaneously during a Teams meeting. Users can select which participants to pin from the center of room console.

Rollout will begin in late September and should be complete by mid-October.

Users using Microsoft Teams Rooms will experience a slightly different yet familiar update to in the meeting experience. 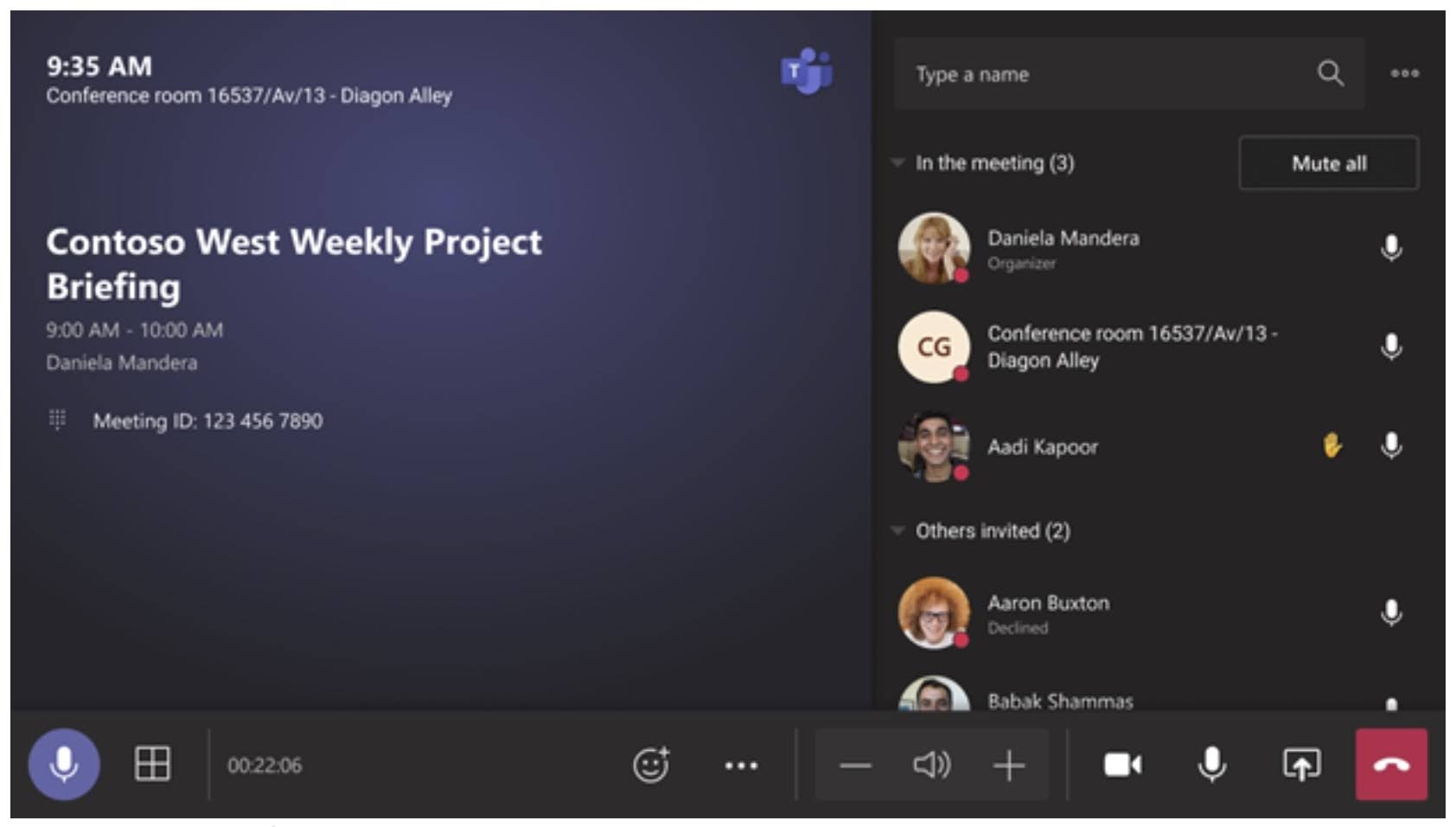 Users will be able to tap on a participant to reveal all meeting controls/ settings available for the participant, depending on their role. 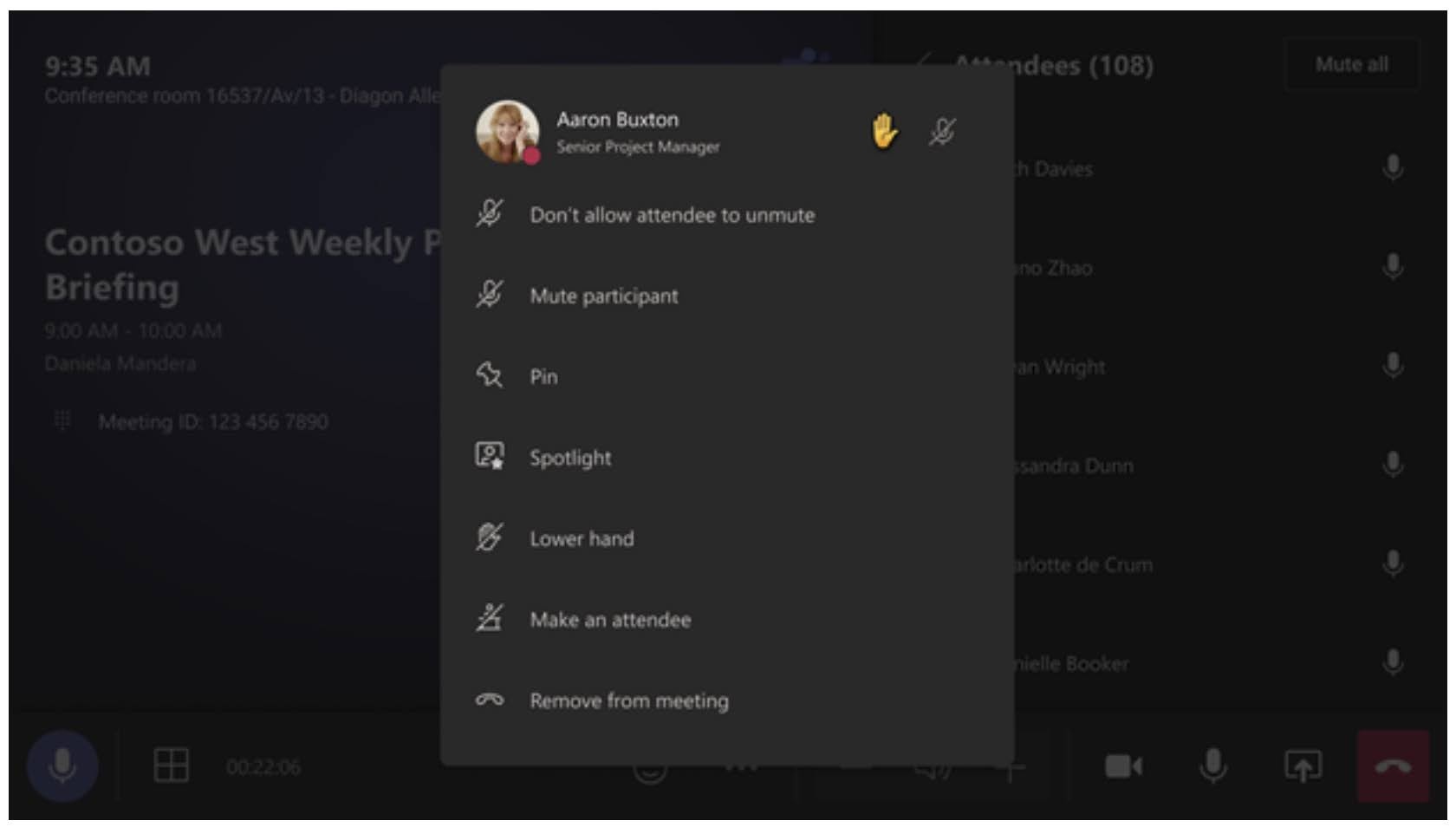 Front of room experience will look more familiar to that in desktop and better with local layouts and video participants splitting across both front of room displays for rooms configured with dual displays.

You might want to notify your users about this updated experience and update your training and documentation as appropriate.