A recent global survey of 900 senior IT decision makers showed a major expectation gap between what IT managers hoped the public cloud would do for their organization and what actually transpired. 91% of respondents believed by moving to the cloud it would simplify operations and provide greater insight into their data. Respondents who felt like the promise of the public cloud hadn’t been realized, attributed it to their data being fragmented in and across public clouds, making it nearly impossible to manage long term. 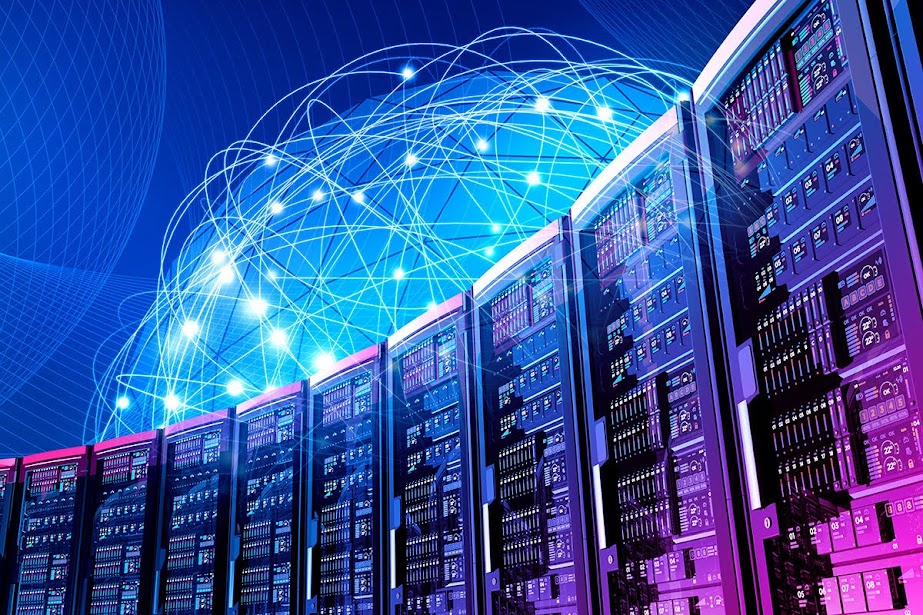 Learn more about the survey and the factors contributing to mass data fragmentation in the public cloud. In this global market study of 900 IT decision makers, you’ll learn:

Read on this article for the latest information on mass data fragmentation.

Data fragmentation is a major inhibitor to IT effectiveness in both the data center and the cloud. This article on mass data fragmentation focuses on the public cloud, and the gap between expectations and reality when it comes to cloud adoption. The consequences for organizations who don’t take proactive steps to manage their cloud based data could be harsh—not just for IT, but for the overall business.

Introduction
Key Findings
Public Cloud Hasn’t Delivered All its Expected Benefits
A Major Cause is Mass Data Fragmentation in the Cloud
The Consequences are Serious for Business, not just IT
IT is Struggling to Meet Senior Management Expectations
Current IT Resourcing Levels Aren’t Enough
There’s a Significant Upside if the Problem can be Addressed
Conclusion
Methodology

This market study is the second in a series examining the issue of mass data fragmentation — the proliferation of data across different locations, infrastructure silos and management systems that has become a growing impediment to IT effectiveness.

The first report explored the scope of the mass data fragmentation problem and uncovered major issues ranging from budget overruns and compliance risks, to falling team morale, and service levels. This second report focuses on a particular aspect of this problem that we think deserves special attention: the public cloud.

While there’s no doubt that public cloud services offer many valuable benefits and are now a fixture of the IT landscape, our report reveals that the rush to migrate to the cloud has created an expectation gap between senior management (who often instigated the push to migrate) and the IT teams’ ability to deliver the anticipated benefits.

In addition to their on-premises complexity, IT teams now have to deal with a new collection of data silos being created in multiple clouds with almost no visibility or governance of the data’s content or location. Not only is this causing predictable operational issues in terms of budget, time and resources, it also represents a potentially serious business risk in an era of tougher regulatory standards such as GDPR and security threats such as ransomware.

On a more positive note, respondents to our survey strongly confirmed there is potentially a big upside for both IT and the business if a solution to mass data fragmentation in the public cloud could be found.

By shining a light on this issue, we hope you will be motivated to examine your own cloud adoption journey, and determine whether you have solutions in place that ensure you can reap the benefits of the public cloud without incurring the risks that await the unprepared.

Respondents had high hopes their organization would be able to dramatically simplify their operations (95%), provide agility (91%), save money (92%) and provide more insights into their data (91%). 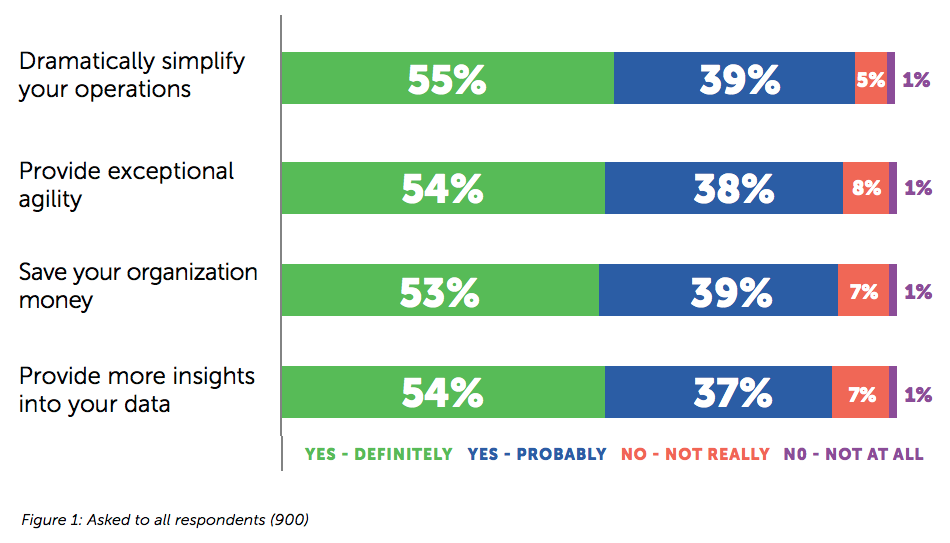 Promise of the public cloud

However, this promise has not necessarily been realized. Only around a third (32%) of respondents’ organizations have achieved all of the public cloud benefits they expected they would, which leaves the remaining two thirds only achieving some (58%) or a few (10%) of the expected benefits.

The Promise of the Public Cloud

A Major Cause is Mass Data Fragmentation in the Cloud

Data fragmentation isn’t just confined to the legacy data center. IT teams now have to deal with a new collection of data silos being created in multiple clouds for offsite backups, long term archives, second tier storage, test and development systems and analytics pools, with almost no visibility or governance of the data’s content or location.

Average number of copies of the same data created in public cloud environments is 3.

And, just as with the data center, IT teams are using multiple separate vendor solutions or point products to manage their public cloud-based secondary storage and data, adding further administrative overhead and complexity to an already burdened staff.

Average number of separate vendor solutions or point products that are used to manage secondary storage and data across all public clouds is 3.

The Consequences are Serious for Business, not just IT

Business is increasingly reliant on IT for competitive advantage and innovation, not just operational support, and data is the lifeblood asset that feeds every important decision and insight. Not being able to take full advantage of cloud-based data therefore is a major concern for the whole business, not just IT administrators. Respondents who agree that their organization’s inability to take full advantage of data in the public cloud has a negative impact on the business also stated their ability to drive new revenue could be affected by 13.4% on average.

In addition, of this subset, over a third (36%) reported that they worry about security breaches. A similar portion (34%) worry that if their organization cannot reap the full advantages of the public cloud expected by management, IT will be blamed, which could result in budget cuts or job losses in this department.

The biggest impact to the organization

IT is Struggling to Meet Senior Management Expectations

While public clouds undoubtedly oer significant business benefits, there is a temptation for top management to pressure teams to migrate data to the cloud before understanding challenges that IT has to deal with as a result of that migration.

Of the respondents who received a mandate to move to the public cloud, 96% say that their IT teams have concerns about it. Nearly half (49%) are concerned about compliance risks. Costs are also a worry, with 44% reporting concerns that the cost of the public cloud is underestimated, and 42% are concerned with the large costs associated with moving data back on-premises from public cloud environments.

Today IT teams spend over a third of their day (36.6% on average) managing secondary data and apps infrastructure across all public cloud environments. This works out to be around 19 weeks a year, on average. Worse, respondents believe that the time needed to manage this data is going to increase to 6 months of the working year – a serious impact on IT effciency and an indication of the complexity involved in managing cloud-based data without the proper tools.

On average respondents report that in order for their organization to operate like a data-first organization, their IT team would need to expand by over a third (39.59%) and IT budgets would need to increase by nearly half (44.37%).

As an added caution, the cloud service providers should not be viewed as an extra source of assistance in this regard. Nearly 80% of respondents executive teams (wrongly) believe that it is the service provider’s responsibility to protect any data stored in their clouds, when it is actually up to the data owners themselves.

There’s a Significant Upside if the Problem can be Addressed

The benefits that organizations could achieve include being able to more eectively deploy analytics/AI across multiple public clouds for better insights (50%), improved customer experience (47%) and maintaining or increasing brand reputation and trust by reducing the risk of compliance breaches (46%).

Benefits of Removing Data Fragmentation in the Cloud

Our survey revealed a marked gap between expectations and reality when it comes to benefits of public cloud adoption. The cloud has received so much attention — and in many cases, rightfully so — as a touchstone to IT and business transformation that it has become a ‘must do’ initiative in the minds of senior management, but often without a full understanding of implications. However, over two-thirds of respondents reported that only some or a few of the expected benefits have been fully achieved. Over 90% of those who hadn’t experienced the expected benefits pointed to data fragmentation as a root cause of their diffculties.

The task of managing fragmented data within and across multiple public cloud environments has become so onerous that IT teams predict it will take up half their working year by 2020 – time that detracts from more valuable projects that could help drive the business. It’s also a shocking indictment of the legacy data management tools that customers have been using to date.

The consequences for organizations who don’t take more proactive steps to manage their cloud-based data could be severe — not just for IT but for the overall business. In the survey, concerns were raised about the increased risk of security and compliance breaches, downtime/unavailability of data, cost overruns, inferior customer experiences and low developer productivity, all of which are critical issues in the digital age.

But there is a way out of the dilemma: a more modern data management solution that consolidates ineffcient silos, minimizes copies, and reduces compliance risk by providing visibility into the data. Almost nine in ten respondents were optimistic that the promise of the public cloud could be realized with a solution that could solve their mass data fragmentation issues.

Cohesity commissioned independent market research company Vanson Bourne to conduct a quantitative research study into mass data fragmentation, the impact it is having on organizations and the benefits which can be achieved by solving it.

Respondents were from organizations with 1,000 employees or more, from a variety of private or public sectors with a focus on financial services, healthcare, life sciences, media and entertainment, technology and the public sector.

On average, the global annual revenue of respondents’ organizations is $8.72 billion. Interviews were conducted online using a rigorous multi-level screening process to ensure that only suitable candidates were given the opportunity to participate.