The fall edition of the Pwn2Own hacking contest has ended. The contest is focused on the hacking of routers, smartphones, printers, and other smart devices, and this year it was won by DEVCORE, a Chinese pen-testing company. The contest took place across four days. Results for each are here [1, 2, 3, 4], and the final standing is embedded below. DEVCORE won the contest with successful exploits for Sonos One smart speakers, Mikrotik routers, and Canon, HP, and Lexmark printers. Read more: 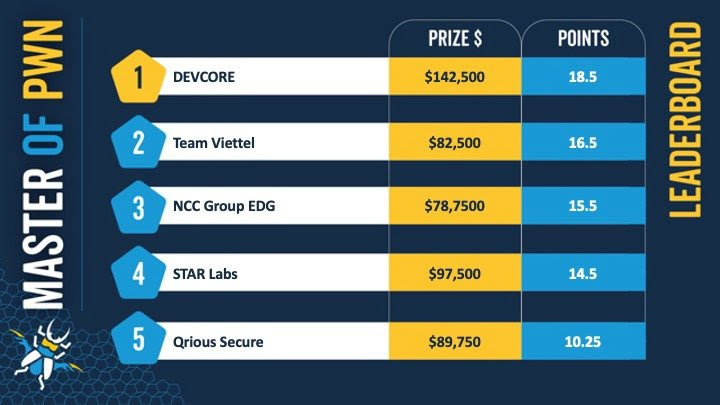 ZDI has published the rules and targets for its Pwn2Own hacking contest that will take place in Miami in mid-February. This is the Pwn2Own contest that’s dedicated to hacking ICS gear. For this edition, the target list includes equipment from the likes of Prosys, PTC, Triangle Microworks, Softing, AVEVA, and Inductive Automation. Read more: PWN2OWN RETURNS TO MIAMI BEACH FOR 2023

The Synactiv team have published their write-up on the vulnerabilities in Canon laser printers they exploited during the Pwn2Own hacking contest last year. The teams also exploited issues in HP and Lexmark printers too, but those write-ups have not yet been published.

The Annual Pwn2Own Hacking Competition 2015 sponsored by HP’s Zero Day Initiative program held in Vancouver, Canada is over and participants from all over the world nabbed $557,500 in bug bounties for 21 critical bugs in top four web browsers as well as Windows OS, Adobe Reader and Adobe Flash.

The latest version of all the four major browsers including Microsoft Internet Explorer, Mozilla Firefox, Google Chrome, and Apple Safari, were compromised by the two security researchers.

Some highlights for Pwn2Own Hacking Competition 2015 as below: