Trustwave has a report recapping some of the IT Army of Ukraine’s recent operations. Read more: Development of the Ukrainian Cyber Counter-Offensive 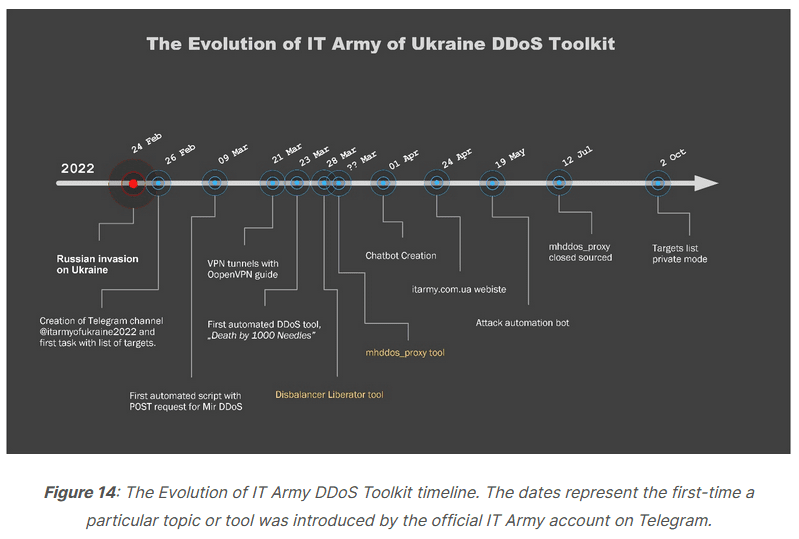 Dutch commando part of IT Army of Ukraine

A report from Dutch newspaper De Volkskrant tells the story of a former Dutch commando member who joined the IT Army of Ukraine and has conducted cyberattacks against Russian targets. Going by the name of Hactic, the Dutch commando took credit, among other things, for hacking Aeroflot, Russia’s largest airline, from where he stole passenger lists and radar positions that he later shared with Ukraine’s SBU service. Read more: Een internationaal cyberleger tegen Rusland met een Nederlander in de hoofdrol

Members of Ukraine’s IT Army hacktivist group have carried out a large-scale DDOS attack against Mir, a popular Russian payment system—currently operating around 130 million payment cards across Russia.

Today we will attack the infrastructure networks of Mir/NSPK. Our goal is to ensure that in Russia there are also interruptions in the processing of payments and in the operation of terminals.

Updated on July 2022: IT Army revelations

Stefan Soesanto, a cyber defense researcher from Switzerland and an expert in the activities of the IT Army of Ukraine [his PDF report here] said on Friday that ITAU members have admitted for the first time that they used a DDoS campaign against one of their targets as a distraction for a data exfiltration operation. The target was Russia’s e-procurement resource platform Roseltorg.

Yesterday, the IT Army acknowleged for the first time that it used a DDoS campaign to run cover for a data exfiltration op. Target: Russia's e-procurement resource platform Roseltorg. pic.twitter.com/U8ZwYjvIDa

Overview: IT Army of Ukraine

Cyber defense researcher Stefan Soesanto has published a comprehensive report [PDF] on the activities of the IT Army of Ukraine; the hacktivist group put together with duct tape by the Ukrainian government shortly after Russia’s invasion. The report deals with how the group selects its targets, gathers data for future operations, how members coordinate, and tools used for the attacks. Read more: Research questions potentially dangerous implications of Ukraine’s IT Army