One of the most interesting APT reports this week came from Proofpoint, which looked at spear-phishing operations from Iranian APT TA453 that deviated from their standard targeting. Lots of interesting stuff in there, like the targeting of travel agencies inside Iran, space programs across the world, women’s rights organizations, and research institutes working on organ replacement. However, the one that caught our eye is highlighted below, and Proofpoint researchers appear to believe this might have been intelligence collection for a potential IRGC on-the-ground espionage operation. Read more: Would’ve, Could’ve, Should’ve…Did: TA453 Refuses to be Bound by Expectations

“Proofpoint observed a Gmail address targeting a Florida-based realtor with a benign conversation and TA453 affiliated web beacon. Open-source research of the realtor identified they were involved in the sale of multiple homes located near the headquarters of US Central Command (CENTCOM) during the phishing campaign. CENTCOM is the US Combatant Command responsible for military operations in the Middle East.” The Human Rights Watch activist group says that two of its staff members have been targeted in a spear-phishing campaign carried out by APT42 (or Charming Kitten), one of Iran’s state-backed cyber-espionage groups. The same campaign also targeted 18 other high-profile activists, journalists, researchers, academics, diplomats, and politicians working on Middle East issues. At least three individuals were compromised, the organization said.

“For the three people whose accounts were known to be compromised, the attackers gained access to their emails, cloud storage drives, calendars, and contacts and also performed a Google Takeout, using a service that exports data from the core and additional services of a Google account.” 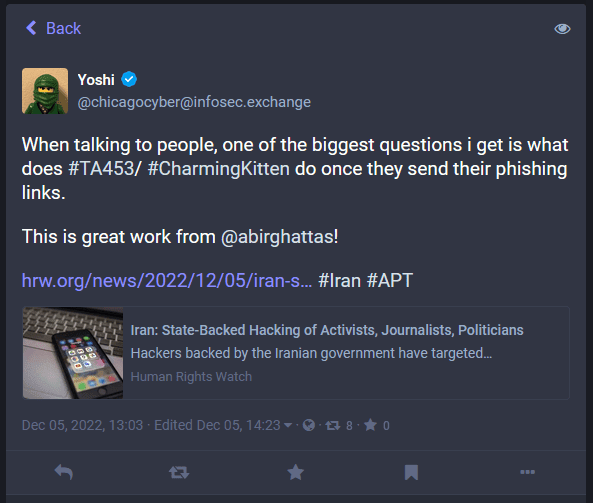 Researchers from CyFirma have published a breakdown of a social engineering attack carried out by the Iranian group TA453. Read more: Advanced Social Engineering Attacks Deconstructed

Three Iranian hackers with ties to the Iranian government, known as Charming Kitten or APT35, have been charged by U.S. authorities.

APT35 attacked hundreds of organizations, including a domestic violence shelter and power companies in the U.S., and others around the world. The hackers broke in and used Microsoft’s encryption tool, BitLocker, against victims’ data. The DOJ says the hackers were seeking financial gain as a side hustle to their main activities supporting the Iranian government, which Secureworks detailed their activities and infrastructure in a lengthy blog post. The Treasury sanctioned the hackers, and the front businesses they worked for, and even the NSA got in on the announcement. See, isn’t it nice when all of government works together nicely?

Updated on May 2022: Iranian APT Group Launching Ransomware Attacks Against US

Over the past several months, Iran-linked cyberespionage group Charming Kitten, aka APT35, Magic Hound, Phosphorus, NewsBeef, Newscaster and TA—453, has been engaging in financially-motivated activities, the SecureWorks Counter Threat Unit (CTU) reports. In December 2021, the group was acquiring exploits that leveraged Log4J vulnerabilities; in January 2022 they were observed using a new PowerShell backdoor and most recently the group has turned to financially motivated attacks including ransomware deployment.

A report from Proofpoint says that state sponsored threat actors have targeted medical researchers in the US and Israel with credential phishing attacks. The campaign began in December 2020. Proofpoint says “the tactics and techniques observed in BadBlood (Proofpoint’s name for the campaign) continue to mirror those used in historic TA453 (aka Charming Kitten) campaigns.”