Innovation in healthcare does not always come in a digital package. It is born in understanding the true cause of problems, observed or experienced, and using this insight to inform and inspire the creation of solutions that are fit for purpose. This understanding of unmet needs is driven by investigating patients’ problems from the outside in and seeing experiences from their perspective, as well as from the perspective of the other stakeholders they interact with. 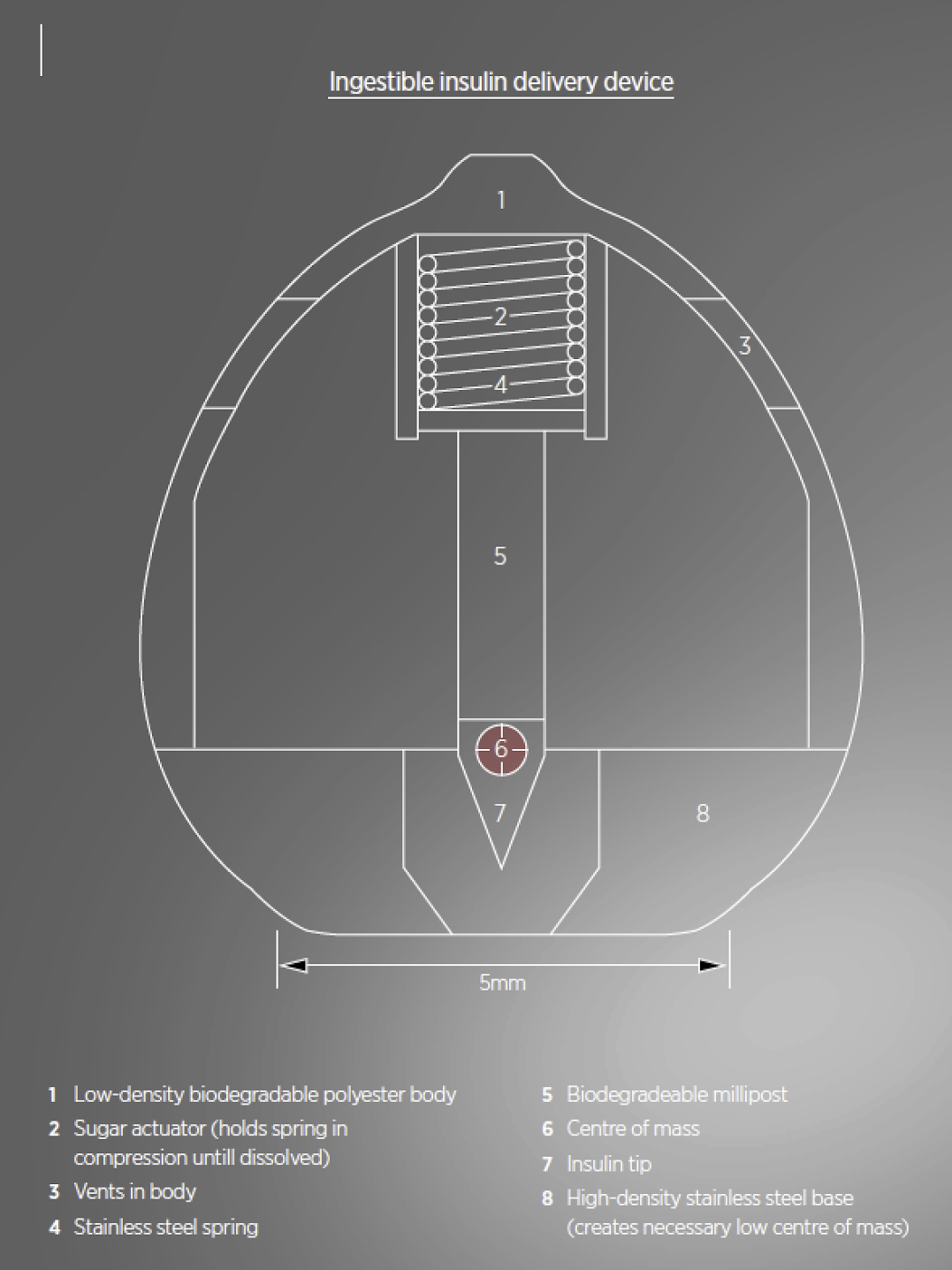 A team at the Massachusetts Institute of Technology (MIT) has done just that. They have found a novel way to solve a major challenge for diabetes patients – delivering insulin without the need for painful and uncomfortable injections. Taking inspiration from the leopard tortoise, the MIT research project, sponsored by Novo Nordisk, is aiming to deliver insulin orally with a pill that releases its medicine in the stomach lining. Dina Patel speaks to Alex Abramson, the lead author of the paper and MIT Chemical Engineering graduate student and Ester Caffarel-Salvador, Postdoctoral Research Associate at MIT.

Why do we need to deliver insulin orally when we can use injections?

ALEX: This device enables the delivery of all biologic drugs, not just insulin. We expect it could be used for nucleic acid delivery, protein, peptide, and antibody delivery. It can transform how we deliver all of these drugs. A lot of companies will kill projects that involve macromolecule drugs requiring injections because they only offer an incremental improvement over an existing small molecule drug. They know people won’t want to take that injection over a pill that works almost as well, these macromolecule drugs which would have required an injection aren’t suitable for the market. We expect a huge amount of the macromolecule drug projects currently being killed by pharmaceutical companies that could benefit from this new technology for oral delivery.

ESTER: We also anticipate that patients will not feel any pain from taking this pill. The gastrointestinal tract does not have pain receptors and, when tested in pigs, we didn’t observe any evidence of discomfort. We’ve looked closely into this and the safety of the device.

What have been the core research findings?

AA: When developing this pill, we created three innovations. The first is the self-righting system. I learned about a great mathematician in Hungary who had done a lot of research on the self-orienting nature of turtles and tortoises. We were inspired by the leopard tortoise – a tortoise found in eastern and southern Africa that can re-orient itself very easily based on its shape. It has a shell with a high, steep dome, allowing it to right itself when it rolls onto its back. Similarly, our pill has a shape close to the leopard tortoiseshell and that makes it easy for it to re-orient itself if it lands in a direction that isn’t facing the stomach tissue wall.

The second breakthrough was the sugar-based trigger, which ensures the pill doesn’t fire in the esophagus when it’s ingested, instead, it always fires in the stomach. The trigger senses the humidity in the gastrointestinal tract and that starts a timer. The sugar begins to dissolve and after about five minutes, it releases a compressed spring which pushes the drug into the tissue.

What was your role in the project?

AA: This has been my main focus for the past couple of years. It’s my thesis project and I helped coordinate the efforts between MIT and Novo Nordisk. My role consisted of developing the idea to make a self-orienting device and working on the amount of force necessary to inject the needle. I was also involved in making the sugar-based hydration mechanism and a solid dose of the needle.

ECS: The research began in August 2015. The lab is a very collaborative environment. We have a multidisciplinary team composed of technical assistants, professors, postdoctoral associates and many undergraduate students that visit for a term, the summer or even the whole year.

Alex and I have different areas of expertise. Alex is a chemical engineer and I am a bio-technologist and biochemist by training – our skills complement each other. I was involved in the formulation aspect of the prototype. I focused on tissue characterization, on researching formulations and on the stability of the drugs. I tested the loading capacity of the device and optimized the analytical methods to quantify insulin. For example, I confirmed the insulin was still active when pressed into the device and ensured the properties didn’t change considering that we are submitting the insulin and other biologics to high pressure during the fabrication process. Initially, this was a three-year collaboration project, but, now that we have this prototype, we have extended the collaboration.

Why does the pill need to be able to turn itself?

AA: When I started working on the project, and was considering how to combine needles and pills, the first thing I did was place small needles around the entire pill. When we dropped that on the tissue, I realized only a quarter of those needles were making contact. The other 75% of the needles were just going to dissolve and not deliver the drug – or even worse, the pill would rotate and allow slightly more needles to enter the tissue causing variability in the dose amount.

This brought up the idea of only putting the needle on one side of the pill. To do that, we needed a pill that oriented in the direction of the tissue wall. This way, we could ensure the needles on one side of the pill were always in contact with the tissue wall. The idea of self-orienting came up and we wondered, what are some things in nature and our environment that self-orient?

How does the self-orienting needlework?

AA: The needle itself is inside a slightly larger capsule – it’s between the size of a pea and a blueberry. The bottom of the device is weighted and so the center of mass is lowered, which makes one configuration of the device the only stable configuration. For example, if you think about a Weeble Wobble toy or one of those punching clowns, whenever you disturb it, it always comes back to its preferred configuration – which is upright. The self-orienting device utilizes a similar concept. It also has another key characteristic, a flat bottom, which ensures once a person takes it and the device has oriented itself towards the tissue wall, if the person were to lean over from side to side or their stomach was to growl, it would stay in the same position.

ECS: The needle is only expelled once triggered by the sugar mechanism. It is protected until the device reaches the desired configuration against the tissue wall of the stomach.

How long does it take for the insulin to be fully released into the bloodstream?

AA: This can vary depending on what excipient we add to the formulation. If it’s made of 100% insulin, then it dissolves for several hours. If you add another excipient that enhances or slows dissolution, the drug uptake profile can change dramatically. We’ve shown that we can use this to deliver insulin for an entire day.

ECS: There are different types of insulin so there is a lot of room for optimization.

What are you planning to do next?

AA: Right now, the research is being tested on large animal models. The one thing we want to look at is the chronic effects of the injection in the gastrointestinal tract. What happens if humans or animals were to take these every day for six months? We want to continue doing a few large animal tests and once we’ve gauged that, we then hope to go to clinical trials with humans in the next three years.