Media companies are well aware of shifting consumption patterns and realize the need for change. However, where to start in the digital journey can be confusing and daunting. A constantly changing digital landscape and shifting audience usage patterns makes it challenging for companies to know where and how to fully commit. 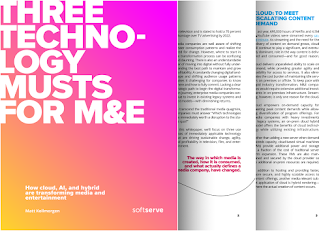 How Cloud, AI and Hybrid Rendering are Transforming Media and Entertainment Industrial

In this article, we’ll focus on three use cases of immediately applicable technology that are driving sustainable change, agility, and profitability in television, film, and entertainment.

Introduction
In with the new
Cloud: To meet escalating content demand
Hybrid Rendering: More power when you need it
An ocean view from the cloud
AI: Smart highlights score big
AI delivers intelligent entertainment
Start now for the future

To futureproof audience share and profitability, while ensuring a sustainable growth model, media companies must move forward with digital journey. Netflix introduced the monthly subscription model in 1999. YouTube was founded in 2005 and was streaming 100M video views per day a year later. Despite 20 years of digital disruption, many media companies still operate with traditional cost models and infrastructure. In doing so, they are at risk of shrinking profitability and market share.

Viewership is moving away from traditional linear programming. Customer dissatisfaction with bloated pricing for largely unused offerings is also a growing concern which has led to well-documented cord cutting by a growing minority of cable and satellite customers. These changes in demand and viewing habits have created a shift in power for coveted advertising revenue.

Social media, user generated content (UGC) on video and podcast channels, over-the-top (OTT) providers, and other digital channels have become established forms of media and proven effective investments for advertisers. Internet advertising already has a $30B lead on television and is slated to hold a 70 percent advantage over TV advertising by 2022.

Media companies are well aware of shifting viewer consumption patterns and realize the need for change. However, where to start in the transformation process can be confusing and daunting. There is also an understandable fear of moving into digital without fully understanding the best path to maintain and grow profitability. A constantly changing digital landscape and shifting audience usage patterns makes it challenging for companies to know where and how to fully commit. Lacking a clear strategic path to begin the digital journey, enterprise media companies continue to invest in existing legacy systems and cost models—with diminishing returns.

To transcend the traditional media quagmire, companies must answer “Which technologies are immediately worth a disruption to the status quo?”

In this article, we’ll focus on three use cases of immediately applicable technology that are driving sustainable change, agility, and profitability in television, film, and entertainment.

The way in which media is created, how it is consumed, and what actually defines a media company, have changed.

In with the new

Live streaming from the cloud is not only increasingly available, but preferable to a growing audience. Viewers want on-demand access to programming favorites, delivered to preferred devices—without paying for unwanted media included in cable or satellite packages. Growing audiences also want selective content not typically scheduled on major networks. This lack of supply to public demand has opened the door to digital-native, cloud streaming disruptors.

As reviewed in our Follow the Money whitepaper, the majority of households (HH) now consume programming via a combination of satellite or cable programming and cloud streamed channels. A growing number of viewers have three or more on-demand subscriptions. Premium channel providers like HBO, Disney, and ESPN responded appropriately by offering standalone streaming subscriptions requiring no long term or large bundle commitment. Last year, Hulu surpassed $1B in advertising, strengthening the case for cloud-based programming as a viable investment for advertisers.

Last year, 695,000 hours of Netflix and 4.5M YouTube videos were streamed every single minute. As streaming and the need for the delivery of content on demand grows, cloud will continue to play a significant, and eventually dominant, role in the way content is delivered and consumed—and for good reason.

Cloud delivers unparalleled ability to scale on demand, while providing greater agility and flexibility for access to services. It also eliminates the cost burden of maintaining idle servers on premises or offsite. To keep pace with rapid industry evolution, M&E companies would require extensive additional investments in on-premises infrastructure. Streaming, however, is only one reason for the cloud.

Rather than adding a new server when demand exceeds capacity, cloud-based virtual machines (VMs) provide additional power and storage at a fraction of the cost of traditional server farm expansion. These VMs are also maintained and secured by the cloud provider so no additional on-prem resources are required.

In addition to hosting and providing faster, more secure, and highly scalable access to content offerings, another media-relevant subset application of cloud is hybrid rendering— where the actual creation of content occurs.

Hybrid Rendering: More power when you need it

For example, the conservative monthly cost of a VM is $50 compared to $5K to $10K required to add a new, on-premises rendering server. Significant sums have already been invested in server farms. It is neither realistic nor necessary for companies to completely replace on/ offsite servers with on-demand cloud VMs. Instead, the cloud provides capacity to meet spikes in demand so that companies only pay for additional computing power as needed.

An ocean view from the cloud

A great example of hybrid rendering application is the film, “Adrift”.

To significantly reduce production costs, Milk VFX used AWS spot instances and Thinkbox Deadline, spinning up and down servers as needed. Without the cloud and hybrid rendering, “Adrift” would never have been made in such a short timeframe with a limited budget.

By using virtual machines in the cloud, companies can increase speed, efficiency, and scalability without adding to existing infrastructure, or additional on-prem/off-prem rendering server maintenance.

Our third use case shows how artificial intelligence (AI) is being applied to transform media and entertainment experiences.

In 2017, the Wimbledon Tennis Championships and IBM partnered for the first time to deliver cognitive highlights—AI-driven highlights of champion tennis matches with data generation—to improve fan experiences. IBM’s Watson AI was used to automatically curate over 14M highlights based on analysis of crowd noise, player’s movement, and match data—all without human intervention. Previously producers and editors were required to review all footage in order to manually determine the best moments to present. This AI-driven process reduced highlight package production time from extensive hours to mere minutes— providing the best highlights in closer to real time vs in traditional recap fashion.

The impact of AI on programming isn’t exclusive to sports. Sky News leveraged artificial intelligence in coverage of Prince Harry and Meghan Markle’s wedding in 2018. The network’s AI-driven “Who’s Who Live” automatically highlighted celebrities appearing on screen, providing instant details about his or her connection with the royal couple using captions and graphics.

Viewers were able to navigate celebrity data without leaving the Sky app and without missing the primary coverage. The result was a selfguided viewing experience with each celebrity sighting—a prime example of the multi-screen viewing habits that media companies must acknowledge. Sky delivered this intelligent viewing experience by combining the analysis platform GrayMeta (for simultaneous access to multiple data sets) with AWS Rekognition.

Start now for the future

Media and Entertainment’s digital journey will continue to accelerate. Companies not leveraging the power of readily accessible technologies like cloud and AI now will watch as early adopters—and digital-native disruptors— continue to extend their competitive leads.