An alert published by the CISA, the FBI, and the HHS states that the Hive ransomware group extorted over $100 million in ransom payments from 1,300 organizations, from June 2021 to November 2022. Read more: Alert (AA22-321A) #StopRansomware: Hive Ransomware

CISA, the FBI, and the HHS have issued a joint report on the Hive ransomware. Read more: Alert (AA22-321A) #StopRansomware: Hive Ransomware

“As of November 2022, Hive ransomware actors have victimized over 1,300 companies worldwide, receiving approximately US$100 million in ransom payments, according to FBI information.”

The US Cybersecurity and Infrastructure Security Agency (CISA), the FBI, and the Department of Health and Human Services have jointly released an alert warning of an uptick in the spread of Hive ransomware. The threat actors have targeted multiple business and critical infrastructure sectors, with a focus on healthcare and public health. As of this month, Hive ransomware threat actors have received nearly $100 million in payments. The alert includes technical details as well as indicators of compromise (IoCs) and recommended mitigations.

Tata Power, one of the largest electrical power producers in India, disclosed a security breach in a document [PDF] filed with India’s national stock exchange. The company said the incident only impacted its IT systems—which is currently in the process of restoring—and that all other critical systems are operating as normal. Read more: Tata Power, a top power producer in India, confirms cyberattack

Authorities in Canada are investigating a ransomware attack that hit the network of Bell Technical Solutions, a Bell Canada subsidiary. The attack resulted in data theft. The affected servers contained “operational company and employee information.” 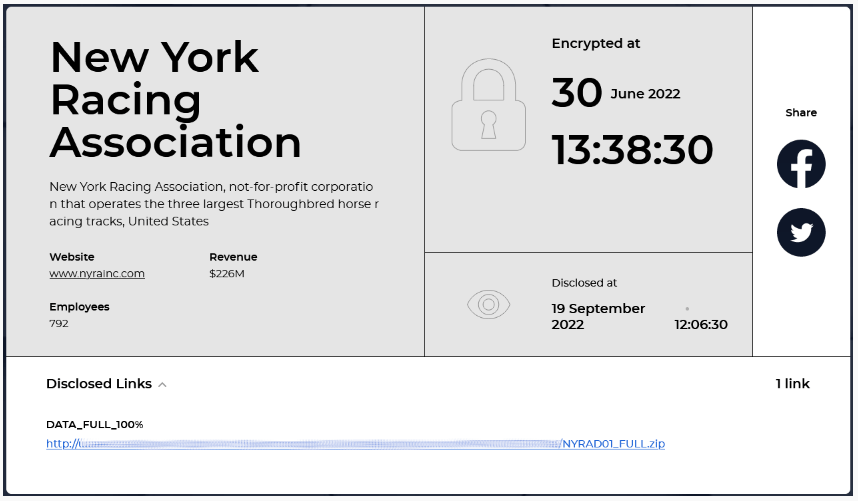 Hive ransomware group claimed responsibility for the New York Racing Association (NYRA) cyberattack. On their extortion website, the organization listed NYRA as a victim and published a ZIP download containing all of the files stolen from their computers. Hive was able to steal members’ personal information, including health records, health insurance information, driver’s license identification numbers, and SSNs.

A security researcher named reecDeep has released a free tool that can help victims that had their files locked by version 5 of the Hive ransomware recover their files. Previously, South Korea’s cyber-security agency KISA released decrypters for the first four versions.

Microsoft has published a technical analysis of the Hive gang’s new Rust-based ransomware strain, which the group has been using in attacks since March this year.

The Costa Rican Social Security Fund was struck by Hive ransomware this week, and Krebs on Security reports that the incident is affecting the national health service and medical centres are being forced to use manual processes. This comes just weeks after the Costa Rican President declared a national emergency following a mid-April Conti attack that cruelled many government services.

Cyber security company AdvIntel believes there is some sort of relationship between Hive and Conti that at the very least involves affiliates operating with both groups. Hive and Conti also have both listed victims in common on their websites, but Hive has denied any affiliation.

While #Hive and #Conti have both listed the same two companies, the former has updated its website to claim "we are not related with Conti." 1/2 pic.twitter.com/ZKUNNF8XvA

A healthcare system serving parts of West Virginia and Ohio was the target of a cyber incident on Sunday, August 15. Memorial Health System comprises 64 clinics, including three hospitals; all are operating under electronic health record (EHR) downtime. Urgent surgeries and other procedures have been cancelled, and emergency cases at some Memorial Health System facilities are being diverted to other hospitals.

The FBI has released a TLP: White Flash Alert regarding the Hive ransomware, which has been used in at least 28 attacks, including the Memorial Health System in Ohio and West Virginia. The alert describes technical details about the ransomware and lists indicators of compromise.