Deep Instinct researchers have an analysis of Emotet’s return, the infamous spam botnet that has been asleep since June this year. More on this from Proofpoint too. Read more:

Proofpoint has a detailed write-up of the recent Emotet spam campaigns after the botnet came back from its most recent hiatus, with the botnet ceasing all activity between June and November 2022. As Proofpoint’s Sherrod DeGrippo told RiskyBizNews in our latest podcast, this comeback involved lots of international lures targeting users using phishing emails in different languages, such as Greek, German, French, Italian, Japanese, Portuguese, and Spanish. Read more: A Comprehensive Look at Emotet’s Fall 2022 Return 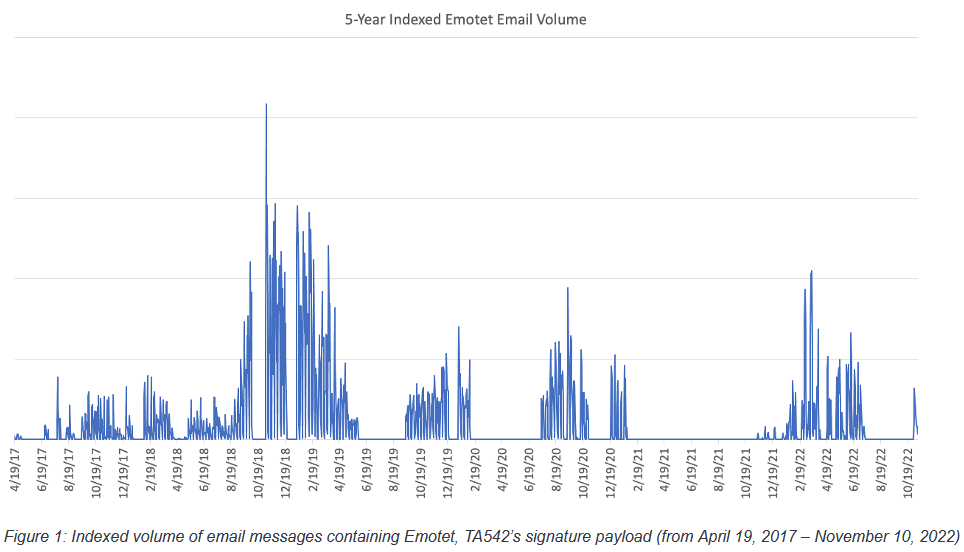 Emotet has returned to the threat landscape after a hiatus of four months, noted Proofpoint researchers. In a new update, it is now dropping IcedID. Read more: A Comprehensive Look at Emotet’s Fall 2022 Return

Cisco Talos has analyzed the recent email malspam campaigns coming out from the Emotet botnet, which recently came back to life after being dormant for months since June this year. Read more: Emotet coming in hot

🚨Emotet back in Distro Mode🚨 – As of 0800 UTC E4 began spamming and as of 0930 UTC E5 began spamming again. Looks like Ivan is in need of some cash again so he went back to work. Be on the lookout for direct attached XLS files and zipped and password protected XLS. 1/x

After stopping operations back in June, the Emotet botnet is back at its old tricks, sending out new email spam waves in search of new victims. Read more: Emotet botnet starts blasting malware again after 4 month break

🚨Emotet back in Distro Mode🚨 – As of 0800 UTC E4 began spamming and as of 0930 UTC E5 began spamming again. Looks like Ivan is in need of some cash again so he went back to work. Be on the lookout for direct attached XLS files and zipped and password protected XLS. 1/x

The VMware Threat Analysis Unit has put out a 68-page report on the activities of the new incarnation of the Emotet botnet, which returned to activity in January this year after being taken down by law enforcement in 2021. Read more: Emotet Exposed: A Look Inside the Cybercriminal Supply Chain

Trustwave SpiderLabs spotted a rise in threats contained in password-protected archives, with 96% of these being spammed by Emotet. Read more: Nested self-extracting RAR

Because Dridex operated on a closed model, providing limited access to their botnet to only a handful of very carefully vetted operators, Emotet, and later TrickBot, cornered the market in MaaS services working with ransomware gangs. Read more: More on URSNIF (Gozi/IFSB)

The Emotet malware has returned to deploying an SMB spreader module to allow it to move laterally across an infected network. Read more: Emotet SMB spreader overview

The same Proofpoint Threat Insights team also reported a major change in the Emotet botnet, which made a comeback last year. According to the security firm, in recent attacks, a section of the Emotet botnet also tried to load a payment card stealer module inside the Chrome browser. Proofpoint said that “once card details were collected they were exfiltrated to different C2 servers than the module loader,” suggesting the data might have been collected by someone running tests or who rented access to the Emotet botnet for this particular operation.

On June 6th, Proofpoint observed a new #Emotet module being dropped by the E4 botnet. To our surprise it was a credit card stealer that was solely targeting the Chrome browser. Once card details were collected they were exfiltrated to different C2 servers than the module loader. pic.twitter.com/zy92TyYKzs

Updated on May 2022: Emotet botnet

The Trend Micro team has published a technical report on the recent malspam campaigns carried out by the Emotet botnet since its return this winter.

Microsoft’s monthly security updates for December 2021 comprises fixes for more than 65 vulnerabilities, including one for a zero-day flaw in AppX installer that has been used to spread Emotet malware. The batch of fixes also fixes an issue that prevented Defender for Endpoint from launching on certain systems.

Law enforcement agencies and judicial systems authorities from Netherlands, Germany, the United States, the United Kingdom, France, Lithuania, Canada and Ukraine have worked together to disrupt functionality of the Emotet malware. The operation took control of Emotet’s command-and-control infrastructure, which comprised hundreds of servers around the world. At least two people have been arrested in Ukraine in connection with the operation. Law enforcement officials in the Netherlands are delivering an Emotet update that will remove it from infected devices on April 25, 2021. Read more in:

Updated on July 2020: Emotet Botnet is Back

The Emotet botnet, which has been dormant since early February 2020, has re-emerged. On Friday, the botnet became active again, sending spam in an attempt to infect new users with the malware using malicious Word and Excel documents.

Microsoft’s Detection and Response Team (DART) has published a case report that describes an incident in which the Emotet malware shut down an entire operational network. The attack began with a malicious attachment to a phishing email. Once the attackers gained purchase within the system, they proceeded to spread Emotet throughout the system. Emotet updated with new definitions every few days, enabling it to evade detection by antivirus programs. The malware maxed out computers’ CPUs and consumed the network’s bandwidth, shutting down the company’s core services.

Note: “Phishing” and other attacks designed to dupe and exploit users will continue to be the Achilles heel of the enterprise unless and until we isolate e-mail and browsing from other enterprise applications.

Note: The Japanese CERT, JP-CERT, has a great write up on this malware at www.jpcert.or.jp: [Updated] Alert Regarding Emotet Malware Infection, and they have also released a tool to check for Emotet called EmoCheck; it can be downloaded from the JP-CERT GIT Repository: github.com: JPCERTCC / EmoCheck