Scientists have been conducting research for years to unlock the secrets of the human mind, and we’re pretty obsessed with it. But our synapses really start firing when we think about how brain science can be applied to email marketing. It’s fascinating stuff — and smart marketers are taking notice. And because you may or may not get excited about your very own pair of safety googles and test tubes, see how six top brands are using the latest research to get brilliant email results. 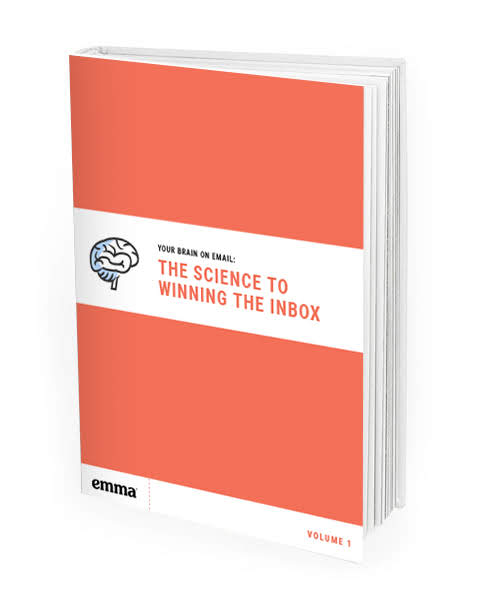 In this guide, you’ll find 6 fascinating brain science facts complete with examples of how brands are using them to get better results in the inbox.

(Don’t give ‘em all the goods right away.)

Marketers can use the Zeigarnik Effect to boost engagement because something that looks incomplete to our brain will demand our attention until we’re able resolve or complete the task. It’s why we can’t resist…

…reading what comes next after an ellipsis. So tap into the Zeigarnik Effect by using copy or design that both teases your content and makes your audience feel like it’s going to lead to a big payoff if they complete whatever task you’re asking of them (AKA, opening or clicking your email). 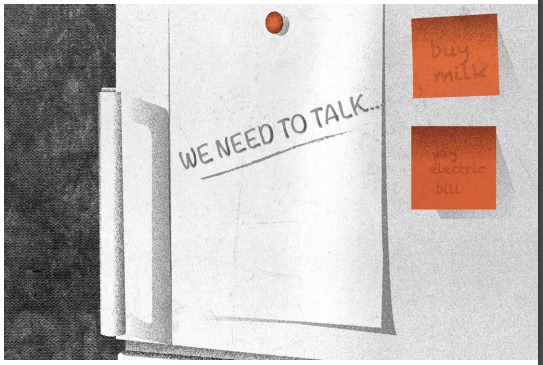 Want more people to open your email? Try an incomplete phrase followed by an ellipsis as your subject line (e.g. “Here’s the deal…”)

This re-engagement email by misguided is built around the Zeigarnik Effect. 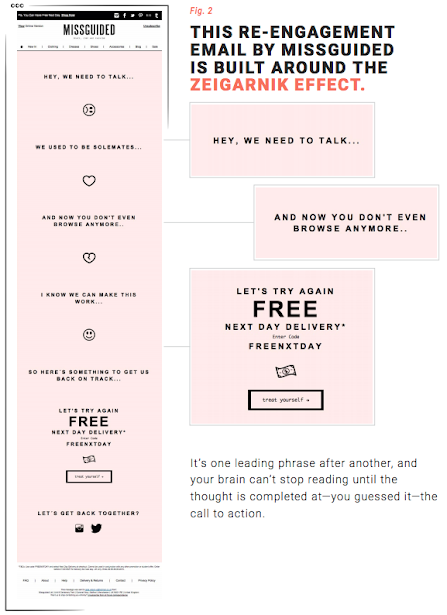 It’s one leading phrase after another, and your brain can’t stop reading until the thought is completed at—you guessed it—the call to action.

We all have a primitive, lizard brain. It’s called the amygdala, and it’s responsible for our gut reactions and basic fight-or-flight instincts. It might be primitive, but it’s certainly not slow. The amygdala works much faster than our conscious mind, making snap decisions in 3 seconds or less.

Your subject line and preheader text work together to get people to open your email, so use words that create excitement, urgency, or even low-grade anxiety to tap into that fight-or-flight response.

And when it comes to design, the amygdala is drawn to images of food, danger, and sex (yep, total lizard brain). But, you know, don’t overdo it. 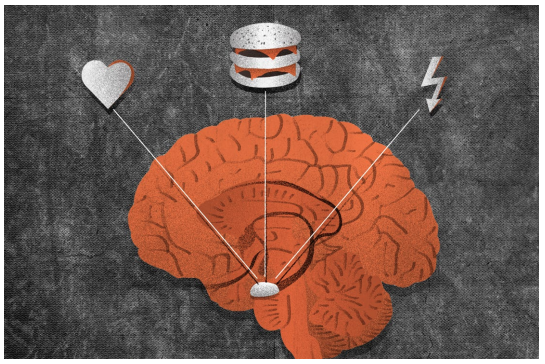 We have an emotional response 5 times faster than a conscious thought.

This email from Southern Lifestyle Magazine Garden &amp; Gun perfectly illustrates the power of The Amygdala. 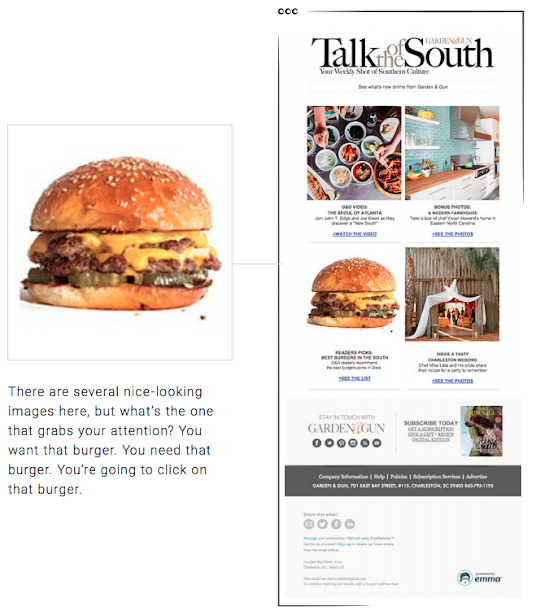 (Do good things. Your audience will return the favor.)

Research shows that consumers believe products of “caring” companies are superior, which can lift those companies’ profits (Alexander Cherney and Sean Blair, 2015). Think TOMS or Warby Parker—the “buy one, we’ll donate one” model does wonders for their brand perception (and their bottom line).

The catach? The Noble Edge Effect only works when those efforts feel sincere.

Today’s consumers are savvier than ever—they know a PR stunt when they see one—so it’s important that you give back in a way that’s meaningful and aligns with the values of your brand. 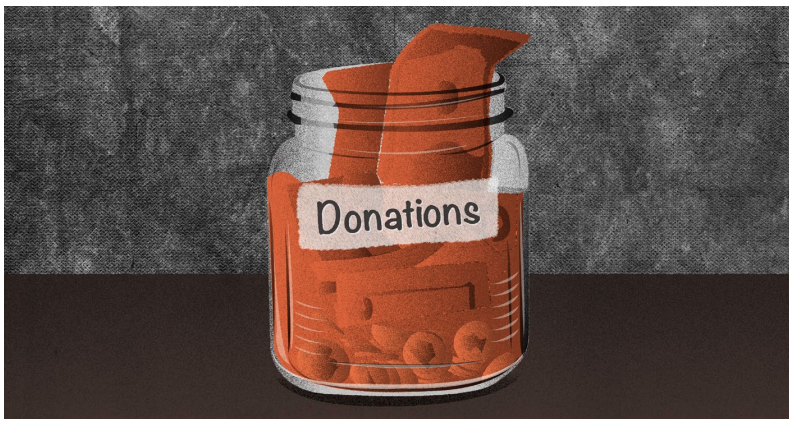 53% of people say they would pay 10% more for products from socially responsible companies (Havas Media).

Goldieblox is a toy company whose mission is to empower girls to become engineers nd “disrupt the pink aisle” for good. 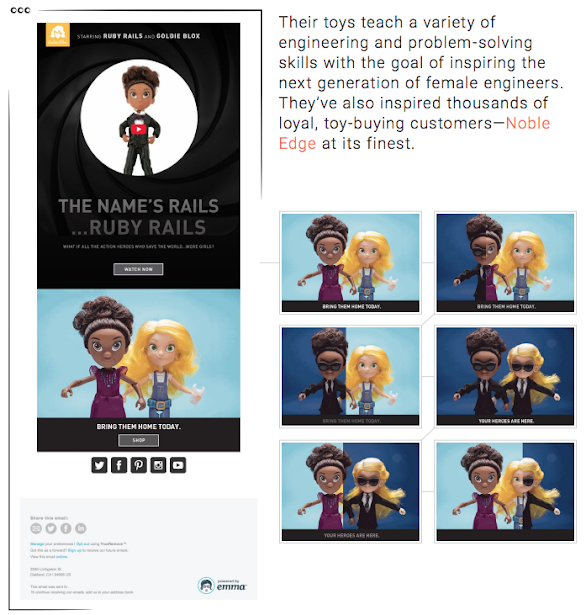 Their toys teach a variety of engineering and problem-solving skills with the goal of inspiring the next generation of female engineers. They’ve also inspired thousands of loyal, toy-buying customers—Noble Edge at its finest.

(Remind us of the good ol’ days, and reap the benefit today.)

Nostalgia is a powerful, powerful emotion—We all love to look back at old photos and video to relive the glory days. It’s why that time you tried to recreate the lift from Dirty Dancing and sent your crush to urgent care is hilarious now rather than mortifying (hypothetically speaking, of course).

Nostalgia isn’t just for the retail space, though. Nonprofits can tap into it for a donation push or to recruit new volunteers. And using nostalgia is something that should be practically mandatory for university marketers. After all, what better way to appeal to alumni than to remind them of all the awesome times they had on campus? 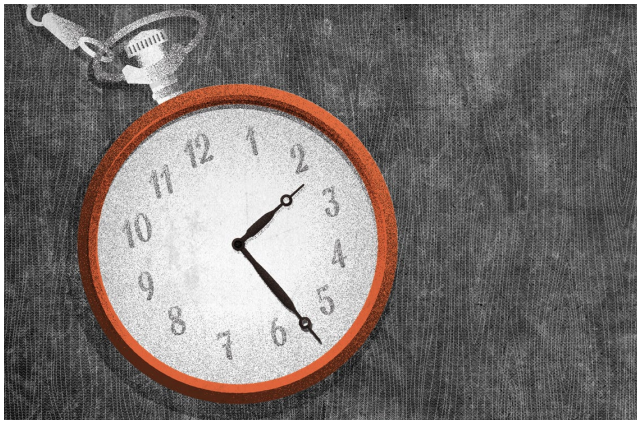 People are willing to spend more on products that bring back fond memories than ones that help us make new ones (Lasaleta, Sedikides & Vohs, 2014).

Homage is a clothing brand that pretty much owes its entire existence to the power of Nostalgia – and this email is heavy on it. 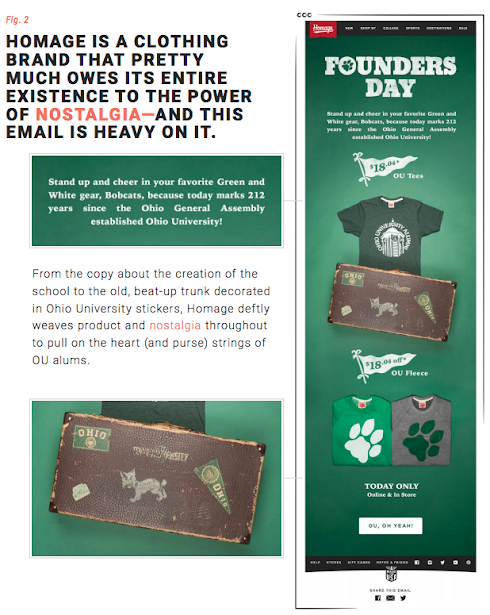 From the copy about the creation of the school to the old, beat-up trunk decorated in Ohio University stickers, Homage deftly weaves product and nostalgia throughout to pull on the heart (and purse) strings of OU alums.

(If it looks weird, we’ll remember it.)

The Von Restorff Effect is probably the most obvious cognitive behavior in this report, but it’s also one of the most effective. It explains why something that stands out like a sore thumb immediately becomes more memorable to us—and marketers have been taking advantage of it forever.

Think of how many ads you’ve seen where everything is in black and white, but the product they’re selling is in blazing color. That’s the Von Restorff Effect at work.

It’s also why big, bright call-to-action buttons work much better than text links in your email. They stand out from the uniform text and background around them. You can enhance this effect by surrounding them with plenty of white space, choosing a contrasting color, and using bold, active language.

80% of people are only scanning your email, so tap into the Von Restorff Effect to stop them in their tracks and grab their attention (Nielsen Norman Group). 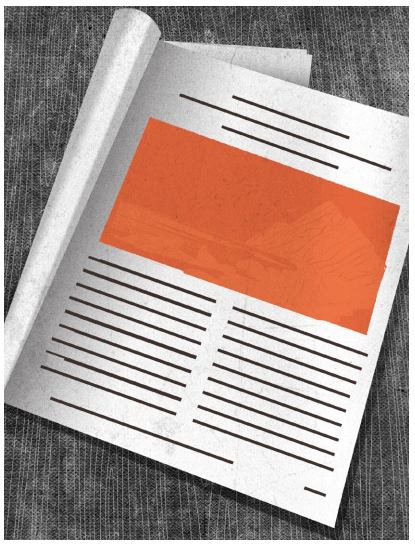 The Von Restorff Effect is why we lock in on images where something doesn’t seem quite right – you know, like a cute dog wearing rain boots. 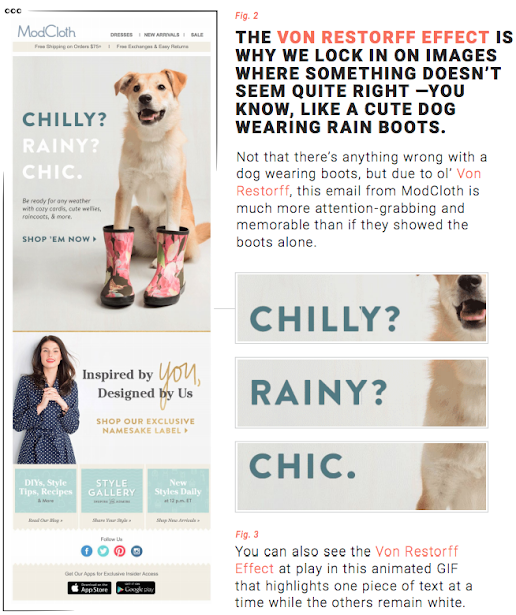 Not that there’s anything wrong with a dog wearing boots, but due to ol’ Von Restorff, this email from ModCloth is much more attention-grabbing and memorable than if they showed the boots alone.

You can also see the Von Restorff Effect at play in this animated GIF that highlights one piece of text at a time while the others remain white.

(We’re all a bunch of copycats—when no one’s looking.)

Social Default Bias says that when we’re having trouble picking between products, we’re more likely to buy the one that others have chosen. The catch? We don’t want others to see us do it for fear of being seen as a follower.

It’s why we’ll totally order something we’ve seen someone across the restaurant chowing down on, but hesitate if someone at our own table has ordered it first.

This is what makes user-generated content and social proof so powerful for marketers (especially when paired with email). Your inbox is typically a private place. When you see an email that includes photos or quotes from real customers using a product, then you feel like it’s already been vetted, which makes it that much easier to purchase it. And no one has to know you followed the crowd. 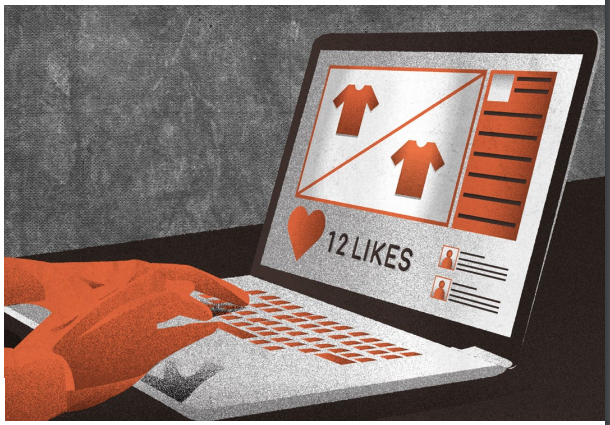 This email from Stitch Fix is all about playing into our Social Default Bias.

The “Don’t take our word for it” headline sets the table nicely, and the quotes and photos from real customers hammer home the point. If Stitch Fix works for them, it may work for you, too. 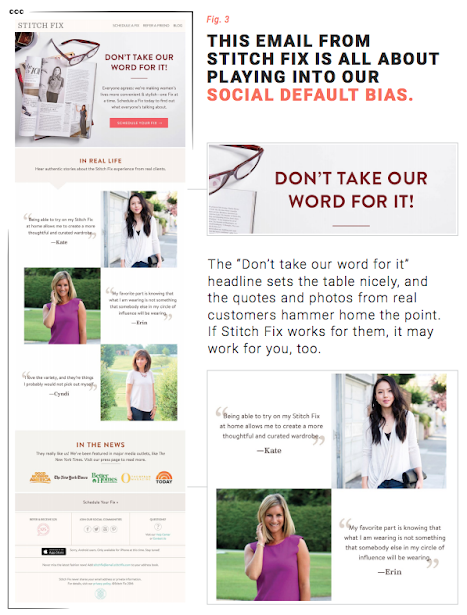