Kaspersky identified a new data wiper, dubbed CryWiper, that was used for destructive attacks against Russia’s mayor’s offices and courts. The malware pretends to be a ransomware. Read more: New CryWiper wiper targets Russian entities masquerading as a ransomware

Researchers at Kaspersky have detected malware they call CryWiper on networks of Russian courts and mayors’ offices. CryWiper pretends to be ransomware: “it modifies files, adds a .CRY extension to them (unique to CryWiper), and saves a README.txt file with a ransom note.” However, it actually permanently destroys data.

Judicial courts and mayor officers across several Russian regions have been hit by a new data-wiping trojan, according to reports from Russian antivirus maker Kaspersky and local news outlet Izvestia.

Named CryWiper, the malware goes through the motions of a ransomware attack, where it scrambles files and leaves a ransom note demanding money. But Kaspersky researchers say they found evidence of data destruction routines, meaning that even if victims paid the attackers, they would not be able to recover their files.

Neither Kaspersky nor Russian government officials have formally attributed CryWiper to any specific group or entity, but the attacks over the past month are most likely connected to the Russian-Ukrainian conflict, which involved the deployment of multiple wipers, on both sides of the conflict.

Russia wasn’t spared either, being hit in March by another wiper posing as run-of-the-mill ransomware, a wiper named RuRansom. 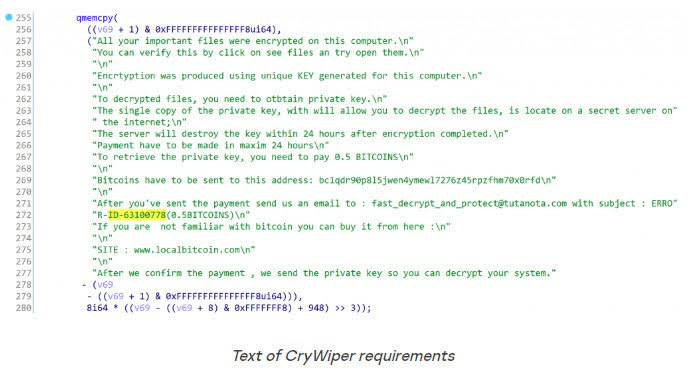