After several years of sustained “growth,” 2022 was the first time that the volume of cryptocurrency transactions linked to criminal activity saw a decline (they actually went up, but if we remove the sanctions category, which is more of a gray area, they went down).

The only category that saw growth was “stolen funds,” but this comes after a record-breaking year in cryptocurrency platform hacks, with more than $3.9 billion stolen last year. 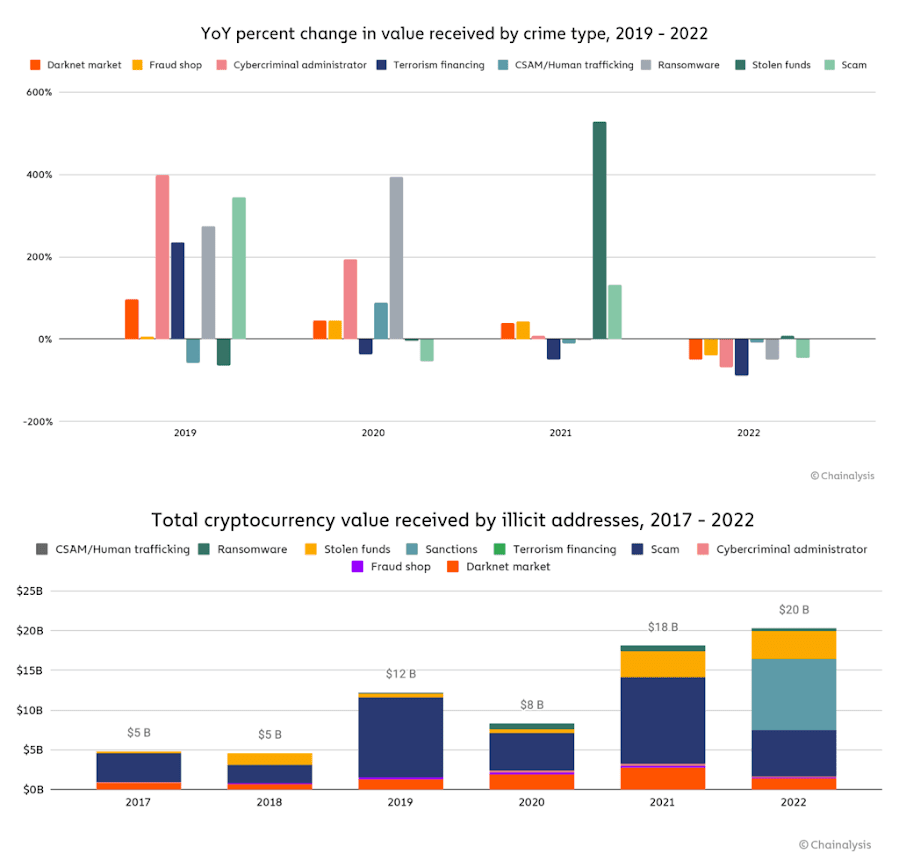 The reasons for this demise are layered and complex and not the simple and straightforward answer that we can usually find in most cases.

The war in Ukraine, the US Treasury’s sanctions crackdown on cryptocurrency money launderers, major law enforcement busts, and the general collapse of the cryptocurrency ecosystem as a whole have all had their role in slowing down criminal operations.

For example, as Chainalysis experts put it—people are less likely to fall for scams if they think the entire ecosystem is down and aren’t interested in making new investments.

“The market downturn may be one reason for this. We’ve found in the past that crypto scams, for instance, take in less revenue during bear markets, likely because users are more pessimistic and less likely to believe a scam’s promises of high returns at times when asset prices are declining. In general, less money in crypto overall tends to correlate with less money associated with crypto crime.”

Furthermore, other declines can be explained by other factors. For example, transactions linked to ransomware payments were down last year not because the crypto market was down but because organizations generally stopped paying ransoms as part of a new wider trend—as explained in this separate Coveware report. Chainalysis also saw the same thing and estimated ransomware-linked transactions (payments) last year to be around $456.8 million, down roughly 40% from the $765.6 million ransomware gags made the year before.

Coveware credits this to an improved security posture at many organizations and a wider adoption of backup solutions that made recovering from ransomware attacks without paying to decrypt files less costly.

Obviously, these kinds of reports only cover a small portion of illicit transactions, but they do show some things, such as trends. What we learned over the past year is that government and law enforcement agencies appear to have reached their boiling point when it comes to cryptocurrency and its propensity to be used as a money laundering medium.

Sure, some may criticize the efficiency of the recent sanctions and judicial crackdowns on mixers and shady exchanges. Did these services stop operating? Some, but definitely not all. However, the sanctions have isolated these services and put a damper on some money laundering operations, forcing threat actors to look for new ways to move funds without exposing themselves to tracking and possible asset seizures.