Recent Informa Engage research spotlights robust compensation in the channel and IT overall, as well as a generally optimistic outlook on working in the channel. But there are some less-than-positive numbers to consider, too.

In this article, you’ll learn:

Average Salaries in the Channel Are Robust
Base Salary Is Not the Only Form of Financial Compensation
Salaries Are (Mostly) Increasing
Cloud, Security Among Top Skill Development Areas
Training and Certifications Overall Are a Gray Area
Reminder: Non-financial Benefits (Such as Professional Development) Matter
People in IT and the Channel Are (Mostly) Happy
Satisfaction Means People Are More Likely to Stay Put

Recent Informa Engage research on salaries and other job attributes finds that it is a good time to be a channel or IT professional.

Your individual mileage may vary based on a variety of factors, but to speak generally for a moment: It’s good to be in IT and the channel. More specifically: It’s good for your bank account.

That’s one way to read recent research conducted by Informa Engage on salaries and other job attributes among both channel professionals and the broader IT field. Again, individual experiences might vary, but overall compensation is healthy and getting healthier. That’s one reason for another conclusion from the research: People in the channel and IT overall are largely (but not completely, of course — more on that below) satisfied in their jobs.

If you’re on the hiring side of the job market, you might read this differently: If people are happy, they’re probably less likely to look elsewhere. That’s a good thing. But with robust hiring, the competition for talent continues to be tough. While economic and other factors can always change, the current outlook is: Expect more of the same.

“Technology hiring has increased consistently over the last several years and, based on the early stages of 2019, we expect to see this trend continue through the next quarter,” says Ryan Sutton, district president for the recruiting firm Robert Half Technology.

In this Channel Partners report, we’ll analyze the Informa Engage data for some of the most important takeaways for both channel partners and channel pros working in the field, and stack them against the overall IT field. Plus, Sutton will share a national recruiting perspective for added context that’s important for both hiring managers and potential job seekers to keep in mind in this market.

So let’s start with something that speaks to just about everyone – money.

Average Salaries in the Channel Are Robust

IT salaries in general are healthy, but channel compensation is even healthier.

Moreover, a higher percentage of channel pros are above the six-figure threshold, with 50 percent earning more than $100,000 in 2018. (Lest we get delusions that channel pros are rubbing elbows with the Mark Zuckerbergs of the tech industry, it should be noted that most of this group earned between $100,000 and $124,000 in 2018.)

This reflects a smaller sample size for channel pros; it also probably reflects the number of owner,operators and high-ranking executives in the mix, relative to more rank-and-file employees (at lower compensation levels) in the overall IT pool.

But no matter how you slice it, average compensation in the channel and IT overall reflect a tight labor market and robust technology hiring across industries. That’s good news if you’re on the job market; it’s a dose of reality if your firm has job openings, especially if you’re a little too patient in your hiring processes or trying to cut corners in terms of compensation.

“The best advice we can offer employers in this market is simple – move efficiently and swiftly when it comes to your hiring process, but an expedited process does not mean a rushed or thoughtless process,” Sutton says. “Further, as it relates to salaries, market wage is what you should be offering. To offer below the prevailing market wage will create future turnover.”

Base Salary Is Not the Only Form of Financial Compensation

Not everyone gets a bonus – 51 percent of IT pros overall reported they hadn’t received one in the past 12 months. But for the other half that do, it’s a nice bump in their overall annual income, with the average bonus sitting at $7,821. Roughly one in four IT pros who received a bonus in the past year received more than $10,000. Moreover, 70 percent of IT pros indicated they expected to receive a bonus next year.

The number of channel pros who received bonuses in the year is about the same – it’s split roughly in half, with 47 percent getting one. But the bonuses are bigger in the channel, averaging $12,153, with 40 percent receiving a bonus in excess of $10,000. Channel pros are slightly less optimistic about bonuses in the year ahead than IT overall, with 63 percent anticipating one.

The other good news: The majority of salaries are increasing, with 63 percent of channel pros saying their 2018 compensation was higher than in 2017. Just 7 percent said their salary decreased. IT pros overall reported even more increases, with 69 percent saying that their 2018 salary was better than their 2017 salary. Just 6 percent of IT pros said their salary decreased last year.

Reasons for raises were both similar and relatively unsurprising: Job performance was the top driver for salary increases in both the channel (44 percent) and broader IT sector (43 percent), followed by standard company increases (33 percent in the channel, 41 percent in IT overall).

During the previous 12 months, 27 percent of IT pros reported they’ve worked on improving their skills in security (27 percent) and cloud (19 percent), via training or other means, making those the top two skills being honed.

Channel talent is also beefing up its security (22 percent) and cloud (17 percent) chops, though those rank second and third on the list; leadership and professional development skills came out on top at 23 percent. (That category ranked third for the broader IT sector, at 18 percent.)

The focus on security and cloud skills is a good thing: They’re among the most sought-after skills on the job market today, according to Sutton from Robert Half, and tight supply means these skills can command a premium.

“Demand is especially high for cloud, cybersecurity, software development and DevOps professionals,” Sutton says. “While there’s an increase in demand for these skills, there’s also a smaller talent pool, which is driving wages up in these areas.” 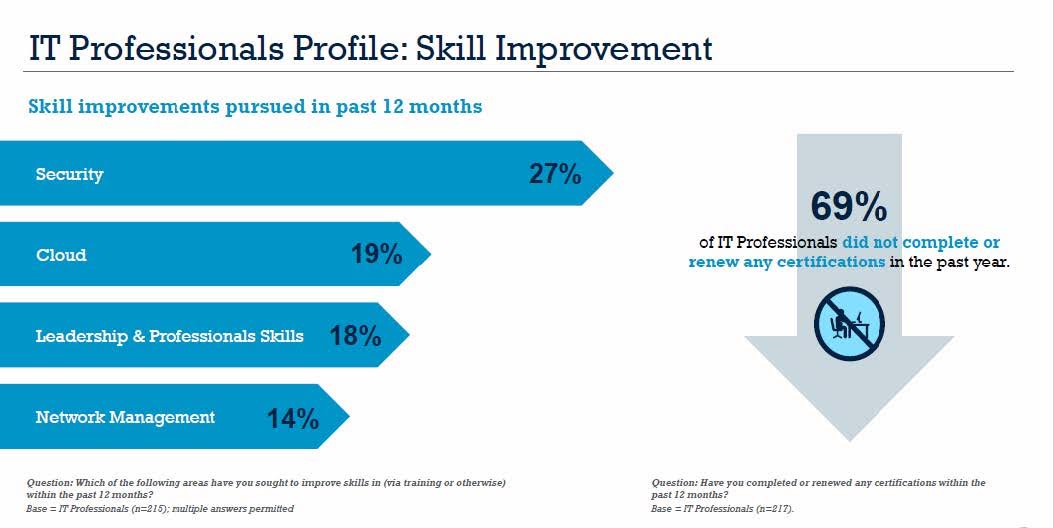 Training and Certifications Overall Are a Gray Area

While it appears at least some channel and IT professionals are staying abreast of the in-demand skill sets, the overall training picture is murkier. While a full two-thirds of channel pros who’ve recently completed or renewed certifications said that those will have an impact on their effectiveness in their current role, the majority of people (62 percent) didn’t complete or renew a certification in the previous 12 months. The overall IT field reported similar numbers.

There are two key reasons why: 38 percent of channel pros said they didn’t complete or renew a certification because their employer didn’t require it, and 30 percent said their workload was too heavy to pursue professional development opportunities outside of the office. Among IT pros overall, the top two deterrents were lack of training budget (36 percent) and heavy workload (34 percent).

Most people don’t work for free; when it comes to both recruiting and hiring as well as individual job satisfaction, money matters. A lot.

But it’s not the only thing that matters, and the Informa Engage data on certifications – only one type of professional development, to be sure, but a highly visible one in IT – should remind us that compensation is about more than salary and bonuses. This reminder is especially important if you’re a partner struggling to attract tech talent.

People in IT and the Channel Are (Mostly) Happy

Grumbling about your job isn’t an uncommon scenario in the working world – we’ve all been there. But the grumpy IT guy stereotype? It doesn’t really bear out these days. Job satisfaction is pretty high: 71 percent of channel folks report being somewhat or very satisfied with their current position, according to our data, with just 16 percent saying they’re unhappy in their current role.

That’s actually a tick higher than the general IT industry, where 67 percent of professionals report they’re either somewhat or very satisfied in their current job, compared with 20 percent who say they’re dissatisfied.

Other signs of job satisfaction in the channel include:

It’s not all roses, though: One in four channel pros say they can’t complete their work in a normal 40-45-hour workweek. 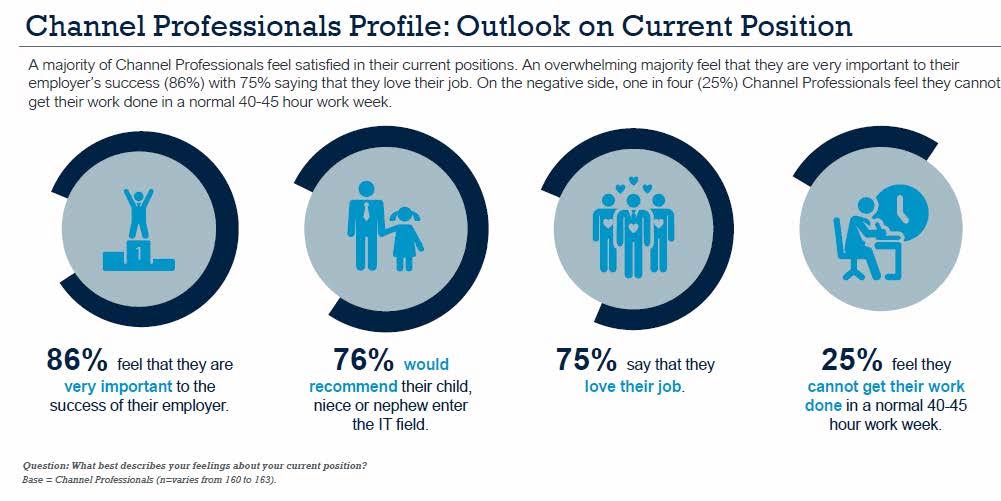 That means people aren’t necessarily itching to seek out greener pastures, especially in the channel, where half of respondents said they’re unlikely to seek employment elsewhere in the next 12 months.

What about that other half? Around one in four people (24 percent) say they’re uncertain if they’ll look elsewhere, while the other 26 percent say they’re likely to job-hunt this year.

In the broader IT sector, 35 percent of professionals say they’re likely to look around this year, and 27 percent say they’re not sure.

For those people who are looking around, you’re choosing a good time to do so, according to Sutton from Robert Half.

“For the candidates out there, now is a great time to evaluate your next career move,” Sutton says. “If you are not in a firm where you can see a next step in your career, it could be the right time for you to make that next exciting jump forward and upward given the strength of the talent market.”

Sutton offers some parting advice if you’re looking to hire talent in this environment. It’s more of a pep talk, really – one that should resonate with sports fans.

“Expect to compete when hiring, just as a collegiate athletic program needs to compete to recruit talent,” Sutton says. “Be careful not to overthink the market and play ‘hard to accept.’”