Search engines are far more savvy than they’ve ever been before, but that doesn’t mean that the jaw-dropping results from the frontier days of SEO are no longer possible. 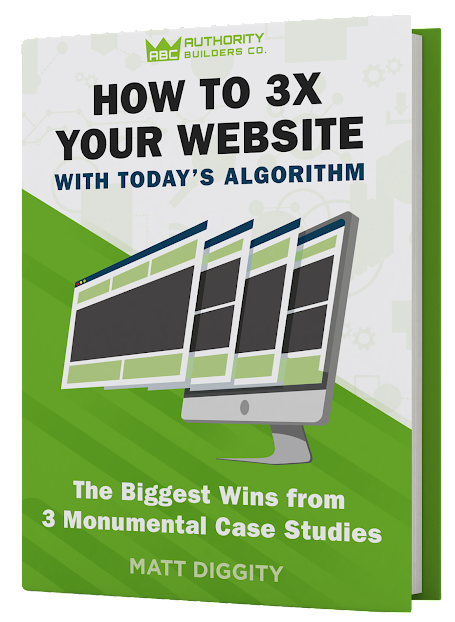 Learn the lessons from 3 case studies that managed to achieve incredible rankings in a short amount of time.

Search engines are far more savvy than they’ve ever been before, but that doesn’t mean that the jaw-dropping results from the frontier days of SEO are no longer possible. Today, we’re going to show you that they are.

Even with the latest algorithm you have the power to…

This is all possible with only a few months to a year of steady effort.

How do I know all this is true? Because we’ve done it.

In fact, those three examples are nothing more than the results of our latest case studies; the same case studies that are just a few tantalizing scrolls away from where you are now.

I’m going to show you exactly where we started with these sites and introduce you to the changes we made so that you can apply it all to your own site.

Interested? Great. Let me introduce the agencies (in addition to ABC) who participated in these studies and pioneered the techniques that made these results possible.

Leadspring LLC: Leadspring is a rapid renovation service for affiliate marketing. They take websites with great potential, and then use conversion know-how and a massive, massive network to turn those websites into super performers. This team was a natural match for these kinds of case studies because of their familiarity with making websites more competitive at a breakneck speed.

The Search Initiative: The Search Initiative is an agency focused on sorting through the latest SEO breakthroughs to find and implement the ones that have the best long-term growth potential. This team’s ability to filter cutting-edge ideas through 50 years of combined experience to create steady, reliable growth made them the perfect match to Leadspring’s perspective.

Now, let’s take a look at what these teams working together were able to accomplish, starting with a little passion project that they turned into a major cash machine…

That growth. Would you just look at it? What started as a hobby site was worthy of being called a money site by the end of a single year. To better understand how that was possible, let’s take a look at the starting stats for the project.

Hm. Matured, but not old enough for a lot of natural authority, right? Turning this into a performing site was, more than anything, a matter of filling it with great content. Let’s take a more in-depth look at the actions that were taken.

We decided that the first thing we needed to do was to get the site ranking for terms like “how to ____”. Shortly after those pages were added, they quickly muscled their way to 3 of the top 5 spots for the entire website.

This wasn’t a fix we went into blindly. We used Content Gap from Ahrefs to figure out where we were going wrong with the content targets. This is what they showed us:

Results like these are always going to mean an increase in actionable how-to information. We found some by focusing on reviews. 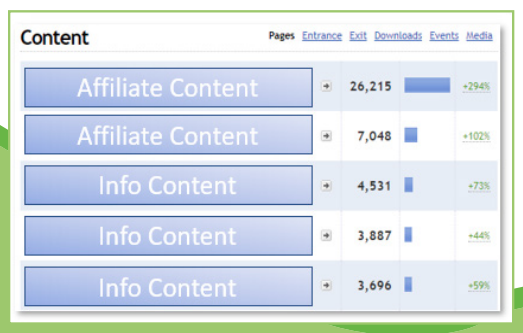 Step Two: Reviewed all Major Products in the Niche
For informational content to have value to visitors, it must have relevance. That’s why, instead of fishing around, we simply performed reviews of every popular product in this website’s niche.

This is very easy information to find with just a quick search. We were able to understand what mattered most to customers through an in-depth analysis of the reviews found on other sites.

This strategy not only made it easy to come up with masses of relevant new pages, but also allowed us to match all the biggest sites in the niche for the terms that they were targeting.

With that work done, we were ready to focus on some link building.

Step Three: Built Authority with an Aggressive Link Building Campaign
Authority Builders Co. was brought into the game at this stage to increase the number and quality of the referring domains. You can see in the graph below that this was an extensive effort involving nearly 100 new referring domains over the course of a year. With a sexier site, we were ready to approach our affiliate partner.

Step Four: Got a better Deal from Our Affiliate Partner
An important part of drawing a better profit is getting a better share for your efforts, and that’s what we did in the fourth step.

Now that we had a beefier and more professional-looking site, it was easy to get our affiliate partner to come to the table for a round of negotiations.

At the start, we were getting a blanket $12 on all the commissions–even if the sale was something extravagant like a $1000 product. To remedy this, we sought a new offer where we got to collect a 10% commission on all sales. $12 became our floor instead of our standard level of compensation. Now that we had good traffic and a good return for our traffic, it was time to take one extra step to increase revenue.

We had a ton of great new info pages, but they could have been doing more for us than just increasing our relevance. That’s why we built an excellent lead magnet – an ebook – to collect contact information from interested visitors.

From this, we were able to build a mailing list to further increase our revenue by targeting visitors with coupons and other offers.

Our different teams were really proud of these results, but the much smaller site that we’re going to cover next was almost more of a technical challenge. Our #2 case study was riddled with bad SEO practices that needed to be undone before it could start performing again.

Website #2 had some serious problems when we started. Unlike our first case study, this one had some clear obstacles to growth that had to be dealt with before we could start expanding.

Before we get to how we cleaned it all up, let’s take a look at the starting stats.

Multiplication of the visitors was possible after we completed the following steps.

Step One: Removed an Irrelevant 301 Redirect
Our first action on the site was to remove a 301 redirect that we judged to be irrelevant to our content. This was a risky starting move because removing it meant losing many of the existing referral domains. You can see the sudden drop in the graph just below.

You can also see that we recovered. That effort started with a replacement of the lost referring domains.

We needed a lot of new referring domains, and we picked them up with another intervention from my outreach service Authority Builders.

It didn’t take us long to notice that the competition that was outranking us didn’t rely on a lot of referring domains. However, all of them were high quality. We followed their example and focused on backlinks from ibm.com and and similar high-quality sources.

That wasn’t enough to solve all our problems, however. We were still dealing with a mass of thin, useless pages.

Step Three: Deindexed the Thin Pages
We used the (free) Screaming Frog tool to get a feel for the number of thin pages that we needed to purge from the website. What we found were tons of flimsy pages dedicated to product images, search parameter pages, and author bios.

After deindexing all of them, we were ready to look at the internal anchors.

Step Four: Balanced the Internal Anchor Text Ratios
A deep look at our anchors showed us that the “categories” pages all had the same exact target keyword anchor linking to them. It was grossly over-optimized, so we set about replacing the anchors with this new balance:

With this complete, we started looking into ways that we could improve the human experience on the site. We started with the speed.

Step Five: Increased the Site Speed
We took a number of actions to increase the response speed of the site, including optimizing the structure and implementing some common-sense best practices.

We didn’t predict that increasing the site speed would change the ranking much (it never does). However, really slow speeds quickly attract ranking penalties, especially when mobile searches are involved.

Our efforts took the site from loading in 4.2s to 1.6. You’re usually safe if you can manage two seconds, so getting it down to 1.6 was just icing on the cake.

Unfortunately, just mitigating the risk of a penalty was not going to be enough for the site in our next case study. You see, it had already been penalized.

Case Study #3: Recovering from Algorithmic Penalty (Software as A Service)

Here’s a site that took a fairly painful penalty hit near the beginning of the year. Recovery was long, and involved taking some more losses first. It was worth it though, because the site is now fully recovered.

Use the steps we detail here to learn how to resolve a penalty on your own site, or how to recover a site that you bought at a bargain price after a penalty hit. First, let’s look at the stats.

Step One: Disavowed All Negative SEO
This website was heavily weighted down by nasty negative SEO. A short search showed us that we were dealing not only with direct spam links, but with inappropriate canonicals and 301 redirects.

It was a pain, but ultimately we had to trace all of the links back through these canonical and 301s and disavow each of them individually. Here’s what the negative SEO campaign looked like as it ramped up starting around June.

With that completed, we took a run at improving the content of the site.

Step Two: Implemented A Content Overhaul
Search intent (the estimated motivations of people using the term) had changed a lot since these terms were first researched and built out for the site. A single page used to be able to cover both the terms “product” and “buy product”, but not anymore.

Now, we found it necessary to have those terms covered by two respective pages. We built out one page for the informative content about the product, and another page to serve as the lander for the product.

With better content to draw in visitors, we now had more reasons to consider the importance of the site’s trust.

Step Three: Improved Site Trust
This part was a pretty simple fix. The website had no about page… or contact page. It wasn’t very credible, and it needed to be addressed immediately. We added both pages and filled them with some relevant content.

Now, we were ready for ABC’s favorite part: A good backlink campaign.

Step Four: Started a Mild Backlink Campaign with Authority Builders
Authority Builders came in again to perform a mild backlink campaign with some quality guest posts. When we reviewed the site, we found that it had about 4X as many links as its competitors in the niche. So really, we weren’t looking to add too many more.

This was partially due to the negative SEO campaign that we dealt with in the earlier step, but we also had the problem because the site’s original SEO team built low quality links aggressively.

We built some new links, but were careful not to add to the existing messiness of the link profile. We built out guest posts at a gentle velocity of 3-4 per month.

By the end of that effort, we started to see the hard upswing that you saw in the first graph.