Security researcher William Thomas said that cracked versions of the Brute Ratel red-team framework have been leaked and are widely shared on underground hacking forums. The leak occurred after an unknown entity uploaded the Brute Ratel tool on VirusTotal earlier this month, which eventually allowed threat actors to get hold of it and crack its installer. Brute Ratel’s author blamed security firm MDSec for the leak, but the tool was already being used in attacks since July already, in ALPHV/BlackCat ransomware attacks. In the meantime, defenders might want to get acquainted with detecting Brute Ratel beacons before it’s too late.

Brc4 v1.2.2/5 was leaked by MdSec and is circling the internet. I am tracking it over the past few weeks. MdSec uploaded the whole package to VT which was cracked by a Russian group Molecules, and now used by TAs which will most likely create an irrepairable damage. blog incoming pic.twitter.com/3NpUh2lOYF

Palo Alto Networks said it identified a suspected APT29 campaign that abused Brute Ratel, an adversary emulation framework developed by a former Crowdstrike and Mandiant security engineer. The Brute Ratel author said they took actions against the licenses abused in these attacks, which they claim were sold on the black market.

And if you didn’t like that report on ExMatter, here’s one from Stairwell instead. As Lucian Constantin points out in his CSO coverage, ExMatter might be a game changer since it allows BlackCat operators to exfiltrate files, corrupt them on the victim’s network, and then demand a ransom to return them—a process that’s much faster than encrypting and decrypting them.

Luxembourg-based energy provider Encevo has acknowledged that some of its subsidiaries were targeted in a cyberattack. Encevo says that the attackers exfiltrated data and rendered data inaccessible. Customers are advised to reset account credentials.

The operators of the AlphV (BlackCat) ransomware have launched a dedicated section on their leak site that allows anyone to search through all the data they stole and leaked from past victims. More in this Resecurity report. 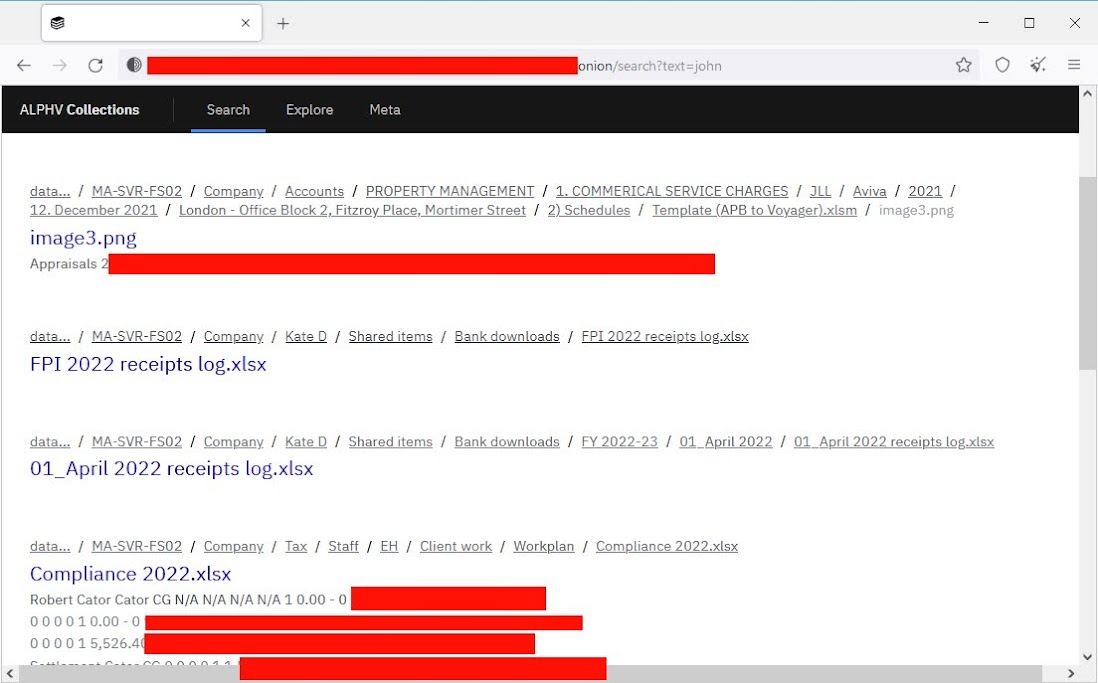 Threat actors are continually spreading the BlackCat ransomware group, raising it up the ranks of the most-used ransomware-as-a-service groups. Security researchers have seen different threat groups deploy BlackCat, sometimes after using Mimikatz as the initial infection vector and a credential dumper. Microsoft recently found that two of the most prolific ransomware groups recently switched away from other families like Conti in favor of BlackCat. BlackCat’s been spotted being deployed in regions across the globe, including Africa, North America, South America, Asia and Europe. Microsoft also warned that attackers most often target unpatched Microsoft Exchange Server instances with widely known vulnerabilities. Read more: PROLIFIC RANSOMWARE AFFILIATE GROUPS DEPLOY BLACKCAT By Lindsey O’Donnell-Welch

Microsoft has published a report on the recent operations of the BlackCat/ALPHV ransomware-as-a-service (RaaS) operation. Microsoft said BlackCat’s for-rent ransomware had been adopted by several of the major underground cybercrime gangs such as DEV-0237 (aka FIN12) and DEV-0504 (a prolific ransomware affiliate on many other RaaS programs).

In addition, there is a new report that the BlackCat group is now using clear web websites using domains personalized to fit their victims as a way to threaten and leak data from some of their targets.

The FBI has published a TLP: White Flash alert that includes indicators of compromise (IoCs) for Black Cat, also known as ALPHV, ransomware-as-a-service. Black Cat is the first known ransomware to be written in Rust. The ransomware’s operators appear to be focusing on industrial organizations. In addition to the IoCs, the Flash alert includes technical details and recommended mitigations. In addition, “the FBI is seeking any information that can be shared, to include IP logs showing callbacks from foreign IP addresses, Bitcoin or Monero addresses and transaction IDs, communications with the threat actors, the decryptor file, and/or a benign sample of an encrypted file.”

Seaports in Germany, Belgium, and the Netherlands have reported IT disruptions following what appears to be a cyberattack. Authorities are investigating the incident, which affects SEA-Tank, Oiltanking, and Evos terminals. Germany’s Federal Office for Information Security (BSI) says the BlackCat ransomware group may be responsible for the attack.