Every business relies on IT networks to function – which makes every business a target for today’s advanced DDoS attacks. It’s now incredibly easy for anyone – from criminal organizations to bored teenagers – to acquire advanced DDoS packages and launch powerful attacks that disrupt business operations and compromise sensitive data. 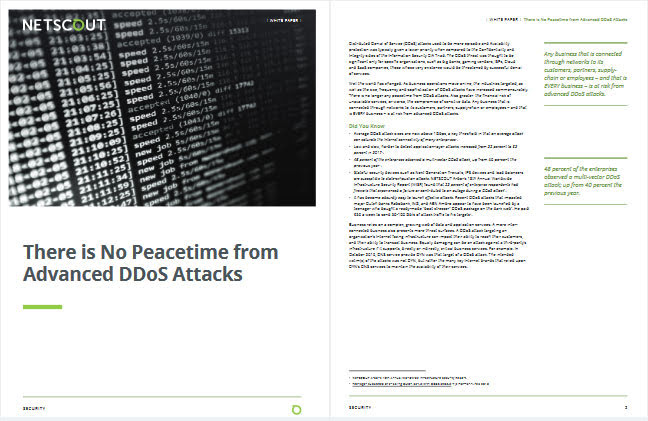 In the new world of advanced DDoS threats, business and IT leaders in every organization need to understand the extent of their risk exposure and reassess their protection.

Read our whitepaper to learn how the size, frequency and sophistication of DDoS attacks have increased. Discover the key capabilities that can bolster your security and help mitigate the increasing financial, operational and reputational risks to your business.

Read on this article to learn:

Distributed Denial of Service (DDoS) attacks used to be more episodic and Availability protection was typically given a lower priority when compared to the Confidentiality and Integrity sides of the Information Security CIA Triad. The DDoS threat was thought to be significant only for specific organizations, such as big banks, gaming vendors, ISPs, Cloud and SaaS companies, those whose very existence would be threatened by successful denial of services. Well the world has changed. As business operations move online, the industries targeted, as well as the size, frequency and sophistication of DDoS attacks have increased commensurately. There is no longer any peacetime from DDoS attacks. Also greater: the financial risk of unavailable services, or worse, the compromise of sensitive data. Any business that is connected through networks to its customers, partners, supply-chain or employees – and that is EVERY business – is at risk from advanced DDoS attacks.

Business relies on a complex, growing web of data and application services. A more interconnected business also presents more threat surfaces. A DDoS attack targeting an organization’s Internet facing infrastructure can impact their ability to reach their customers, and their ability to transact business. Equally damaging can be an attack against a third-party’s infrastructure if it supports, directly or indirectly, critical business services. For example. In October 2016, DNS service provide DYN was that target of a DDoS attack. The intended victim(s) of the attacks was not DYN, but rather the many key Internet brands that relied upon DYN’s DNS services to maintain the availability of their services.

In reality, DDoS is now weaponized. Bad actors can launch multiple, coordinated attack vectors at the same target at the same time – at the push of a button. As you read this sentence attacks are happening around the world to all types of organizations, some looking to saturate connectivity, some looking to cripple or disable specific target applications. In today’s connected economies, you are as vulnerable as the ‘weakest link’ in your extended network. And remember, recovery takes longer than just bringing targeted systems back online.

According to NETSCOUT Arbor’s August 2018 Threat Intelligence report, DDoS campaigns now involve hundreds of thousands–even millions–of victims who are used to amplify the attack, or end up as collateral damage. Just two examples of the size and sophistication of advanced DDoS attacks:

The new tactics, techniques and procedures (TTPs) of DDoS now rivals that of Advanced Persistent Attacks (APT). Advanced DDoS botnets can be directed in real-time with inbound and outbound control communications. In fact, DDoS attacks have become a core component of many orchestrated campaigns attempting to steal data and/or extort payment. Targeted DDoS attacks can disrupt call center operations or ecommerce processes and then extort bitcoin. Even the threat of a disruption, timed around a product launch, major marketing initiative, or merger/acquisition can serve as a powerful extortion tool.

Advanced DDoS attacks are cheap to deploy and can be launched by virtually anyone with the click of a button. There are malware downloaders for sale, e.g. Kardon Loader, which offers the ability to tweak the bot, making it harder to detect. And it is not just hactivists. Nation States and crimeware organizations now include DDoS attacks as part of their TTPs and use them in coordination with other attack vectors during well-orchestrated attack campaigns. For example, Hidden Cobra is a North Korean APT group that actively targets corporations, with a heavy emphasis on financials. Hidden Cobra’s TTPs include DDoS botnets, keyloggers, remote access Trojans (RATs), and wiper malware – just to name a few.

The Role of IoT Botnets

Billions of connected Internet of Things (IoT) devices present a tremendous opportunity for DDoS attackers because they:

Corralled together by botnet malware compromised IoT devices can quickly drive significant volumes of traffic, use different protocols, propagate automatically, and be controlled remotely. One example is the Mirai malware used in the attacks on Dyn. The original Mirai malware code was published in 2016, and NETSCOUT Arbor has seen modified versions of Mirai wreaking havoc ever since. Variants include:

Another variant, OMG, adds an HTTP and SOCKS proxy. Depending on how the device is connected, the bot author can scan and pivot to internal, private networks connected to the infected IoT device. Internal devices can then be used to launch attacks from within. This is a fundamental change and shifts the way we need to think about DDoS detection and defense – specifically intercepting command and control (C2) communications leaving an organization.

The point is the sophistication of DDoS attacks is on the rise. Unfortunately, DDoS attack protection, when compared to other forms of cyber protection, is often neglected.

The Importance of Contextual Threat Intelligence

For security practitioners inundated by alerts, false positives and false negatives, spotting the real threat is a constant challenge. Adding context to an Indicator of Compromise (IoC) allows security professionals to better prioritize their efforts. Context can include recent activity, likely targets and relevant TTPs. Armed with this data security professionals can more quickly answer critical questions such as:

But protection from advanced DDoS requires more. Advanced DDoS protection requires quick identification and blocking of inbound and outbound communications that may indicate risk from internal DDoS, or from another form of advanced DDoS botnet. Reputational threat intelligence (IP addresses, domains and URLs), is just the baseline. Contextual threat intelligence has become critically important for quickly, and more efficiently detecting and mitigating advanced DDoS attacks that are increasingly being used as vectors in well-coordinated attack campaigns against an organization.

The reality is there is no longer any peacetime from advanced DDoS attacks. Have your DDoS attack defenses kept pace?