Organizations in every market sector are migrating to the public cloud, even those not typically associated with technology. This trend is growing because of the increased flexibility and agility the cloud offers. Whether these applications are web servers or critical business apps, they must execute with the same level of performance, security, and compliance.

In a traditional data center, these needs are met by providing robust monitoring with copies of the traffic that moves through your physical network infrastructure. When you move workloads to the public cloud, however, you no longer have access to that infrastructure. How can you provide your tools with the data they need–to identify active cyber threats, monitor user experience, and diagnose application issues?

Migrating workloads to the public cloud is widespread but brings with it the challenge of accessing network data. Achieving Network Visibility in the Public Cloud provides an inside look at these challenges and the best way to solve them.

Whether your current or potential cloud workloads represent web services or business-critical applications, they need to run with the same level of performance, security, and compliance as traditional data centers — and that requires visibility. You’ll need a solution that is intelligent, resilient, and proactive.

This article explains how to achieve total network visibility when you use the public cloud.

Organizations in every market sector, even those not typically associated with technology, are migrating workloads to the public cloud. This trend is growing because of the increased flexibility and agility the cloud offers. Whether cloud workloads represent web services or business-critical applications, they must execute with the same level of performance, security, and compliance as in traditional data centers.

In the data center, network engineers make copies of packets that pass through their physical network devices and forward them to monitoring tools for inspection and analysis. When an organization moves workloads from the data center to the public cloud, the IT team no longer has physical access to the infrastructure. However, the need to monitor packets remains —to identify active threats, monitor network performance, and diagnose application issues. How do the teams responsible for the security and network operations get visibility to the data they need?

To understand these challenges within the context of a cloud environment, let us take a step back to see why organizations opt to move to the cloud.

There are several advantages:

The advantages of the cloud come at the cost of not having the same level of access and control. A significant challenge preventing many companies from moving critical workloads to the cloud is the absence of independent application-level monitoring and analysis of workload behavior.

Also, the services offered by cloud providers for security and performance monitoring may not include access to packet data. This data is a requirement for most security and performance monitoring. Cloud providers move workloads as needed to maximize the use of their infrastructure and often cannot isolate a specific client’s packets within their network.

There are three main challenges to enabling visibility to monitor public cloud infrastructure:

The solution to address these challenges is a cloud-native visibility platform that operates completely in the cloud and requires no physical infrastructure. Ixia is the only network visibility provider to offer a cloud-native solution. Enterprises can deploy Ixia CloudLens either as a service in the cloud or as a self-hosted private cloud solution. At its core, CloudLens is a containerized microservice that provides users with access to the packets processed in their clouds (Figure 1). CloudLens is a serverless design that enables unlimited scalability. The architecture has two major components. 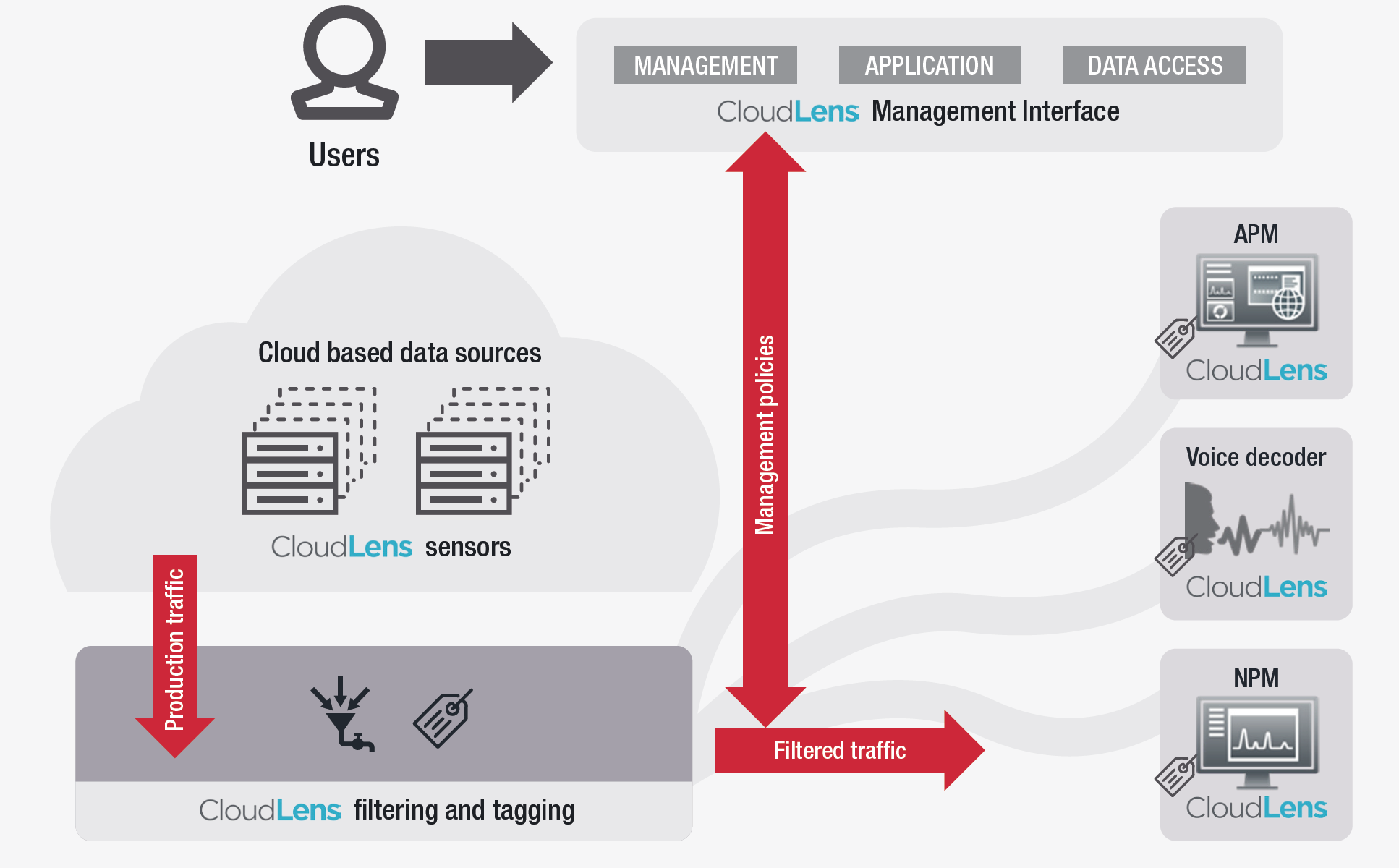 You install CloudLens visibility sensors as Docker containers on both your data sources (which require monitoring) and tool instances (which analyze the data). Container technology allows the sensors to access packet traffic flowing through your cloud instances, filter the traffic, and forward it as metadata to the CloudLens central management platform.

CloudLens users manage the sensors installed in the data source and tools instances from a centralized management interface that runs in the cloud and is remotely accessible. CloudLens takes a comprehensive approach to managing cloud visibility.

Working together, the source and tool sensors, the centralized management platform, and the secure visibility path address the challenge of providing visibility within the public cloud.

Figure 2. Filtering and delivery policies can be applied to predefined groups

Ixia’s cloud visibility solution is platform-agnostic to minimize complexity. Whether you are using public clouds from different vendors or operating private clouds on different hypervisor platforms, CloudLens lets you access all the packet data that flows through your clouds.

As enterprises move key workloads to shared cloud infrastructure, they must have access to cloud traffic to maintain network security and optimize performance. In the cloud, the filtering rules you use to select packets for monitoring must be dynamically applied as clouds instances appear and disappear. Ixia CloudLens has a serverless architecture with a cloud-based management interface to ensure the right traffic gets to the right tool continuously. This design delivers intelligent, resilient, and proactive public cloud visibility.