Not only will the new Fifth-Generation (5G) wireless infrastructure open the door to new applications, but it will greatly improve the applications that exist today for 4G and earlier wireless generations. With the 5G network’s enhanced performance, communication will be faster, with improved interactivity resulting from a significantly lower latency. That’s great for the consumer experience as well as for machine-to-machine (M2M) communication. 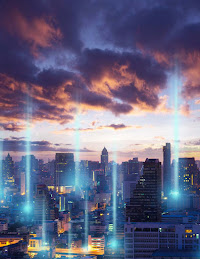 5G will include three classes of services, all delivered through a single mobile network:

This article explores how 5G enhancements will improve existing applications and create a platform for even more innovative applications.

The earliest and largest implementation of the 5G network will focus on bringing Internet connectivity to consumer smartphones and tablets. With the speed and low latency of 5G wireless connectivity, consumers will also see 5G connectivity as the conduit to Internet access not just for consumer devices but also for homes (fixed wireless access). Technology such as beamforming (which can focus a signal as a beam that points toward a user rather than broadcasting in all directions) will improve the integrity of the user’s signal while minimizing signal interference to other users.

In virtual reality (VR), a headset constructs a synthetic (computer-generated) world with which a user can interact. The VR headset includes real-time head tracking that enables the view of the world to change based on the user’s control. Augmented reality (AR) does not construct a synthetic world; instead, it overlays synthetic objects onto a user’s view of the real world using either a headset or smartphone.

Both technologies will benefit from the advanced capacity of a 5G network: 5G speed will support construction and transmission of a synthetic world from a remote cloud (called cloud rendering) to a VR device. 5G low-latency communication will permit a quick response to head movements, rendering only what’s necessary for a user’s current view of the world.

The Internet of Things

The Internet of Things (IoT) refers to an Internet connectivity to everyday objects (e.g., dishwashers, doorbells). The speed and capacity available with 5G will lead to an explosion of new IoT devices and services, but not until the cost is reduced. In part, this expansion will be the outcome of the 5G network’s ability to connect to a large number of devices in a small area (i.e., a million endpoint devices in a square meter area). One way 5G may support communication to a large number of devices in an area is through what’s called multiple-input, multiple-output (MIMO). MIMO can involve increasing the number of antennas for a base station to widen its network capacity; it can also refer to sending and receiving more than one data signal over the same radio channel using multipath propagation. In either case, it means greater capacity to communicate with more devices without the requirement of additional radio spectrum.

Autonomous vehicles (AVs) are automobiles that can navigate without human input—for example, a self-driving car. AVs work today without the 5G wireless infrastructure, but with faster, lower latency 5G communication, new services will become possible for the emerging AV technology. Such improved communication could offer a range of services for a driver or passengers, including entertainment (e.g., video, music) and broadband access. A driver could benefit from automatically adjusted navigation and routing through integrated accident or severe traffic updates or benefit from vehicle-to-vehicle (V2V) communication to optimize traffic flow, such as through creating a localized coordination of lane changes between vehicles.

Surveillance, or video- and audio-based monitoring of activities or behavior, will experience significant changes with 5G technology. Most surveillance solutions today rely on Internet Protocol (IP) networks, which are connected through Wi-Fi to an Internet service provider (ISP) that can offer limited bandwidth. Many of these solutions permit two-way communication, but this communication can be hindered by IP networks that are asymmetric (i.e., that have high download speeds but slower upload speeds). The available bandwidth that a 5G network will offer will enable smooth streaming of higher-resolution video, such as 1080p high-definition (HD) video, which third-generation (3G) or fourth-generation (4G) wireless networks cannot easily support.

The speed of 5G communication will support real-time face detection and recognition in the cloud. As a camera grabs high-resolution (hi-res) frames of video, it will be able to upload each frame into the cloud for processing. This process can be optimized by performing face detection at the camera and then distributing the detected faces (the framed regions for each given face) to independent servers in the cloud. This step will facilitate better use of the 5G infrastructure because the images sent to the cloud will be smaller and can then be processed as they are received, parallelizing the complex recognition process.

A smart city is one that deploys various types of IoT sensors (representing meters, controllers, lighting, displays, etc.) and uses the resulting data in a way to manage a city and its resources efficiently—including transportation, power, water, waste, crime, and pretty much any area of a city that can produce data. For example, as waste vehicles collect recyclables, they can calculate mass and predict the flow of trash to waste facilities and determine the facilities’ ability to process the waste.

The idea of a smart city has been around for more than a decade, but what has been missing is a way to efficiently communicate with the mass of sensors that exist within a city: For example, where sensors distributed around an area can detect flooding (including depth and flow). 5G technology provides the platform through which all these sensors can coexist and communicate between themselves and centralized cloud infrastructures. Only a 5G wireless network can support the scale of data that IoT sensors produce and amass at the scale of a city, with the cloud providing the scalable processing necessary to manage this elastic set of processing demands.

The application of a 4G network commonly occurs in delivering content to endpoints such as phones or tablets: Consider users watching videos on their devices. Some types of data, such as sporting events or concerts, delivered in real time cause issues. Even if many users are streaming the same content, the network delivers it independently to each user. Multimedia Broadcast/Multicast Service (MBMS) enables users to share the content delivered through one stream, reducing the bandwidth that the data uses. This functionality has been extended with MBMS on demand (MOOD), which allows dynamic switching from a unicast to a multicast delivery when the number of devices accessing the same content exceeds some defined threshold. With the growth of content that will travel through the 5G network, MOOD can transform digital television.

Cloud-based gaming (also called gaming on demand) enables users to play a game the cloud hosts on a peer device (such as a smartphone, computer, or smart TV), where the game video-streams to the peer device in much the same way other videos stream. The recently announced cloud-gaming platform developed by Google®—called Stadia™—could be a significant recipient of 5G capabilities. The platform pushes the high-level computation of a game and video rendering to the cloud using a peer device, such as a tablet, streaming the game video and taking user input for game control. 5G bandwidth and low latency make it ideal for gaming in the cloud.

Another interesting application of this new, fast 5G conduit is the so-called Storage as a Service, which extends the storage capabilities of a device by employing elastic storage in a cloud infrastructure. Equipping a device with cloud-based storage makes your data secure, not tied to a given device. The result is data sharing between devices as well as an increase of reliability and availability of the data through cloud-based data protection. It also opens availability to a user’s full library of content, which can otherwise be limited by the storage capability of an end device. A 5G network offers the bandwidth and latency to empower this application.

As technology evolves, it eventually reaches the limits of what’s possible. Product developers then attempt to work around the limitations to fit their features into the available technology. The new 5G wireless infrastructure provides the platform and technological leap to extend communication limits for a new frontier of product offerings. Whether the limitations result from bandwidth, latency, or density, the 5G network represents a catalyst for new products and new experiences for consumers. 5G technology also provides a new fabric for mixed computing environments such as the IoT, where devices continue to rely on cloud-based infrastructures.